by Patrick Quinn and Eric Shuster

We at Pluto were hugely saddened to learn that Bill Pelz passed away last weekend. Bill wrote A People’s History of Modern Europe and was completing revisions to his manuscript for the forthcoming A People’s History of the German Revolution when he died. Bill was also the editor of a new Pluto book series of people’s histories which will be launched in autumn 2018.

Bill was a warm, generous, and very kind man, with great curiosity and encyclopaedic knowledge. He will be sorely missed by us and by his many friends and comrades. We extend our deepest sympathies to his wife Adrienne.

In this obituary, Eric Schuster and Patrick Quinn remember their colleague and friend.

Bill Pelz, a well-known socialist activist and prolific scholar in the field of European and comparative Labor History died at the age of 66 in Chicago on Sunday, December 10, 2017, following a heart attack.

Bill was born into a working class family on the South Side of Chicago. After graduation from high school he became a bus driver, ‘but later lowered my expectations and became an academic historian’. An SDS member for a brief time before its demise, he joined the Chicago branch of the International Socialists (IS) at the beginning of the 1970s and soon became one of the best known leaders of the Left in 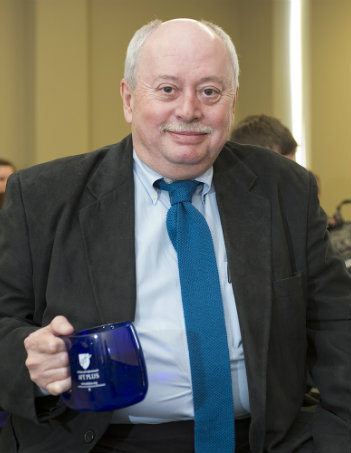 Chicago.  He was an early member of the Red Rose Collective, along with historians Mark Lause and David Roediger, and later a long-time member of the New World Resource Center. Both were radical Chicago book shops and important local organising and information centers. He helped organise Chicago’s first Rock Against Racism concert, and later joined Solidarity, served as International Secretary for the Socialist Party USA, and was the Chicago Political Education Office for the Democratic Socialists of American (DSA).

Bill became a Chicago-based academic scholar and professor of history and political science, first at Roosevelt University; then DePaul University, where he was Director of Social Science Programs; and for the last 20 years a popular and award-winning faculty member at Elgin Community College. He received a history PhD from Northern Illinois University, where he studied with Marxist Historians Meg and C.H. George, completing a dissertation on the German Revolution and the Spartakusbund.  He founded and lead the Institute of Working Class History, co-founded the International Association for the Study of Strikes and Social Conflicts, and helped edit the Encyclopedia of the European Left. Bill also served on the board of the Illinois Labor History Society, which oversees the Haymarket Memorial and the Haymarket Martyrs’ Monument.

As a scholar Bill produced many books and articles, including A People’s History of Modern Europe (2016), Karl Marx: A World To Win (2011), Against Capitalism: the European Left on the March (2007), The Spartakusbund and the German Working Class Movement (1989), and Wilhelm Liebknecht and Germany Social Democracy: A Documentary History (2016). Also of note, Bill edited the Eugene V. Debs Reader (2000) (2007), with an introduction by Howard Zinn.  For many years Bill published film reviews in Film & History: An Interdisciplinary Journal of Film and Television Studies.  At the time of his death A People’s History of the German Revolution had been completed for Pluto Press.  He also served on the editorial board for The Complete Works of Rosa Luxemburg, and co-edited a forthcoming volume in that series.

Generations of workers, students, and leftists in Chicago looked to Bill for inspiration, good humor, generous friendship, and political curiosity.  The international academic community widely admired his commitment to revolutionary principles, and in that milieu he was known as a careful, serious, and rigorous historian.  He will be sorely missed.  He is survived by his wife, Dr. Adrienne Butler.  A memorial service for Bill will be held in Chicago in January 2018.