Derry Shouts, the World Hears
50 years on from the day 'the Troubles' began

by Maev McDaid and Brian Christopher

The 5th October marks the 50th anniversary of the march often cited as the day ‘the Troubles’ began. However, it is often written out of the memory of 1968 global uprisings and instead lost to the history of years of sectarian violence that followed. Maev McDaid and Brian Christopher look back at the spirit of ‘68 in Ireland, and why its memory is still relevant 50 years on.

Until the 10th October, a selection of our books on Irish politics are available with 40% off. From Dennis O’Hearn’s riveting biography of Bobby Sands to Kieran Allen’s foray into the politics of James Connolly, these books cover many aspects of the proud, radical tradition in both the North and the Republic of Ireland. Check out the sale here.

Ireland was partitioned in 1921, when what was officially known as the Parliament of Northern Ireland was created under the Government of Ireland Act. This Parliament, or Stormont, sat until March 1972 under Unionist rule, in what Michael Farrell dubbed ‘The Orange State’. By 1968, Stormont, as well as the Protestant majority City Corporations, had overseen four decades of institutional discrimination and inequality towards the Catholic minority. The Special Powers Act that existed at the time also meant internment without trial for hundreds of young people whose ‘crime’ might be speaking Gaelic, wearing a GAA sports top or belonging to a “Republican family”.

Despite fervent claims from the Unionist Party that Belfast was as British as Bristol, the ruling elite and their allies were unwilling to guarantee the democratic gains that had been made in Britain in the 20th Century, such as universal adult suffrage. The result was that ‘Loyal Ulster’ was a puritan-dominated backwater. While women in Britain were celebrating the Abortion Act of 1967, Catholic women in Derry were denied even a vote – of course we still do not have reproductive rights. As such, a generation of Catholics who were utterly failed by the Political Establishment and Institutions, went on to the streets across the North of Ireland to challenge discrimination and poverty. And this generation did not just look back to Irish history for inspiration, but looked out all over the world – to Vietnam, to Mexico, to France and to the United States – they switched on their TVs and saw a world alive with protest and were deeply connected to something bigger than themselves.

In 1964, after years of neglect in social housing, the Campaign for Social Justice was set up in Dungannon to shed light on the injustice that Catholics faced, particularly in the area of housing.  In the years of the long 1960s, facing injustice in jobs, housing, political life, and harassment from the authorities, the Civil Rights Association (CRA) was formed in early 1967. Their five key demands were:

The CRA looked to the Black Civil Rights protests in the US adopting their tactics and slogans. Comrades in Paris came to Belfast to give tips on street fighting. Eamonn McCann speaks of the telegrams that were sent from the GPO in Derry to Prague and across the world, to express solidarity with their struggle. A truly non-sectarian ambition, embedded in internationalism and solidarity, the Unionist powers that be were determined to destroy it. William Craig, who was the then Home Affairs Minister, would tell the press that CRA was just a front for the IRA. Therefore, many Protestants genuinely believed this was a papal or republican conspiracy, despite the focus purely being on Civil Rights.

After 18 months of growing agitation, from rent strikes and squatting, to protests and sit-ins, the CRA called a demonstration in Derry for Oct 5th 1968. The march prior to this held in the summer of ‘68 from Coalisland to Dungannon was big, but passed without incident and thus did not gain the necessary media coverage. While the movement continued to grow in size and ambition, the organisers knew that another march would be essential to shed light on their situation. 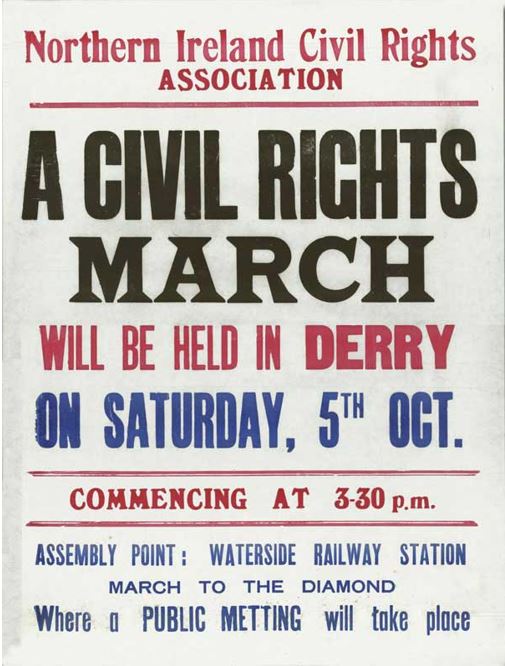 The organisers wanted to show that they represented the class and not religion so chose a rally point in the traditionally protestant Waterside area, marching to The Diamond, the historic centre point of Derry’s citadel-style walled city, an almost sacred site in protestant folklore. As the march was banned, and the riot act read out, confrontation with the baton-happy constabulary was inevitable – there was no turning back. It is important to note at this stage that the movement was thoroughly non-violent – inspired by the masses of American marchers, pickets and freedom riders. It was the state that created violent scenes, to which the defenceless people, often living in slum conditions, responded. When protesters defied the ban, they were met with water cannon and baton-charged by thuggish police. As with Prague and Paris, we see the brutal suppression of young people whose ideas for society were more ambitious than generations before.

In that moment, the protestors had caught a glimpse of how things might be – that the world could be different and they were prepared to fight for it. However, as the organisers themselves would admit, they didn’t have the structures needed for a mass movement and also missed the opportunity to be able to build a on the genuinely non-sectarian opportunities for radical change. The more the state responded with its imperial arsenal, the more the struggle took on a course of national liberation.

The years of violent killings that followed, known as ‘The Troubles’, were not brought about by ethnic civil war or the sudden boiling over of tensions between Protestants and Catholics. It was ignited by the failure – the inability – of the state to respond to the hopes and dreams of the 60s generation to live in a society that was fairer to all. Across the world a new confident working-class was mixing with an increasingly educated youthful generation. Students and workers were finding common ground and questioning all forms of authority. But in Ireland, they were faced with a power who was prepared to go to war with them on their own streets. It wasn’t long before Britain’s paratroopers were firing rounds on children.

So, when thinking of 1968, it’s important to remember the tiny minority of a small province who, on a small Island on the edge of western Europe, facing the British Empire, emboldened by ‘68, really did make history. And it’s a radical, non-sectarian, internationalist history to be proud of.  The Civil Rights Movement happened because the optimistic expectations of this generation outstripped what a sectarian regime could offer them. Demands for fair housing, jobs and employment rights and democratic reform eventually came up against a state rotten to the core – a familiar tale to those of us who have endured the long years of sectarianism and austerity.

We live in a very different context from 1968. Orangeism has been wounded and the conservative nationalism that influenced Catholics in those days, together with the reactionary influence of priests in the community, has been shattered. But the issues of jobs, housing, deprivation, low pay and lack of political representation are sadly familiar. But there is reason for great optimism. People power is back. In recent years on this island we’ve seen victories against water charges, the incredible campaign for marriage equality. The movement to repeal the 8th amendment pulled together groups from across the country and became what Eamonn McCann called “not a movement for a united Ireland but a movement of a United Ireland.”  The opportunities for working class unity are arguably more open today than they were back then. But there is no room for complacency. We have seen how the leaders of green and orange nationalism will call upon their “own community” and polarise debates along arbitrary sectarian lines to increase their votes.

There is huge work to be done in facing down the bigotry and sexism in our society. This week Arlene Foster told gay journalist Owen Jones that opposing equal marriage was her right and that to suggest otherwise was to “live in an intolerant society”. Yet victims of everyday sexism, homophobia and racism know too well that the actions of the state promote and endorse these prejudices – from the scandalous rugby rape trials to the denial of basic healthcare and the horrendous treatment of migrants and asylum seekers.

Faced with these issues it is easy to see why a new spirit of ‘68 is urgently needed. We cannot call upon a defence of the status quo as a solution. Media-friendly stunts against Brexit are not going to address the root of the problem in Ireland. This is why those who see an appeal to the European Union and the forces of “remain” are squandering their time and effort. Neither the EU nor Britain have a history of respecting democratic legitimacy in these parts. We must rely upon only ourselves and the international allies in the movements who struggle to make the same gains.

No economic question can be confronted without tackling the political situation: Stormont’s lack of legitimacy; the role of the state in making the north of Ireland a bonanza of neoliberal non-development; the shocking callousness with which London and Brussels negotiate Ireland’s future behind the backs of those who live on the border; and the intolerable situation whereby we are directly ruled from Westminster where the DUP enjoy power through Theresa May in Parliament. The question of the state will always bear down upon us, dividing us on sectarian lines and drawing borders around us, until such times as our movement is strong enough – and Ireland United enough – to dissolve not just the hard border, but partition itself. 50 years later, there has never been more need for a united anti-sectarian, working-class movement for justice in our society.

Brian Christopher is a teacher in London and Maev McDaid is a PhD student in Sheffield, both are originally from Derry. See their previous blogs for Pluto, on the Good Friday Agreement and on the DUP here. Listen to Maev McDaid on our Repeal the 8th podcast here.