by Derek Wall
BUY THE BOOK

Derek Wall, author of the new book Elinor Ostrom’s Rules for Radicals, which reveals the indispensability of Ostrom’s work for green politics, left economics and radical democracy, considers what advice the economist and first female recipient of the Nobel Prize for economics might say to Jeremy Corbyn on his first day as Prime Minister.

Derek Wall will be launching the book on Friday 1st December at the Word Bookshop. See here for more details.

What advice would a Nobel Prize winning economist give Prime Minister Jeremy Corbyn on his first day in office?  Elected twice as leader of the Labour Party, seen off the tabloid media and boosted his party’s vote this year, the prospect of a Corbyn premiership looks more likely than ever.

Yet it could be a bitter victory, as Britain’s economic problems, which are likely to grow if Brexit goes ahead, might make it difficult for him to make good on his promises.  One source of advice might be Elinor Ostrom, the first – and so far, the only – woman to win a Nobel Prize for economics. Sadly, Ostrom is no longer with us, having died in 2012. However, having met both Elinor and Jeremy, who are in many ways rather similar characters, modest, radical and charismatic, I think it would be instructive to consider what she might tell him.

According to the awarding Committee, Ostrom won the Nobel ‘for her analysis of economic governance, especially the commons’. She is best known for her book 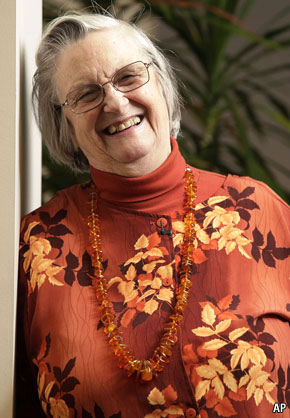 Governing the Commons, first published in 1990, which theorises collective forms of ownership.  In Britain, Ostrom’s concept of the commons takes the form of land which is open to members of a community to graze livestock, fly kites or walk upon. Fisheries and forests may be commons, and the concept as a legal form has been extended to free software and the Internet.

Increasingly, the notion of the commons has been adopted by the left as a form of social collective ownership, perhaps forming a foundation for communism. Ostrom’s work in Governing the Commons was far more modest.  In the book she challenged the concept of ‘the tragedy of the commons’.  It had often been argued that collective ownership was bound to fail because commoners would not be able to agree on how to conserve the commons.  For example, common land might become over grazed. Elinor instead found that often commoners could cooperate to conserve.  She spent her career studying both the commons and cooperation, looking at the nuts and bolts of successful collective ownership and management.

Like Jeremy, Elinor Ostrom was very concerned with inequality and saw it, rather prophetically, as destructive of democratic institutions:

‘Inequality is dangerous. When the rich are floating at too extreme altitudes, they are completely unable to understand the needs of the poor.  When there are more and more rich, and thereby people who think that they are something better, that is detrimental to a democracy.’[i]

Inequality, to a considerable extent, is a product of ownership; if a minority own property in the form of homes, land, shares and other forms of wealth, inequality will rise.  Ostrom focused on property rights.  Share the property and you gain a more equal society. For example, in Britain, property ownership is highly unequal. A tiny minority own most land; the Duke of Westminister’s huge estates cover much of Central London.  Property rights are rights to wealth and wealth generates income.  So, without consideration of notions of land reform and other changes in property rights inequality may persist and deepen.

Rather boldly, her Nobel lecture was entitled ‘Beyond Markets and States’.  She believed that much economic activity could be undertaken directly by communities, bypassing both centralised state control and market activity. This notion of an element of collective ownership is more and more important in our economy.  Paul Mason has argued in PostCapitalism that three-dimensional printing and the accelerating importance of cyberspace mean that we could have a very different kind of economy. Increasingly, culture and knowledge are key to our economy and increasingly they are free.  The neoliberal idea of corporations running the economy and being supported by the state no longer works. The rise of information monopolies threatens to create a platform capitalism where automation is used to destroy jobs; where work that does exist is insecure and profits flow to billionaires.  This is the economy of Amazon, Google, Uber and such like.  Elinor argued that collective ownership of knowledge was vital.  So rather than nationalising such companies, as Corbyn proposes, co-operatising and running collectively would work as a viable alternative.

A good example of this is Wikipedia, the online encyclopaedia also functions as a commons run by those who use it.  This is a different model to a government controlled committee or a hypothetical free market encyclopaedia.  While Jeremy Corbyn is often seen as a new Atlee, wanting to nationalise industries, the Ostrom model of running collective community platforms might be attractive to him.  Why not create community platforms for a diverse and democratic economy with the collective income generated going to us Brits rather than platform billionaires?  The bonfire of jobs created by automation could lead to either an economy where most of us are in poverty, or to shared prosperity.  Communal ownership of three-dimensional printing facilities, like fab labs, could mean we produce directly more and more for our needs and desires.

Elinor also rejected the idea of broad slogans and panaceas. Governments could mess up, markets could lead to unforeseen consequences and commons in terms were imperfect. She would have advised that for an economy to work well you need diversity, there is rarely one solution. A good example is housing.

Housing perhaps is the key to Corbyn’s popularity.  The under 40s are increasingly either living with their parents or struggling to get by at all if this isn’t an option.  The UK property market is broken, houses are speculative commodities, too expensive for many of the young to afford, and house price bubbles build chaos into our economy.  I am sure Elinor would have advocated building more social and council housing but an Ostrom approach means putting in self-build and community housing.  In fact, she and her husband Vincent, built their own home.  Putting in tax breaks and teaching self-build from sixth form onwards would be a practical policy to build in housing diversity.

The democratic deficit has also propelled both Corbyn and less positively Brexit and UKIP anti-migration feeling.  Democratic institutions in Britain look distant, we lack an effective voice and frustration is a source of both rebellion (good) and fear of the other (easily transformed into racist hate of the other). Ostrom believed in self-government, in decentralising power and diversifying political institutions. Giving funding and independence to local government is part of her vision but also promoting real political education, so from school age onwards we learn to take power. She would advise fostering more and more decision-making power at the grassroots:

For those who wish the twenty-first century to be one of peace, we need to translate our research findings on collective action into materials written for high school and undergraduate students. All too many of our textbooks focus exclusively on leaders and, worse, only national-level leaders. Students completing an introductory course on American government, or political science more generally, will not learn that they play an essential role in sustaining democracy. Citizen participation is presented as contacting leaders, organising interest groups and parties, and voting. The fact that citizens need additional skills and knowledge to resolve the social dilemmas they face is left unaddressed.[ii]

Ostrom would have had a lot to say about universities, another source of disquiet for young British voters.  While she was not a radical critic of the

market, I think she would be worried about the way that higher education is run increasingly like a business.  Student debt is rising, the cash raised is increasingly put into real estate and vice chancellors are often paid obscene salaries. Ostrom believed that academic research should be about cooperation, a form of team work with findings being published open source.  The research culture of individual career advancement, the separation of academic disciplines and articles published in expensive journals, was something she felt was damaging.  She set up her own open source (free to use) journal and a free access digital library of the commons. Making sure that higher education serves the whole community would be a priority she might suggest Corbyn could promote.

Like Corbyn, Ostrom was deeply concerned with the environment.  She certainly would have advised him to make climate change a priority, along with conservation of the Oceans.  Again, ownership is key. She argued that if local communities could control their own environments they would tend to be better at conservation than central government or corporation.  She was an advocate of the ‘Seven Generation Rule’ and would likely urge Corbyn to think of future generations.  She noted:

‘Our problem is how to craft rules at multiple levels that enable humans to adapt, learn, and change over time so that we are sustaining the very valuable natural resources that we inherited so that we may be able to pass them on. I am deeply indebted to the indigenous peoples in the U.S. who had an image of seven generations being the appropriate time to think about the future. I think we should all reinstate in our mind the Seven-Generation Rule. When we make really major decisions, we should ask not only what will it do for me today, but what will it do for my children, my children’s children, and their children’s children into the future.’ [iii]

A Corbyn government could lead to a major change in British history, like Attlee’s in 1945, but this change must sustain something more diverse, ecological and participatory.  The current model based on the primacy of the City of London, industrial decline and rising inequality, is broken.  The alternative to Corbyn as we know is increasingly a bitter, exclusionary and racist future, championed by the likes of Nigel Farage and Jacob Rees Mogg.

Ostrom’s detailed research suggested that by creating diverse institutions, planning what we do with care, and respecting the needs of future generations, we can create a different society based on democratic choice and equality. All of us who want to see a different kind of Britain might do well to look at her potential advice.  Wishing for a better future isn’t enough, we need to plan for it with care, thinking deeply and designing solutions in the face of social and ecological change. 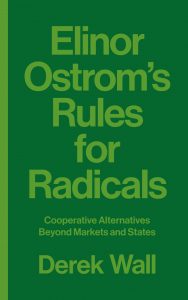 Derek Wall is the author of numerous books including Economics After Capitalism (Pluto, 2015), The Rise of the Green Left (Pluto, 2010) and The Sustainable Economics of Elinor Ostrom (Routledge, 2014). He teaches Political Economy at Goldsmiths College, University of London and was International Co-ordinator of the Green Party of England and Wales.

Elinor Ostrom’s Rules for Radicals: Cooperative Alternatives beyond Markets and States is available from Pluto Press.