by Maev McDaid and Brian Christopher

In June we wrote a cheat sheet on the DUP when the threat of their increased power in Westminster was an all too real possibility following the General Election. We now want to build on that article to offer insights as to why the region is back in the headlines, with the anniversary of the Good Friday Agreement, and the Brexit debate. While some argue that the whole tower will collapse, the reality is that the current ‘border crisis’ has exposed some loose jenga blocks, ripe for plucking. We need to do more than stand by with bated breath – a new system has to be built and that means a rejection of sectarian politics.

This week marks the 20th anniversary of the Good Friday Agreement (GFA), the negotiated framework for the modern Stormont government north of the border in Ireland. The historical Stormont government was disbanded in 1972 amidst the corruption and violence that for 50 years had characterised its existence and worked in the interest of the Protestant majority. That government was complicit in exacerbating the suffering of innocent people, namely the Catholic minority, through gerrymandering, and multiple votes for business owners, job allocations, and in provoking violence at several interfaces in the lead up to, and during, the civil rights movement. For this reason, Michael Farrell dubbed it, ‘the Orange State’. Fast forward to 1998, after almost 30 years marked by conflict and direct-rule from Westminster, the historic achievement reached on Good Friday was celebrated as the prize of the ‘Peace Process’, eliminating the worst aspects of bitter violence associated with the region.

Back then, revolutionaries in Ireland spoke ‘for the peace but against the process’, since that process was ignorant to ordinary working-class people’s voices, focusing instead on the priority of valuing nationalisms. But the process did promise to offer an end to direct rule, military occupation, violence and discrimination, and was deemed an innovative and seemingly fair way to bring the various sides together. Devolved institutions were granted in return for ceasefires and later decommissioning. Major parties would agree to a ‘power-sharing’ government where they could cherry-pick executive positions. A consociational assembly, where members would align themselves to ‘unionist’ or ‘nationalist’ sides, meant that legislation would require a majority from both. Thus, as anticipated by the Left, the GFA has enshrined sectarian divides into law – a legacy that, under the framework, we cannot escape. While we have no illusions about the levels of violence that still exist for many pockets in our society, we, of course, recognise the fundamental shift that the process has brought about. Political negotiations no longer take place in the context of massive bombs and frequent shootings. These conditions have rightly led the majority of people to believe that Ireland will never again fall into violent sectarian strife and murderous politics. Too much has been achieved for that to become a reality overnight. But that does not mean that the status quo offers hope. It cannot solve the key issues facing ordinary people. 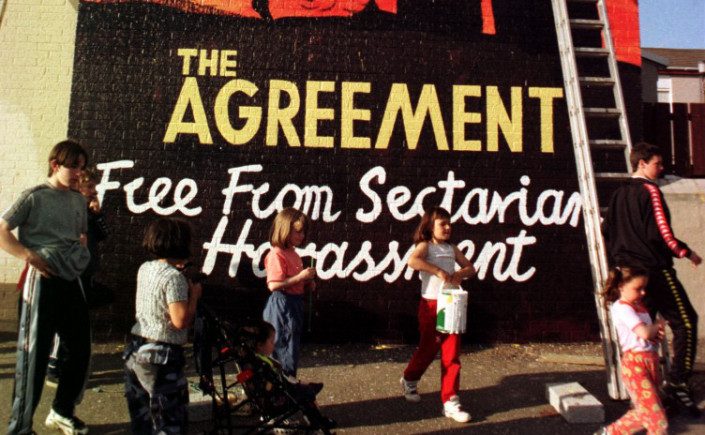 We have now had 20 years where dysfunction has been normalised in the North and yet there are still those who celebrate the GFA uncritically. While the Agreement’s many flaws have led to the regular collapse of the government, some ‘moderate’ voices – despite the current deadlock where the parties will not sit in Parliament together – have called for it not to be undermined. Whilst seemingly benign and well-intentioned, these calls mask a form of conservatism, timidity and lack of imagination. The agreement has proven it cannot be the basis on which a society, plagued by sectarianism, repairs its wounds and forges a future. That’s why the Stormont regime has been defunct more often than it has been operating since 1998.

The decline of political violence should have heralded the emergence of ‘bread and butter’ politics – the growth of trade unions, a focus on class and inequality of all kinds.  But this has not yet materialised – due in no small part to the sectarian expectation embedded in the very ‘solutions’ offered by the GFA. As a result, vital services go unfunded because of debates over recognising the Irish language. It also means working class communities have suffered prolonged and exacerbated segregation and distrust, perpetuated by the ruling parties so as to secure their power. Put simply, the North is governed by what can only be described as ‘a government of managed sectarianism’, where guns are kept out of the political process, but sectarianism remains. This is why Sinn Fein chose the Irish Language Act as its red line for forming a new executive, even though it has little or no support from Unionists. They could have chosen equal marriage, which would have undermined the appeal of all unionist parties amongst their socially progressive supporters. But equal marriage does not distinguish them from other nationalist parties (whom they see as their only competitors) so this is not their concern. As such, we think the GFA could be considered a ‘generational truce’ that has served its purpose, rather than a permanent constitutional settlement.

Though the border debate has been thrown up by Brexit, and the breakdown of Stormont government has arisen from sectarian politics, these are just manifestations of the more fundamental contradiction – that part of Ireland is ruled by Britain. While one island imposes its political will on another, there cannot be peace or equality. Indeed, the referendum result has compelled the British government to ignore the will of the Irish people, such is the inescapable nature of rule by a foreign power. But the border is not the only problem, we have long-term biting austerity, unwillingness to address antiquated public policy and most dangerously, continued direct rule from Westminster – especially as the DUP currently sit in government with the Tories.  Although the unionist tradition had seen a decline in ideological support from Britain, a cabal of puritans now hold Britain to ransom, whilst a collection of Etonion Englishmen stake a claim on the Island of Ireland. The voice of Irish unity is notably absent from Westminster, for the first time in modern history, which is concerning as we continue to face indefinite direct rule.

We appear to be stuck between a rock and a hard place. Neither the British nor Irish governments, major parties, or international institutions have delivered long-term wage growth, investment, development, equal marriage, reproductive rights, integrated schooling or the vital reconstruction required to desegregate the society. But we see the opportunity to demand an end to austerity across the island, full reproductive rights on both sides of the border and meaningful social change that makes our island more equal. Ireland cannot be united by violence or by negotiating new state institutions. It can only be united by taking the urgent struggles to those in power, who like to see communities divided and the poor ignored. This is the only way to create a society where global warming is not blamed on LGBT communities and women’s bodies are not up for debate. As we write this, people across the Island are demanding justice for victims of sexual violence who are repeatedly let down by the state. Where these movements make progress, they establish the conditions where a new type of political system might emerge. That would be world’s away from the stopgap that was agreed in the 1990s.

It’s time to say Goodbye to the Good Friday Agreement. For to champion it and the system it represents, with its tendency to return the most reactionary candidates and exclude progressive voices, is a disservice to the Irish people and we must make that fight. We believe that without a move away from the current system that rewards zero-sum sectarian politics, there can be no representation, justice or equality.

Brian Christopher is a teacher in London and Maev McDaid is a PhD student in Sheffield, both are originally from Derry.