by Charles Forsdick
BUY THE BOOK

The oppression of non-white people didn’t go away. It was transformed; subsumed into structures and institutions; discernible in 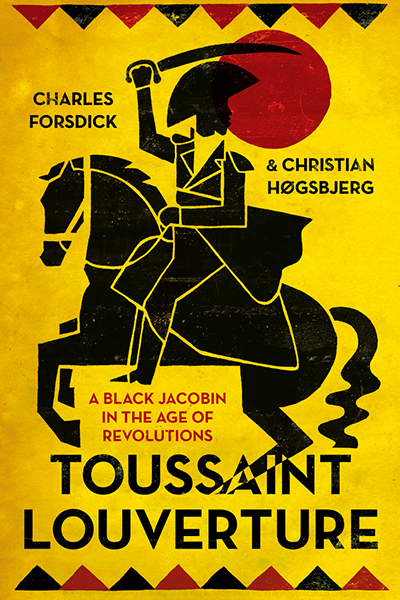 asymmetric economic inequality or a culture that promotes white superiority. It has taken white tyranny to reach the heights of Nazi salutes on the street and the death of an anti-racist protester for the ‘post-racial’ fabrication to die a necessary death.

Contemporary politics is afflicted by an historical amnesia that we must resist. By looking to figures such as Toussaint Louverture, leader of the only successful slave revolt in history, we on the Left can make sense of what informs white supremacy, and what has defeated certain strains of it in the past. In this blog, Charles Forsdick, author of Toussaint Louverture: A Black Jacobin in the Age of Revolutions, examines how Louverture’s legacy has been mobilised in the past and how we can ‘recover and restate the incendiary political implications of his life, actions and revolutionary thought’.

Of the three most notable leaders associated with the Haitian Revolution, it is Toussaint Louverture – as opposed to Jean-Jacques Dessalines or Henri Christophe – who has attracted the most sustained attention in the Atlantic world and beyond. In Haiti itself, Dessalines (known in Haiti as the ‘Liberator’) is the only one elevated to the status of divine lwa in the vodou pantheon, and the national anthem (the Dessalinienne) is named after him, but outside the country Louverture (the ‘Precursor’) has achieved a visibility and recognizability as an anti-imperialist revolutionary comparable perhaps only to Che Guevara. As the scholar Deborah Jenson has claimed, the diverse catalogue of representations of Louverture can be tracked back to his own lifetime when, often acting as his own spin doctor, the leader of the Haitian Revolution deployed self-representation and harnessed early Atlantic print culture as a means of managing the understanding of his actions on a wider international stage. 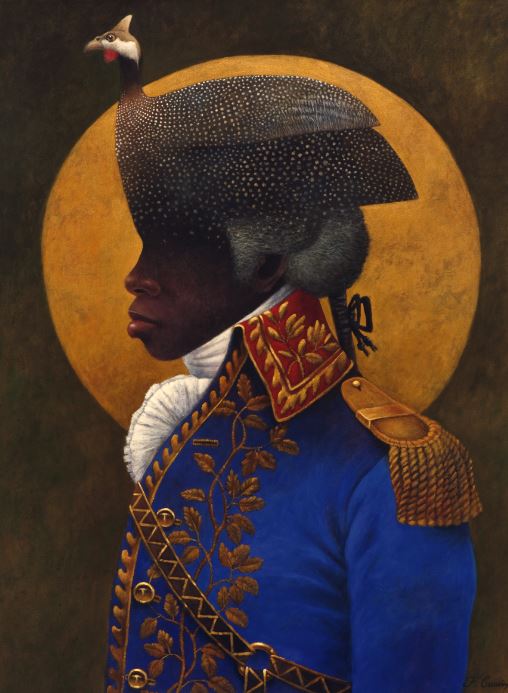 Those interested in representations of Toussaint Louverture are now faced with an encyclopaedic catalogue of two centuries of re-figurings, produced in a wide range of cultural contexts and stretching across multiple media. The earliest appeared when Louverture was still alive: Dubroca and Cousin d’Avallon produced largely denigratory biographies in 1802, the former of which circulated widely in French and Spanish translations; a more sympathetic portrait emerged in 1805 from An Historical Account of the Black Empire of Hayti, the memoirs of the British Army officer Marcus Rainsford, who had been captured and imprisoned in Saint-Domingue in 1799 and had enjoyed face-to-face contact with the Haitian revolutionary leader during that time. Although they would not be published until the 1850s, Louverture produced his own memoirs while imprisoned in at the Château de Joux in the French Jura. These are an attempt at self-justification to Napoleon as he sought to explain the motivation behind his 1801 constitution and his conduct during the struggle against Leclerc’s expedition the following year.

Louverture’s death in 1803 triggered a series of literary and visual representation that continue to proliferate today. Inaugural in this tradition was Wordworth’s ‘Sonnet to Toussaint Louverture’, in fact written whilst its subject was still incarcerated at Joux, a poem projecting a Romantic version of the revolutionary and associating his struggle with that of ‘man’s unconquerable mind’. Other key literary portrayals in the earlier nineteenth century include Harriet Martineau’s novel The Hour and the Man (1839) and Lamartine’s play Toussaint Louverture (written 1840; performed following abolition in 1850), both of which reveal the persistence of Louverture in European abolitionist movements.

In parallel to these often mythologizing literary representations of Louverture, a complex historiographic tradition has also evolved. This emerged in earnest in Haiti 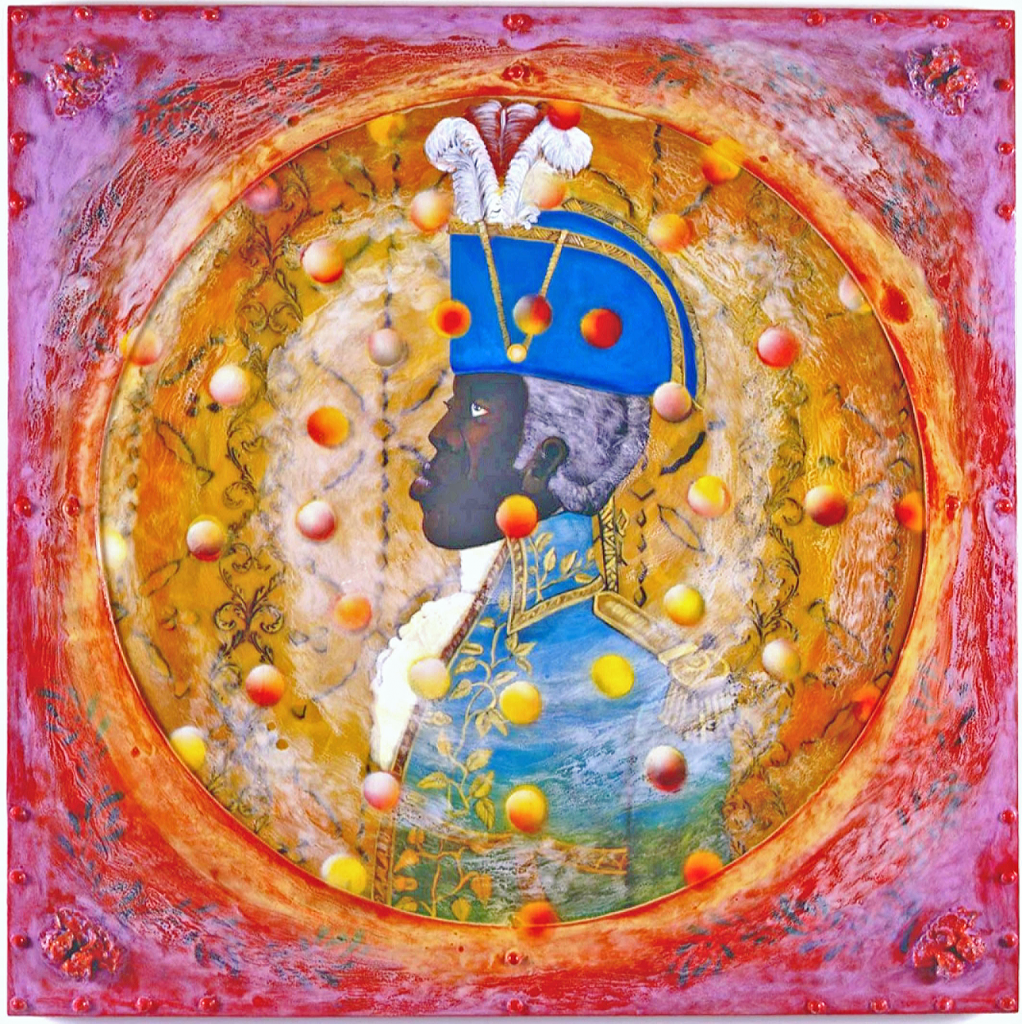 itself in the middle years of the nineteenth century, in the work of historians including Thomas Madiou and Beaubrun Ardouin, whose interpretations of Louverture contributed to the competing ‘negro’ and ‘mulatto’ legends of Haitian history. The later nineteenth century saw the appearance, in France and the USA, of more hagiographic biographies, by authors such as Victor Schoelcher and Wendell Phillips, who sought to secure the abolitionist legacies of Louverture’s life. At the same time, the Haitian revolutionary leader played a key role in Anténor Firmin’s De l’égalité des races humaines (1885), a retort to Gobineau’s racist tract that foregrounded human inequality and an early statement of what would be later known as Negritude. The U.S. occupation of Haiti (1915-34) turned international attention to the country, triggering a cluster of re-figurings of Louverture, not least in Soviet Russia where Anatolii Vinogradov wrote the major novel The Black Consul and Sergei Eisenstein sought to make an ultimately aborted biopic of the leader of the Haitian Revolution, with Paul Robeson in the lead role. Robeson would eventually play Louverture on the London stage in 1936, in C.L.R. James’s play of the Revolution that would lead, two years later, to the publication of his monumental history, The Black Jacobins.

Although a number of histories of the Haitian Revolution have appeared in recent years – most notably Laurent Dubois’s excellent Avengers of the New World (2004), James’s history continues to be one of the main English-language sources on Toussaint Louverture and the historical struggle that he led. (The Black Jacobins has also been widely translated, and a new edition, with an introduction by James Walvin, appeared with Penguin in 2001). James’s work combines archive-based research with literary flourish to provide an account of the Revolution through the lens of Marxist historiography. Although in later life he speculated on how he might rewrite the book, not least emphasising a history ‘from below’, The Black Jacobins provides a rounded account of Toussaint Louverture, avoiding the hagiography of many previous biographical accounts, emphasising the many ways in which he was ‘made’ by the historical circumstances in which he found himself, and foregrounding the gains of the revolution he led, particularly in terms of emancipation from the brutal system of plantation slavery by which Saint-Domingue was previously regulated.

In The Black Napoleon, a life of Louverture written several years before James’s version, Percy Waxman noted: ‘so much that is purely legendary has been written about Toussaint Louverture and so little trustworthy “source material” exists that it is extremely difficult for one with no gift for fiction to attempt a complete story of his life.’ In the nearly eighty years since the publication of the first edition of The Black Jacobins, numerous novels and biographies of the Haitian revolutionary have appeared, with among of the most noteworthy being works by Aimé Césaire (1960), Pierre Pluchon (1989) and Madison Smartt Bell (2007). Whilst Danny Glover has planned an as yet unrealised film of Louverture’s life, a French TV film was produced in 2012 by Philippe Niang, and a number of graphic novels have also appeared, including most recently the Guyanese writer and illustrator Barrington Braithwaite’s Drums of Freedom: The Saga of the Haitian Revolution (2015).

Two centuries after his death, the representational field around Louverture remains fraught, reflecting the need – described by the Martinican intellectual Edouard Glissant in Caribbean Discourse – to ‘argue around Toussaint’. More visible in an international context than his fellow revolutionaries Henri Christophe and Jean-Jacques Dessalines, Louverture has long served as a vehicle for the contested meanings of the Haitian Revolution. In one of the most useful anthologies of the extensive catalogue of posthumous re-figurings of Louverture, George Tyson states: ‘he has been all things to all men, from bloodthirsty black savage to “the greatest black man in history”.’ For creative writers, this translatability verging on malleability can be seen as liberating. Madison Smartt Bell, recent author also of a brilliant literary trilogy on the Haitian Revolution that is essential reading for anyone interested in the period, celebrates the licence this permits: ‘In the case of Toussaint, a certain paucity of biographical detail seemed an advantage, allowing the writer room to manoeuvre – to fictionalise a character who would not be false to the facts. That most of the existing readings of Toussaint’s personality contradict each other in very broad terms also struck me as liberating.’ In the field of historiography, however, the availability of Louverture for conscription to a range of ideological positions has led to his recent deployment in the context of what the late Chris Bayly described in 2010 as ‘the “conservative turn” in the global history of the revolutionary age’. Such a tendency was prefigured in the work of Pierre Pluchon, whose biography of Louverture – published, significantly, in 1989, the year of the bicentenary of the French revolution –  sought to domesticate the revolutionary implications of his subject’s life and present him primarily as an ancien régime figure. More recent evidence of such an approach is found in the work of Philippe Girard, whose Toussaint Louverture: A Revolutionary Life (2016) was marketed as ‘the definitive biography of one of the most influential men of the modern era’. Drawing on rich archival sources, Girard provides a well-documented overview of Louverture’s early years, but seeks to undermine his subject’s reputation as a black nationalist and fighter for universal emancipation by claiming that he was instead a ‘pragmatist’, a ‘social climber’ and a ‘self-made man’. Girard’s Louverture emerges primarily as a would-be member of the bourgeois capitalist class, a reductive take that denies the extent to which the revolutionary leader repeatedly risked his life in the vanguard of a black army of the formerly enslaved fighting under the banner of ‘Liberty or death’ against the French, British and Spanish, struggling against colonial slavery and an imperialist system of white supremacy.

Whilst acknowledging the biographical and historical uncertainties that persist in any attempt to write Louverture’s life (and mean that no biography of him will ever prove ‘definitive’), the aim of the recent ‘revolutionary life’ of Toussaint Louverture published by Pluto has been twofold: not only to challenge versions of our subject that seek to reduce him to the assumptions and values of the present age of late capitalism (a recent TED-talk by Ben Horowitz sought, for instance, to conscript Louverture to the cause of venture capitalism by claiming his transformation of an enslaved population of men and women into a revolutionary army was a case of ‘changing the culture’), but also to recover and restate the incendiary political implications of his life, actions and revolutionary thought. Toussaint Louverture: A Black Jacobin in the Age of Revolutions is openly situated in the tradition of radical historical scholarship of the Haitian Revolution, and seeks todefend the intellectual and theoretical ground which C.L.R. James – and those scholars who have followed in James’s wake, such as Carolyn Fick and Laurent Dubois – have worked so hard to foreground in the field of Haitian Revolutionary studies.

Charles Forsdick is James Barrow Professor of French, University of Liverpool. He is author of Victor Segalen and the Aesthetics of Diversity and Travel in Twentieth-Century French and Francophone Cultures (Oxford University Press 2001 & 2005) and co-editor of The Black Jacobins Reader (Duke University Press, 2016).

Toussaint Louverture: A Black Jacobin in the Age of Revolutions by Charles Forsdick and Christian Høgsbjerg is available from Pluto Press.