by Sarah Irving
BUY THE BOOK

From hijacking planes, to her involvement in radical sects, Leila Khaled’s activism for the Palestinian cause made her as era-defining as Che Guevara. Sarah Irving, author of Leila Khaled: Icon of Palestinian Liberation, sketches a biography of Khaled’s remarkable life as a female activist in a man’s movement.

When Leila Khaled hijacked her first plane, the Popular Front for the Liberation of Palestine was a left-wing organization with international links and the declared intention of winning the return of the Palestinian people to the lands they had left only 20 years before. This was the era of Che Guevara, killed in Bolivia just two years earlier, and of liberation struggles in South East Asia. The right of oppressed peoples to resist by armed means was discussed worldwide, and the heroes of these movements decorated the walls of student bedrooms and left-wing homes. The second wave of feminism was also breaking, adding another aspect to the environment in which news of this young female hijacker would be received.

In Leila’s Middle East home, Israel had just defeated the combined armies of Egypt, Jordan, and Syria in the Six Day War, humiliating the Arab world militarily and capturing the remaining Palestinian territories west of the River Jordan and north of the Sinai. Palestinians in the West Bank and Gaza, including thousands of refugees from the initial establishment of the State of Israel in 1948, had been living under Jordanian and Egyptian rule, but were now subject to Israeli military occupation. Despite this, the world’s attention to the Palestinians themselves was minimal. They were seen by the West as a small, dispossessed refugee people, caught up in the hostility between Jews and Arabs in the Middle East, and of little importance except as an excuse for aggression by Arab powers. Amongst the Palestinians of the refugee camps of Jordan, Lebanon, and Syria, discontent had been brewing. A resistance movement, which had been growing since the mid 1960s, had been further radicalized and popularized by the Six Day War and by Palestinians’ increasing suspicion of the hollow support voiced by Arab regimes. As Rosemary Sayigh, who lived in Lebanon throughout the 1970s, puts it:

It is difficult to separate out the Palestinian Resistance Movement (PRM) from the historical moment and mood in which it first arose, soon after the Six Day War, like a phoenix out of ashes, galvanising a whole nation humiliated by the collapse of the Arab armies. In this first glamorous début, the Resistance reaped a harvest of hero-worship from a wide spectrum of Arab public opinion, salon nationalists going so far as to call the fedayeen “angels” and “saviours.” This kind of support soon showed its shallowness, but for a time it put pressure on the Arab regimes to give the PRM official backing … by setting itself squarely in the framework of Third World struggle against US economic and political domination, the PRM revitalised radical elements in the Arab world and exposed the real character of the [reactionary Arab] regimes.

If the 1969 hijacking had made Leila Khaled famous for a few weeks, the audacity and scale of her 1970 enterprise extended her notoriety to new heights. The deliberate explosion of the four hijacked planes which had reached Dawson’s Field in Jordan, the confrontation between the Palestinian resistance and the Jordanian army, which almost tipped the country into civil war, and the involvement of Syria, Israel, the USSR, and the USA, brought the world to a state of extreme tension. For the Palestinian people, the events heralded greater repression in Jordan and the expulsion of militants to Lebanon, and, after further conflict there, on to Tunis and the wider diaspora.

For Khaled, the events of 1970 meant that her image joined that of Che Guevara on thousands of left-wing walls, and to many she became the archetype of the female revolutionary and the Palestinian woman. This notoriety was to have significant consequences for her, and for the way she and her cause have been regarded. Leila’s actions are still remembered precisely because they were so extraordinary. But because they have caught memories and imaginations, they have come to represent elements of Palestinian and left-wing identity far beyond themselves. Leila Khaled’s actions have impacted on the way that Palestinians as a people have been viewed by the world for the past 35 years, and have ensured that she looms large in discussions of women, the Middle East, and the tactics of liberation struggles.

As feminist writer Robin Morgan states, in the eyes of many in the West, “there are two well-fostered stereotypes of the Palestinian woman: she is a grenade-laden Leila Khaled or she is an illiterate refugee willingly producing sons for the revolution.”2 This generalization may say more about Western perceptions than Palestinian reality, but it does illustrate the extent to which Leila Khaled joined a small pantheon of individuals who, along with Yasser Arafat and assorted suicide bombers, spring to the minds of many Westerners when Palestine is mentioned. This is a distinctly ambivalent thing, for Leila and for her people. It means that even before they became associated with suicide bombing as an instrument of struggle, Palestinians were irrevocably linked with terrorism.

Some, including Leila Khaled, insist on the Palestinians’ right to defend themselves through armed struggle. Others—including those sympathetic to the broad Palestinian cause—see the use of high-profile violence as playing straight into Israeli hands, and as obscuring the grind (and often non-violent resistance) of the day-to-day survival of those Palestinians living under occupation or in the poverty and discrimination of the refugee camps. Does Leila’s high profile turn the Palestinian struggle into something glamorous, full of clandestine meetings and international plots? Or does it obscure the everyday resistance of ordinary people, like the tax refusal with which the townspeople of Beit Sahour in the West Bank defied the Israeli occupation? On internet sites, grotesque male bloggers celebrate Leila as the “ultimate badass feminist revolutionary chick with a gun,” objectifying Leila and her comrades while revelling in their own radicalism.

For some feminists and activists, Leila’s role as a high-profile woman who has been so prominent in the “man’s world” of armed political struggle has made her a thrilling, inspiring figure. Some women, especially black feminists, identify her along with figures such as Black Panther Assata Shakur as a woman “living” their resistance in parallel with those working in the domains of theory and discussion. Professor Eileen Kuttab of the West Bank’s Birzeit University described fighters such as Leila as having “tied the national liberation struggle to their struggle for social liberation,” and as having won a position for women that meant that when the First Intifada started in the later 1980s, women were seen as equal partners in the struggle.

For others, however, her adoption of “male” methods of violence, and her history of work within male-dominated organizations has illustrated that, like Margaret Thatcher or Condoleezza Rice, she has put her fellow women second and “sold out” to patriarchal interests. Robin Morgan’s work on gender and violence, The Demon Lover, roundly criticizes Leila for obeying a macho ethos of terrorism and betraying the needs of Palestinian women. According to Morgan, Leila Khaled “has not survived being female. [E]ven for the unattached woman, the gestures of obeisance [to male authority], the protestations of denial, must be made. The woman who rebels via the male mode can do so only to the point where her own rebellion might begin.”A mural of former PLO militant Leila Khaled

Morgan notes that when she carried out the hijackings, Leila “was young, she looked like Audrey Hepburn, and she was the first ‘female terrorist’ to hit the news in mid-action; the press had a field day.” In acknowledging the press images and stereotypes of Leila, though, Morgan never seems to note that her own response to Leila, and those of many other Western academics and commentators, is based on those stereotypes. Are the “obeisances” which Morgan condemns a recognition of the constraints placed on women wanting a public role in Arab society? Khaled complains of this very fact in her autobiography, which Morgan ignores. Despite the flaws in Morgan’s reasoning, her view is not unusual, and there are many in the women’s and peace movements who see figures such as Leila and Che as working within the frameworks of the oppression they seek to overcome.

Nevertheless, to many Leila Khaled is still a figure of admiration, fascination, and inspiration. In the world of reality TV, X Factor, and American Idol, this presents a certain challenge. How to celebrate the charismatic and extraordinary individual whilst avoiding the cult of celebrity, and emphasizing the context that makes political “heroes” what they are? And in a world of horrific violence, where civilians are increasingly on the receiving end of conflict and struggle, it’s a fine line to tread acknowledging courage and commitment to a political cause without glorifying and glamourizing tactics used out of necessity and desperation.

Is it politically acceptable to focus on individual “heroes”? I think it is, in the sense that there are individuals whose lives and examples might have things—good or bad—to teach us about personal paths through political struggle. And I think it is acceptable for individuals engaged in political activity to be inspired by well-known (or more obscure) figures, as long as they also acknowledge that these are not saints or gods but people of their specific time and place. This book, and the series of which it is one of the first, will seek to tread that fine line.

Sarah Irving is a freelance writer whose work has appeared in Electronic Intifada, Guardian and New Internationalist. She has held editorial roles at Red Pepper and Peace News. She is author of Leila Khaled: Icon of Palestinian Liberation, available from Pluto Press. 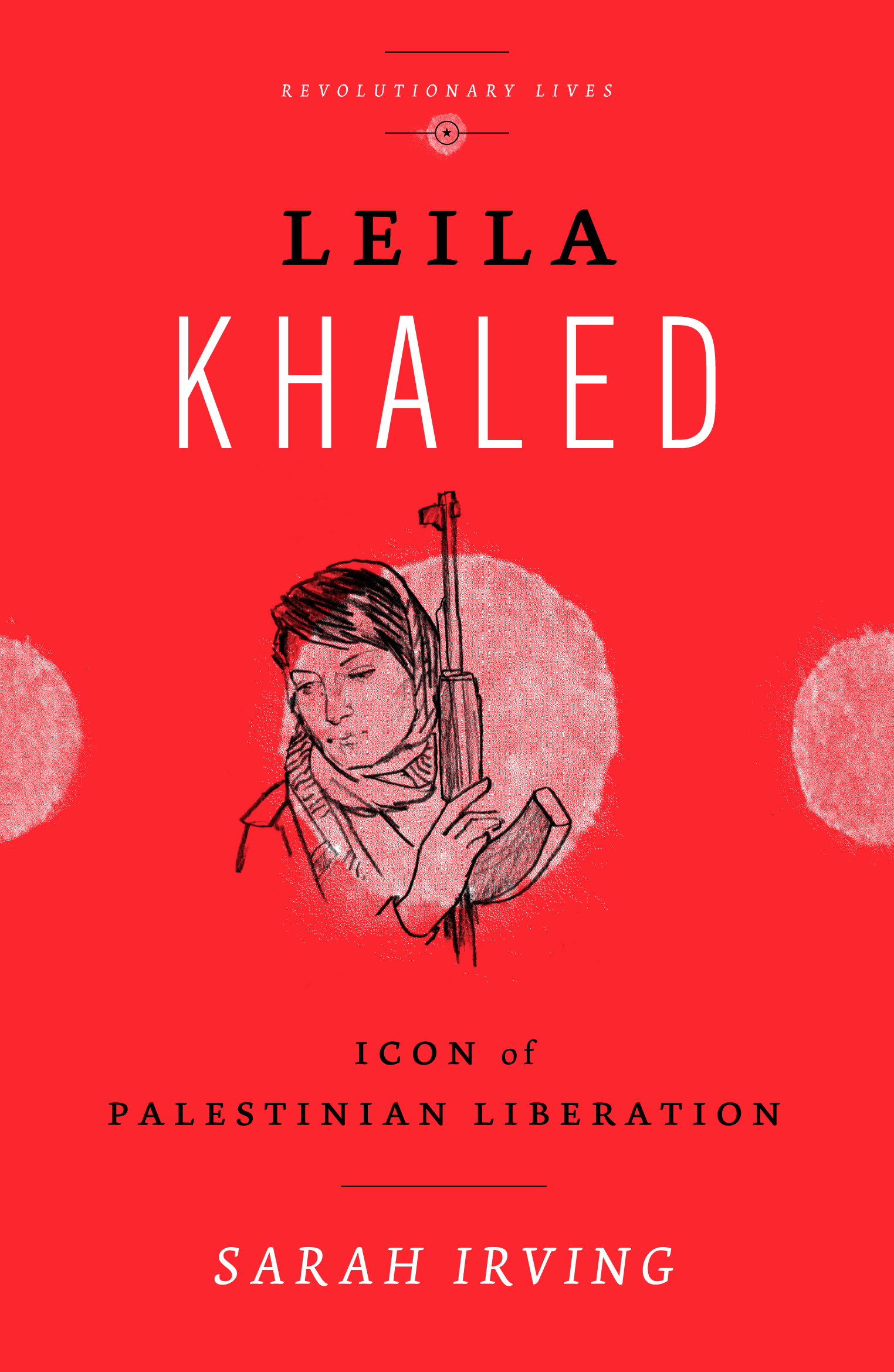