Losing Control:
Why everything went wrong in Afghanistan

by Paul Rogers
BUY THE BOOK

It has been 20 years since the 9/11 attacks and today the West is finally retreating from Afghanistan, leaving its people in the hands of the Taliban, a force that never went away. In this extract from the new edition of Losing Control: Global Security in the Twenty-first Century Paul Rogers looks at the war in Afghanistan to understand why things went so horribly wrong, and asks whether it really had to be this way.

I will discuss here the the war in Afghanistan which, at the time of writing continues. It started in October 2001 with the aim of terminating the Taliban regime that had hosted the al-Qaida movement responsible for 9/11. It appeared to succeed within three months, but the Taliban movement was never fully defeated and came back within two years. By 2006 it was spreading rapidly across rural Afghanistan, and by 2011 it was tying down 100,000 US ground troops, 30,000 more from other coalition partners and a sizeable air force.

Previously, by the end of the summer in 2001, eight months into the new Bush administration, there was considerable satisfaction in neoconservative circles that the United States was starting to fulfil its potential as the true world leader and that the vision of a global New American Century would be made real.

Then, just before 9 a.m. on 11 September 2001, four large passenger aircraft were hijacked after taking off on internal flights from airports in the eastern United States. Two of the planes were flown into the twin towers of the New York World Trade Center, one crashed into the headquarters of the US Department of Defence, the Pentagon building in Washington, and a fourth crashed in open country, after a struggle between some of the passengers and the hijackers.

While this had its impact on the US military, and also demonstrated the innate vulnerability of federal buildings in Washington, it was overshadowed by the sheer destruction in New York, the impact of which was to have a profound effect on American perceptions of their own security. This, in turn, was to lend exceptionally strong support to the Bush administration in its chosen response to the atrocities.

The Twin Towers before the attack on 9/11. Photo credit History in HD.

Across much of the world, the immediate response to the atrocities of 11 September was of strong sympathy for the United States. The full impact of the attacks caused considerable shock, not least because the twin towers were widely recognisable across the world.

Within days, there was an appreciation among a few analysts, mostly in Europe and the Global South, that one effect of the attacks might be to encourage the United States to be highly cooperative in its response.

In the event, the US response to 11 September was far more unilateral. A number of states cooperated in the war in Afghanistan, but they were surprisingly few in number and there was no doubt whatsoever that this was not a broad-based coalition of partners but a substantial military operation organised and commanded by the United States.

The first phase of the war in Afghanistan lasted three months and resulted in the destruction of the Taliban regime and the dispersal of al-Qaida operatives then present in the country. There was an initial supposition that the United States would put substantial ground forces into the country, but the military tactics used took a very different route with three components. The first was the use of special forces to undertake reconnaissance and to identify targets for bombing, and the second was the use of a range of strike aircraft, especially strategic bombers, to destroy Taliban facilities and militia.

The third element, and the key to the whole war, was the use of anti-Taliban forces, especially the Northern Alliance warlords, as ground troops to evict Taliban militia from all of their centres of power. In essence, this meant that the United States took sides in a long-running civil war, supporting a range of groups that themselves had had an appalling human rights record before the Taliban had progressively taken power in the mid- and late 1990s. In the process, large quantities of arms were provided to anti-Taliban forces, most of them coming from Russia although it appears that these transactions were largely financed by the United States.

Such a withdrawal was undertaken most remarkably from Kabul itself, where an overnight retreat was accomplished with hardly any casualties, but there were similar processes in many other parts of the country. One obvious result was that the Taliban regime lost control of Afghanistan, and an interim administration was established in Kabul by the end of the year. But the longer-term implications were much less clear. The public perception was of a war won with minimal casualties for the United States, but a significant US military view was that a much longer-term if lower-level confrontation in Afghanistan was likely. This was due to the recognition that the Taliban militia had not been defeated but had wisely chosen not to fight on terms massively favourable to the Northern Alliance and to US air power.

This view was supported by two other factors. One was that it proved exceptionally difficult to take into custody senior commanders of the Taliban and al-Qaida, including the leadership of both organisations. The second was a prevailing view that much of the al-Qaida organisation moved from Afghanistan into Pakistan during the course of the conflict.

By the end of 2001, most of the al-Qaida centres and almost all of the concentrations of Taliban military power had been dispersed or destroyed, but the manner in which this happened had implications for the future. In a number of isolated cases there was severe ground fighting between Northern Alliance and other forces, on the one hand, and Taliban and al-Qaida militia on the other. But in the great majority of the cases, the Taliban and al-Qaida did not engage in fighting at all, preferring to withdraw, usually with their weapons intact, and to melt away into their home areas or communities in which they could rely on support, including those in Pakistan.

There was another aspect of the 11 September attacks and the US response that should have been recognised at the time. The destruction of the World Trade Center and the attack on the Pentagon were carefully planned operations, conceived and implemented over a long period of time. Furthermore, they formed part of a long-term strategy, probably developed in concert with other paramilitary coalitions in South-West Asia.

It should therefore be assumed that those ultimately responsible for 11 September had planned those attacks as part of a strategy that would expect a very strong US counter-reaction, especially from the new Bush administration,  that the US intervention and the war in Afghanistan was not only anticipated but was part of the strategy itself. From the point of view of an al-Qaida strategy measured in decades rather than years, a strong and sustained US military offensive, including the substantial build-up of US forces in the region, would be exactly what was required to further encourage and enhance the developing anti-US mood. This would ensure long-term support for al-Qaida and other networks opposed to the presence of the United States in the Gulf, as well as its ongoing support for Israel.

In the United States there was, at first, overwhelming support for the ‘war on terror’. In Europe, sympathy over the attacks remained, but the support for the war in Afghanistan, even in the early months, was much more mixed, with a widespread concern that it might ultimately lead to more tensions and violence. In much of the Middle East and South-West Asia there was considerable opposition to the war in Afghanistan.

As to the rest of the world – in particular the ‘majority world’ of three-quarters of the global population, there was a persistent and deep-seated thread of opinion that saw the US response to 11 September as part of a continuum of action over some decades. One analysis, published soon after the attacks on New York and Washington, condemned them as horrific, despicable and unpardonable, but cautioned against an automatic ‘iron fist’ response that ignores the underlying context. It pointed to the frequent use of indiscriminate force by the United States, and to the bitter mood throughout much of the Middle East and South-West Asia, directed partly at the United States because of its perceived dominance of the region but also against autocratic states dependent on continuing US support. The analysis concluded:

The only response that will really contribute to global security and peace is for Washington to address not the symptoms but the roots of terrorism. It is for the United States to re-examine and substantially change its policies in the Middle East and the Third World, supporting for a change in arrangements that will not stand in the way of the achievement of equity, justice and genuine national sovereignty for currently marginalized peoples. Any other way leads to endless war.[i]

In the final analysis, it is a matter of choice, and the next decade proved pivotal in determining the degree of international instability that could prevail for much of the new century. The early effects of 11 September suggested a hardening of the old paradigm, but there is every chance that it may become possible to further analyse and demonstrate the futility of that approach. The responsibility for those in a position to do so, whether activists, academics, politicians or many others, is considerable.

[i]  Walden Bello, Endless War?, Focus on the Global South, Manila, September 2001. This, and other analyses, is available at: www.focusweb.org.

Paul Rogers is Emeritus Professor of Peace Studies at Bradford University and International Security Advisor to Open Democracy. His book Losing Control: Global Security in the Twenty-first Century is out now, in its 4th edition. 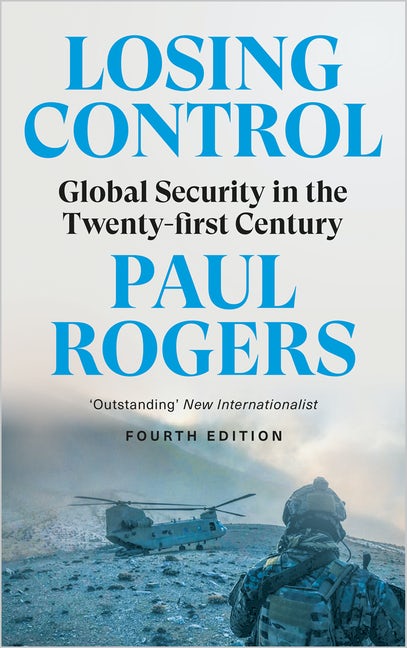