Why we need Marxist-Humanism now

by Robert Spencer
BUY THE BOOK

Today, anti-humanism is a dominant, even definitive, feature of contemporary theory, whereas humanism is dismissed as ‘bourgeois’ and ‘old-fashioned’, even a precept of Right-Libertarianism. For Humanism demands a reappraisal of humanist 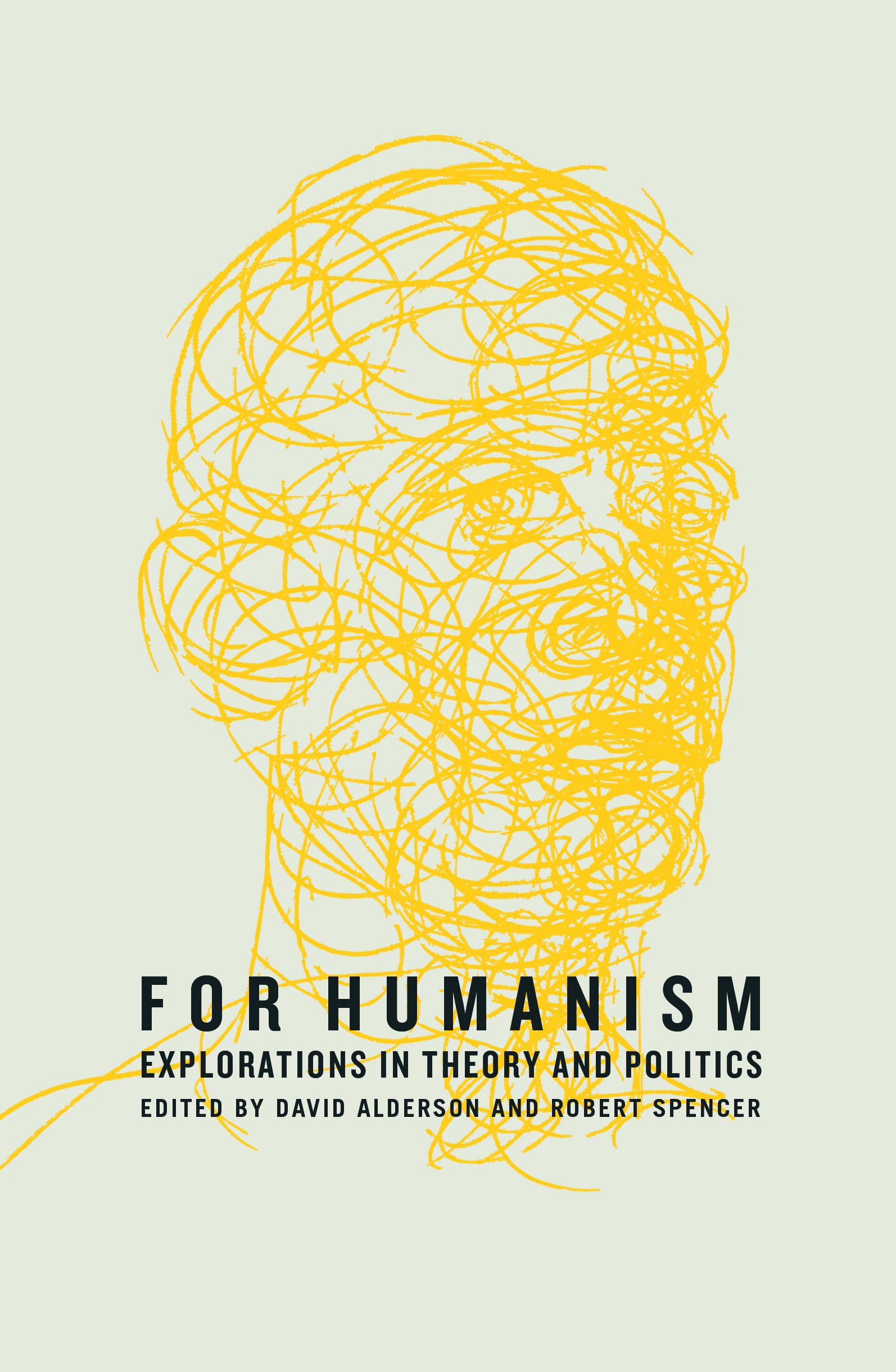 Whilst narrativising his humanist awakening,  editor and contributor, Robert Spencer, encapsulates the aims of For Humanism. He defends humanism against its outright rejection by certain strands of anti-foundationalist thought (namely postcolonialism and queer theory), and, in rebuking anti-humanism’s chief proponents, Foucault and Heidegger, proposes a humanist methodology of resistance, whilst demonstrating that Marxist-Humanism has a place in humanist thought.

When I first went to university to study English Literature I was interested to discover that words didn’t always mean what I thought they meant. It was a useful lesson, not least because among the many benefits of a literary education is the realisation that language, the main means by which humans encounter, experience and shape their world, is changeable as well as contestable. There are struggles taking place all the time over the meanings and uses of words. There were words that I liked that I learned to be suspicious of. In conversations with Marxists, I learned that it was not a good thing to be an ‘idealist’, the word did not mean what it appeared to mean to the eighteen-year old me. As I discovered that struggles over social, economic and political power played an equally prominent part in human history as the battle of ideas did, I realised that an idealist, was somebody who exaggerated the latter and downplayed the former. I was happy to accept that claim and I still am. However, I had much greater difficulty when one of my seminar tutors responded to a comment I made in class about David Copperfield with the disapproving remark that “that, Rob, was a very humanist thing to say”.

Puzzled by her disapproval, my interest in humanism began. This ongoing struggle over humanism’s meanings resulted in For Humanism, the book that my friend David Alderson and I have put together. To be a humanist or, still worse, a liberal humanist was evidently a bad thing; the belief in the distinctive value of the human individual was irretrievably bourgeois, akin to the Right’s belief in the inviolable private self. Now I had little truck with this objection. Anybody who has spent time in the company of Trotskyists will have seen the force of Oscar Wilde’s famous remark that the problem of socialism is that it takes up too many evenings, and for me the point of socialism was not to sacrifice the self to the collective but to fashion a society in which everybody had the time and the resources required to do their own thing. Collective struggle was required in the short term, granted, but only in order to make collective struggle unnecessary in the long term.

To be fair to the folk in SWSS, a few of them, it seemed, were quite happy to describe themselves as humanist, thus I was introduced to a bone of contention on the Left that has interested me ever since. I wanted to know how to be a Marxist and a humanist. The anti-humanist Marxists thought that humanism was bourgeois. Humanists preferred privacy to the collective, the individual to the working class, beauty to struggle, and so on. Anti-humanist Marxists distrusted humanism because it extolled the whole rights-based ideology of capitalism and therefore had a whiff of revisionism and political compromise about it. The Marxists I hung about with saw themselves as revolutionaries not as conciliators or coalitionists; one of them confessed to me that he had suspicions about a comrade who, he suspected, would have moral reservations about stringing somebody up from a lamppost! Not a predicament – I reflected to myself in a pub just off Norwich’s Dereham Road – any of us were likely to face any time soon.

Lenin notoriously told Maxim Gorky that he daren’t listen to Beethoven’s Appassionata too often because it ‘makes you want to say stupid nice things and stroke the heads of people who could create such beauty… And now you mustn’t stroke anyone’s head – you might get your hand bitten off. You have to hit them on the head, without mercy.’ I haven’t hit anybody on the head since I was about ten years old, and I’ve always had a suspicion about insurrectionary rhetoric of this kind. For me, the socialist revolution should not, in societies like ours at least, be an insurrection, but the concerted entrenchment and expansion of forms of democratic empowerment that will confront and supplant the overweening regime of capital and authoritarian state power. Let’s call that a ‘long revolution’, to borrow Raymond Williams’s term, provided that as much emphasis is placed on ‘revolution’ as on ‘long’, as Williams once added.

David Alderson and I, in For Humanism, wanted to remind readers of the value and strength of a specifically Marxist humanism that sees its’ social, political and economic goals as extensions and not blanket rejections of the liberal or bourgeois tradition of democracy, rights and freedoms. In other words, Marxism is a humanism. Granted, talk about democracy, rights and freedoms is usually employed as an ideological smokescreen to conceal the oppressions and exploitations of rapaciously capitalist dispensations such as ours. Most of us are free every five years or so to put a cross on a ballot paper, but the rest of the time our representatives take their orders from big business. Every human being on the planet has an inalienable right to things like a decent pension and free healthcare, but the International Covenant on Economic, Social and Cultural Rights is hardly worth the paper it’s written on. When these rights confront the right of capital to travel, suborn and exploit, force decides. But, as Adorno says somewhere, it’s not ideology that’s at fault here, but rather ideology’s pretension to correspond to reality. The ideals of freedom, democracy and rights are not wrong. What is wrong is the naïve liberal faith that they can be realized under present conditions.

We wanted to think about the reasons why anti-humanism had become such a dominant, even definitive, feature of cultural theory. What has made those who teach literary criticism and cultural theory grimace or recoil when they thought somebody was doing or saying something humanist? The answer is that they have relied on humanism’s enemies to tell them what the term means. The humanist tradition, with all its richness and complexity, its secularity, its commitment to democratic socialism, feminism and anti-imperialist struggle, its restlessly critical sensibility, its militant repudiation of every political and philosophical effort to define or control human beings, was simply written off on the basis of hatchet jobs done by dubious figures like Martin Heidegger and self-serving half-truths peddled by Michel Foucault.

In his lamentable ‘Letter on Humanism’ of 1947 Heidegger dismissed the human as just the latest impertinent effort to harass or constrain ‘Being’, the mystical invocation of ‘Being’ leading Heidegger’s work variously to Zennish otherworldliness, reactionary anti-modernism or the blood-and-soil mysticism of German fascism. Foucault, who was politically a very changeable figure, dismissed humanism as an antiquated and reactionary faith in the inviolable human subject. Humanism’s most influential post-war exponent, Jean-Paul Sartre, was described by Foucault as ‘a man of the nineteenth century trying to think through the problems of the twentieth century’. Foucault was similarly dismissive (and wrong) about Herbert Marcuse’. Undeterred by the fact that none of Sartre’s work makes any such claim about human subjectivity being static or exceptional or normative (indeed, it painstakingly makes the opposite claim), Foucault and his epigones presented all humanism as a sterile faith in the normative nature of subjectivity.

It’s my view that Foucault’s critique of humanism has been most influential and most damaging. For cultural theorists inspired by Foucault’s work, which is a large proportion of those working in the sub-disciplines of postcolonial theory, queer theory, feminism, ‘the human’ is just another reprehensible norm to be queered and subverted. For postcolonialists, for example, ‘the human’ is synonymous with European colonial power and its legacies. The aim of postcolonial criticism is then to ‘resist’ that power and to show how texts ‘hybridise’ the normative identities of nation, empire, sexuality, race, subjectivity and so on. The problem with this way of proceeding is that cultural theory and cultural criticism are thus locked into a repetitive pas-de-deux, the power of the human or of race becoming a formative principle that we are called upon to resist but not finally to overthrow. ‘Wherever there is power there is resistance’, says Foucault, which sounds comforting enough until one realizes that this little maxim works the other way too: where there is resistance there is power and always will be. It has always struck me that the notion of hybridizing identity or subverting the normal isn’t analogous with the purpose of the radical project: to become the dominant in its own right, take power and seek the political, cultural and institutional change that would make it impossible for prescriptive identities and norms to be imposed. The ubiquitous Foucauldian rhetoric of resistance is too imprecise. It says nothing about strategy and goals. It connotes the fending off of an adversary not the triumph over that adversary. Anti-humanism rose to prominence in the era of the ‘class war conservatism’ of neoliberalism. It represents a parasitic dependency on a system of ‘power’ that it despairs of being overturned. Anti-humanism is a pragmatic adjustment to a period of history that saw the organized forgetting of the revolutionary horizons of the Marxist or socialist humanism that we wish to rehabilitate.

So the purpose of our book was to show that the Marxist humanist tradition shows a way out of these dead ends. Humanism names a principle, the rights and capacities of human beings, that is being suppressed by systems of power and in the name of which transformative (rather than merely local or defensive) political projects might be launched. Humanism’s detractors have misrepresented it. It does indeed identify specifically human attributes and needs: for shelter, nourishment and any number of other physical provisions and for creative self-expression. But it does not identify the human as a ‘kingdom of values’, to use Sartre’s phrase, separate from or superior to the animal world and to nature. It does not impugn but esteems diversity, the infinitely varied creative capacities of human communities and individuals. It rejects the self-defeating notion that some sort of ‘will to power’ is an inviolable element of our political life. Its political principles are anchored in the vision of a society that conforms more exactly to the kind of beings that humans unalterably are: multifarious, creative, somatic creatures that feel pain and seek pleasure, dependent mammals capable of transforming that fact of mutual dependency into the value of solidarity. For Humanism ransacks the resources of a half-forgotten tradition. But it has no sterile reverence for the past, for bourgeois or colonial or patriarchal humanisms. Nor is it satisfied with cultural theory’s pragmatic rapprochement with the neoliberal present. It seeks a radically different kind of future. The plutocrats, mobsters and little Hitlers don’t scare us. We’re not here to ‘resist’ them, to organise in the margins or absorb power’s blows. We know what we’re fighting for.

Robert Spencer is Senior Lecturer in Postcolonial Literatures and Cultures at the University of Manchester. He writes and teaches in the areas of modernism, cultural theory and postcolonial writing.

For Humanism: Explorations in Theory and Politics edited by David Alderson and Robert Spencer is available from Pluto Press.