by Adam Mayer
BUY THE BOOK

Adam Mayer, author of Naija Marxisms, writes on on the importance of recognising and engaging with the rich history of Marxist scholars in Nigeria.

As I write this entry, the Nigeria Labour Congress (NLC) just backtracked on a planned general strike 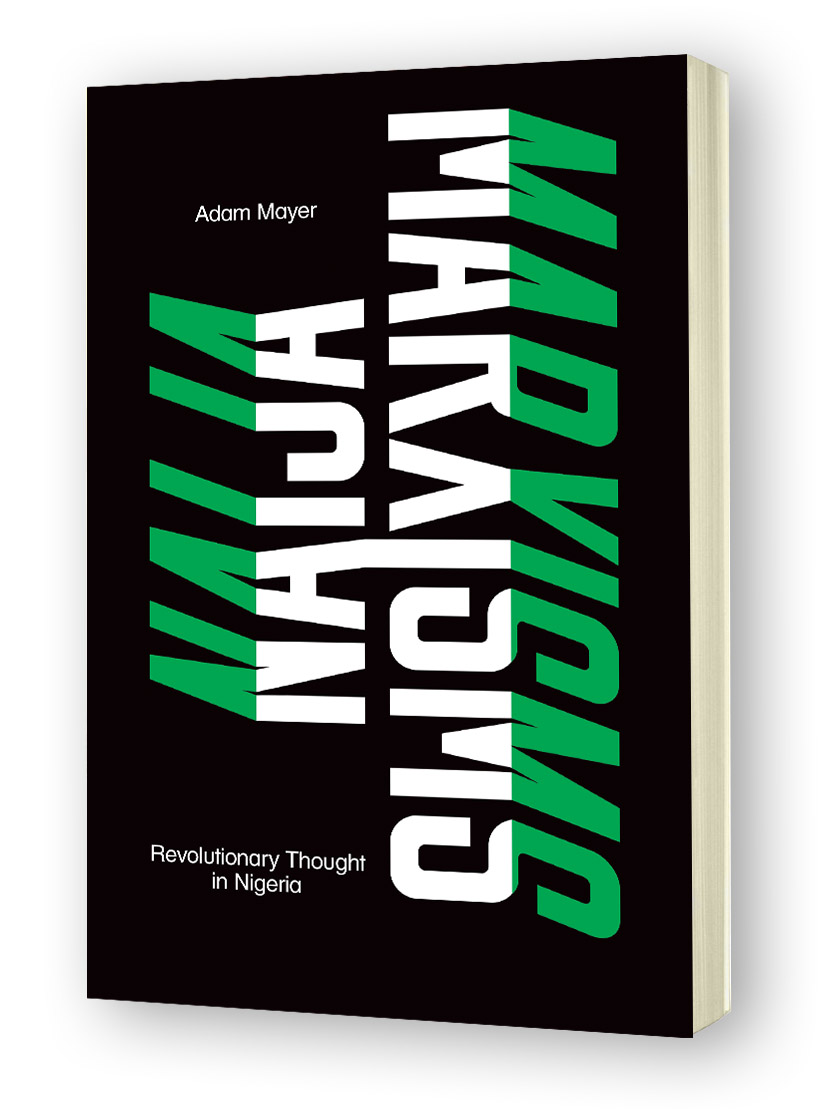 against the removal of the fuel subsidy. For readers from Northern national economies, the importance of the fuel subsidy – which allowed for consumer fuel prices to be kept at around N100 [$0.50] – N50 [$0.25] less than the market rate – perhaps seems an unusual reason to call for a general strike in the first place. Nonetheless, if carried through with, this would have been the third such general strike (after 2003 and 2012) that centred on the removal of this vital government subsidy – with a long list of minor strikes before, after and in between. What is crucial is the fact that the national minimum wage is around $90/month, and 70% of people are not in formal employment and thus not eligible even for that sum. Primary school teachers – in formal employment – or wheelbarrow men and market women – not in formal employment – all need to commute to their workplaces – and their commute is never covered by an employer. Thus the removal of the fuel subsidy will increase an average worker’s cost of living by around 25-30% with no real compensation beyond promises — a major drawback! Factional struggles nipped this nationwide strike in the bud – nonetheless the NLC is very far from a spent force.

The NLC’s labour organisers draw on a rich and multifaceted tradition when they call for strikes. Neoliberal charlatans, media pundits and government officials may tell the Nigerian lorry driver, and the unemployed women and men in his compound that the removal of the fuel subsidy will allow for a reallocation of ‘precious government resources to worthy causes’ such as schools, hospitals, nurseries and water towers, it is improbable that they would buy into this hegemonic babble. President Buhari, a man famous for his personal disdain for embezzlement, is at the same time also the man left in charge of a neo-colonial political economy. His credentials in fighting Maitatsine – as Mohammed Marwa was known, Marwa was a radical Islamic preacher, who attracted considerable support in the 1970s – as military head of government in the early 1980s, or Boko Haram as president since 2015 do not make him a progressive. Muhammadu Buhai was elected in 2015, promising to fight endemic corruption and the advances of Boko Haram.

The reason why the NLC can (most of the time) stand up to incredible pressures by the forces of hegemony are manifold – but I am convinced that they include the works of the icons of Nigerian Marxist thought that the NLC is heir to.

Foremost Nigeria expert John Campbell, in the very last words of his famous Nigeria on the Brink visualises the appearance of a Fidel Castro in Nigeria. He does not elaborate on this, and provides no groundwork for the reader on radical left wing forces in the country. Naija  – local speak for Nigerian – Marxists may be forgotten in the West, but are not forgotten by feminists, labour organisers, and democratic human rights activists in the country.  When I first encountered the theoretical works that were written by Nigerian Marxists, I was immediately taken by their sophistication, wit, and complexity. So struck I wrote a book on them as there was no reference material, no reader, and only very few (and very academic) articles buried in 1980s peer reviewed journals – I thought this situation needed remedy. My book (researched at the American University in Nigeria from 2010 to 2013) put forth the thesis that in Nigeria, Marxist thought has since the 1940s developed to a very large degree. It grew out of, and helped to a great extent, the country’s labour movement, its feminist movement, its academic historiography, social thought, and political economy; and it has been the mainstay of party politics in the case of illegal Marxist party formations, legal anti-feudalist forces, and the NGO sector. Long gone are the days when Marxism meant imported pamphlets and a rootless foreign ideology: Nigeria has produced Marxist thinkers of importance in most fields of political and human inquiry, and Marxism has pollinated a noticeable segment of Nigerian fiction. I argue in my book that Naija Marxisms have been, and still are, the single most important alternative framework that Nigerians have used in their quest to make sense of the world that surrounds them. It is a dazzling antidote to hegemonic neo-liberal platitudes.

The best Nigerian author on neo-liberalism is a Gramscian thinker, Usman Tar – who is a ROAPE Contributing Editor and worked on the journal for a number of years – the Nigerian Guardian’s former columnist is a formidable Trotskyite author, Edwin Madunagu, Eskor Toyo focussed on Maoism’s take on land ownership – a very relevant inquiry in Nigeria where feudal land law is valid today. When it comes to feminism, class based approaches have informed even professedly non-Marxist strands of thought. Women writers such as Ifeoma Okoye are conscious Marxists (see her The Fourth World). Neither has all this been unrelated to the NLC. Hassan Sunmonu  – its former head – published together with Bade Onimode, the leading Nigerian political economist in the 1980s and Usman Tar, on the fate of the NLC in the 1990s, and the unions were the single strongest pro-democracy force under the dictator Sani Abacha.

I propose in my work that we stop ignoring this intellectual tradition and recognise it as more than esoteric politics and academic scribbling – it is all part and parcel of African philosophy, African political thought, African achievement in the social sciences, as well as a tool for organisers. The fact that many of Naija Marxism’s authors, even feminist socialists, did not disavow Lenin, will not change this. I am proposing a new way of looking at entire schools of thought and their value in Nigeria. Nigerian Marxist tomes have disappeared from public libraries in Nigeria and in the UK, even when they had been published by Zed or New Beacon Books in the 1980s. The new NGO paradigm, although fed to a large extent by former and actual Marxists, also diverted attention away from resistance, to charity, and while today’s radicals acknowledge even their Leninist predecessors, some are afraid of being labelled as – hard core – Marxists. My work, after brief introductions on Nigeria, traces the historical trajectories that leftist movements had gone through since the 1940s in the country. This is something that has not been done in similar detail. Then I go on to expose the international context of Nigerian Marxism, from South African Communists to the UK, the USSR and Ghana. In my core chapters, I examine the thoughts of Mokwugo Okoye, Ikenna Nzimiro, Eskor Toyo, Edwin Madunagu, Yusufu Bala Usman, Niyi Oniororo, Bade Onimode, Adebayo Olukoshi, Okwudiba Nnoli, the Nigerian circle of the Review of African Political Economy, Bene Madunagu, and Molara Ogundipe-Leslie. In my last and analytical chapter, I examine the question what unites these thinkers, and also deal with their theoretical and practical relevance on a broadly Lukacsian basis.

Following Usman, I argue that Marxist analyses have provided the single most relevant explanation for the appearance of radical Islam in the country, along with brilliant and succinct analyses of how Nigeria’s neo-colonial economy works. I argue that the most important enemy of radical emancipation has been the sector of foreign corporations – more powerful than the decrepit colonial state of the forties, or the inept and prebendal federal government of ‘flag independence’ even today. Even more importantly, on the basis of Nigerian Marxisms, I posit that corporate rule, religious – and sometimes relatively recent – patriarchy, criminal governance and feudalism have formed a package and that they have been, and still are, fought, with the help of ideologies that derived their most important impetus from Marxism.

While I admire the authors I discuss, I do not think that my work is akin to ‘The Lives of the Saints.’ Some of these authors have been more subtle than others – with especially Oniororo shocking the reader with blunt and surprising statements, but then again, he was rumoured to have studied in North Korea – and I think it is important to provide criticism, which sheds light on the strengths and weaknesses of their respective systems of thought. At the same time, I am convinced that all of them merit discussion (even Oniororo). Only Claude Ake has had a full monograph devoted to his oeuvre, others have been dealt with briefly in articles. While not a microanalysis of every one of their works, rather my own take aims to focus on their most relevant, most brilliant, and most entertaining opuses. All this in the honest hope that this serves those that it aims to serve most: the working men and women of Nigeria, and also their organisations and causes such as the fight for a living wage, the fight for a decent commute, proper meals, and a life that allows for growth, progress, and community – instead of the barbaric political economy of today.

Adam Mayer is Assistant Professor of International Relations at Webster University, Thailand. Formerly he served with international NGOs in Afghanistan, before teaching Politics at American University of Nigeria, Yola.