No Room for The Left:
Keir Starmer’s Society of Control

In the aftermath of the local election and the Labour losses in Hartlepool, Tallulah Belassie-Page investigates the Labour leader’s campaign surrounding ‘law and order’, and why it’s out of step with progressive and marginalised voters.

Marred from their inception by institutional racism and misogyny, the police have long been a polarising force. Among many, police presence can be both anxiety inducing and alienating. With recent protests against the draconian Police, Crime, Sentencing and Courts Bill, there has been a growing recognition of the harms created by police power within communities. The combined effort of resisting the Bill has seen an overwhelming coalition of groups united against an institution that has disproportionately targeted marginalised groups time and time again.

It seems ill-fated, then, that against this backdrop Labour committed to putting more police on the streets. On the 30th of March, in what felt like the final hours of an electoral campaign doomed for failure, Labour launched a new campaign strategy focusing on the need for better policing in Britain. “Under the Conservatives, criminals have never had it so good” reads a giant billboard, alongside the statistic that “violent crime is up 116% and the charging of suspects is down 26%”. A catchy slogan, yet for many this is evidence that Labour is woefully lagging behind the emerging discourse on police powers. 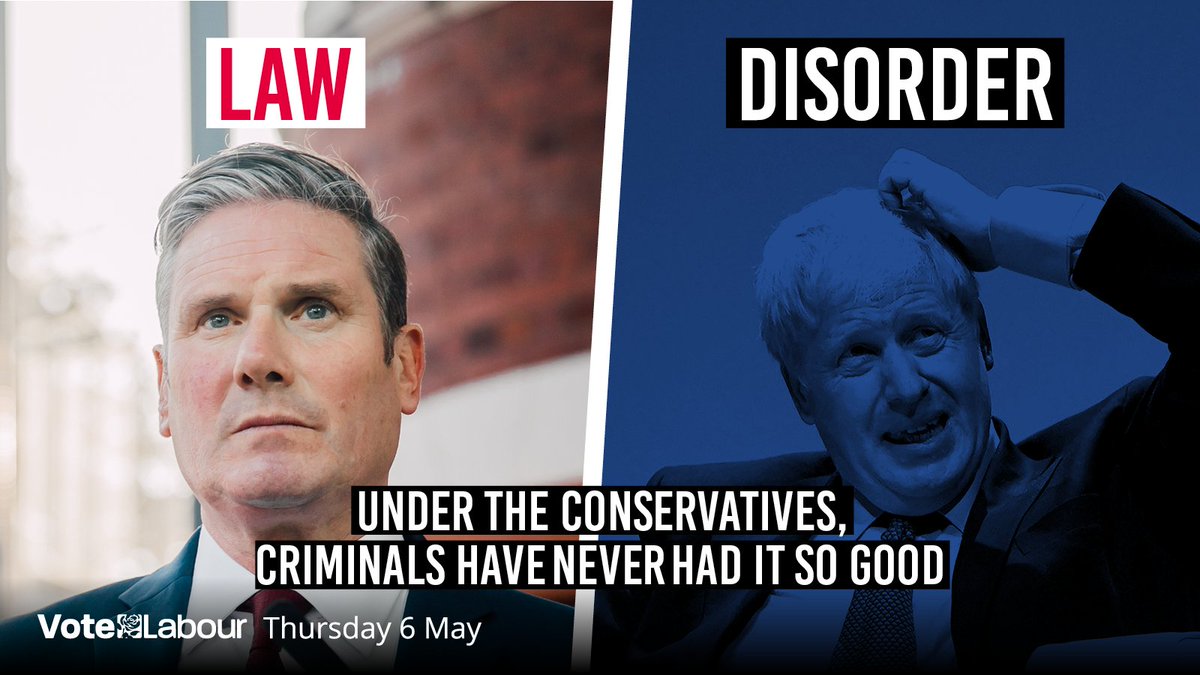 Labour’s press release calls for more police on the ground to focus on securing “safer streets and tackling violence”. These demands come as a necessary sequel to the sensationalist reports of knife crime within London that became the rallying cry of the Conservatives. Yet it is undeniable that crime is on the agenda for many. In the last general election, crime was voter’s third most important issue. Despite these fears, crime has been in long-term decline since the mid-1990s, continuing consistently on this downward trajectory each year. With total police recorded crime decreasing 8% in the last year, the question remains as to what crime this strategy aims to tackle.

The failure to secure Hartlepool has been a well-documented, microcosm of Britain’s disillusionment with the Labour Party. One tweet from Shadow Home Secretary, Nick Thomas-Symonds, reads “Conservative cuts to policing numbers have failed #Hartlepool”. Symonds insists that more should be done to tackle crime in Hartlepool, citing antisocial behaviour as a key factor in the town’s decline. In an article published by the Mirror, Labour quotes “loud parties, drug deals and burnt-out cars blighting communities” as forms of antisocial behaviour that need targeting across the nation.

Despite identifying violent crime in the campaign’s billboard, antisocial behaviour has taken centre stage in their political messaging, an indication that Labour is more concerned with generating public hysteria than safety. Whilst jumping in and out of national lockdowns may have had an amnesic effect on many of us, it was not so long ago that Tony Blair weaponised anti-social behaviour discourse against many traditional Labour voters. Alongside a post 9/11 drive towards surveillance, antisocial behaviour formed the backbone of Britain’s securitisation during the early 2000s.

With a history of being controlled through discriminatory punitive measures such as the anti-social behaviour order (ASBO), young black men are disproportionately prosecuted under antisocial behaviour laws. Labour’s latest politicisation of antisocial behaviour signals their continued appeal to scapegoating tactics, and a desire to return to the centre-right glory of the New Labour era.

In his work A Postscript On The Societies of Control, the philosopher Gilles Deleuze explores new modes of control enacted by the state on its citizens. The continuation of Michel Foucault’s commentary on disciplinary societies, which located control within the confines of enclosures, Deleuze’s society of control is one that is limitless, maintained through the ability to protect. For Deleuze the administration is in continual flux, never ceasing to “announce supposedly necessary reforms”. This “limitless postponement” of change and dogged confinement to “reform” banishes political vision into the forgotten realms of idealism

In contemporary Britain, political control tends to be measured against the state’s ability to protect citizens against an enemy that is ever shifting. For Labour, the threat of antisocial behaviour legitimises security reforms and harsher controls, enforced by police working on the ground. With stop and search checks overwhelmingly performed on non-white identities, it is clear that this appeal towards further police protection is conditional.

After Keir Starmer deemed the Black Lives Matter movement a “moment” in July 2020, many have felt alienated as a result of the party’s failure to adequately support members of  Black and Asian communities in Britain. Labour’s pledge to put more police on the streets appears to stoke tensions further, throwing marginalised voters under the bus in an attempt to win back the hearts of the mythical ‘Red Wall’. There is a clear sense of ambivalence towards a demographic who have been at the heart of Labour’s votership for decades. Despite his best efforts, Labour’s historic loss of Hartlepool points to a disillusionment that spans farther than Starmer himself might have predicted.

Angela Y. Davis writes that, for the conservative, “law and order, with the major emphasis on order, is his watchword”. Whilst for many, Starmer’s centrist politics signalled the potential end of factional party disputes and bad press that came to define the Corbyn-era, his appeal to control rhetoric is profoundly alienating to those that still see Labour as a socialist entity. Alongside criticisms that he has failed to articulate a clear vision for the party, Starmer has carved his political mark out of the Blairite playbook, hoping to appease a white-working class population condemned to their assumed position as the silent flag bearing majority. Yet the results of the election reveal that this demographic cannot be so easily bought off.

As the dust settles on Labour’s catastrophic defeat in the local elections, many have been left politically homeless by Starmer’s strategy. A complex history of police reforms and securitisation has come to define Labour’s pledge for power, making it clear that there is no room for the Left in their party. Within a country so polarised by ideas that have been weaponised against us, it seems as though a common ground has been found in regard to Sir Keir Starmer.

Tallulah Belassie-Page is a freelance journalist and News & Politics editor for The New Feminist, with a specialisation in gender politics.