On strike because we care!
Mums and workers joining forces 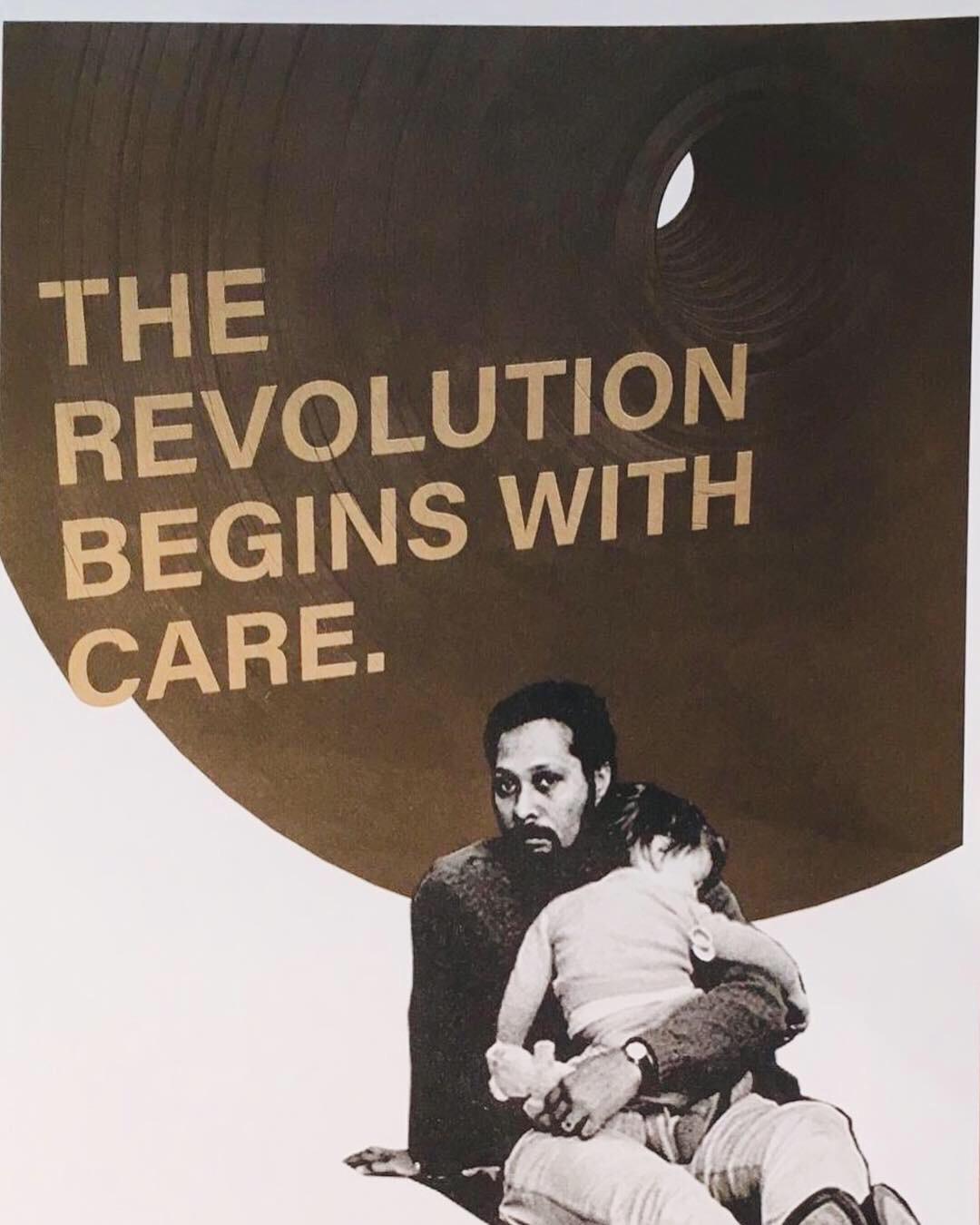 In this blog post, Esther Lutz Davies, one of the organisers of the Women’s Strike Assembly in London, looks through the prism of the crisis of care work to remind us why we must strike on International Women’s Day.

This Sunday, on International Women’s Day, hundreds of thousands of women around the world will be on strike. At the centre of this strike is the work of social reproduction. Care work, of cooking, cleaning, raising children and looking after older people; that doesn’t stop when the so-called ‘working week’ does.

The central slogan of this year’s Women’s Strike in Britain is ‘it is impossible, that is why it is necessary’. For many women, it seems like it is simply not an option to strike, because the work of caring never stops. But this system is in crisis, a crisis that will only deepen as the government introduces new immigration laws, laws that seek to punish the migrant women, who in fact disproportionately do this work. The liberal multicultural economic case for migration has been replaced by a racist and nationalist politics that wants us divided and champions the scapegoating of ‘the foreigners’. That is why we must strike, in ways that make visible the work of reproduction and take aim at the systems that undervalue both the work and the people who do the work.

Our childcare system is in crisis, privatisation has led prices to skyrocket, as the social safety net has been pulled out from under our feet. Inevitably, this rise in prices has not seen a rise in pay or conditions for childcare workers.

In the childcare sector I was paid minimum wage on a zero hours contract as an agency nursery nurse, and later paid living wage but with no contract, sick or holiday pay as a nanny. Shockingly, this is normal. While the cost of childcare has gone up by 5% in the last year alone, since 2013 wages have fallen by 5%. In 2016 almost 20% of nursery staff were earning below the ‘National Living Wage’ which was only £7.20 an hour – clearly not enough for most to live on. This represents the more secure end of the workforce, as the same report showed childminder’s assistants earn an average of just £5.90 an hour. It should come as no surprise that with conditions like these 57% of childcare workers suffer from work-related anxiety.

In England, men make up only 2-3% of childcare workers yet this industry that deeply exploits women’s labour is often built on the feminist rhetoric of enabling mother’s to go ‘back to work’. Koru Kids, a London based nanny agency, sell themselves as enabling mothers to return to paid employment with ‘flexible’ (read insecure) and affordable (read underpaid) childcare solutions. However, the nannies they employ are paid merely £9 per hour, well below a living wage in London. These contradictions are rife in the childcare sector. We need to start to look towards new solutions that put the needs of everyone undertaking childcare work first, whether unpaid in the home or low-paid in the workplace.

Those working in adult care are similarly strained. The average hourly income is just £8.10 per hour, and around a quarter of workers are on zero-hours contracts. Low pay, and poor conditions are fuelling a sector that cannot sustain itself, as turnover of directly employed staff working in the adult social care sector is almost a third-each year, and the average vacancy rate is over 100,000 jobs. The workforce is entirely unsustainable, and this has devastating impacts on those who rely on it for their care. 1.5 million people aged 65 and over in the UK do not have care suitable to their needs, either because they are unable to afford it, or the provision is simply not there. Yet despite this crisis, that leaves the most vulnerable without care, and those who provide care struggling to get by, the government has cut public funding for social care by £700 million over the past decade.

The new ‘points based’ immigration system will push a system on the brink of collapse over the edge, as it already disproportionately rests on the labour of migrant women. This new law will introduce a minimum salary requirement of £30,000, or £25,600 if you work in a ‘shortage occupation’. The vast majority of care workers will not meet this requirement to qualify for a visa, and will fall in the ‘unskilled’ worker category. If you’ve ever looked after a single child, let alone a whole nursery full of them, you will know this labour is far from unskilled, along with pretty much every other job in this new category. The government answer to this impending shortage of workers is to use those currently ‘economically inactive’, in the government’s eyes an untapped labour pool of 8 million people. Here’s the catch, 22% of the so-called economically inactive are those already doing this same care work unpaid at home. All of this unpaid care work, predominantly done by women, is worth £77 billion each year to the British economy. Just like our eco system and social services more generally, our childcare system is at breaking point. We can no longer rely on the unpaid so called ‘labour of love’, anymore than we can rely on the exploited labour of predominantly migrant women doing paid care work.

This is why we strike, because we care, because the current system doesn’t work for anyone. Our strike takes aim at these conditions – making visible the importance of the so called ‘low skilled’ and often silenced workers that have become a political football for the current government. We strike to make clear that without these women’s work, our most vulnerable and society as a whole stands at risk. On March 8th, when we strike, we also begin to build alternative models of care. We will hold free stay and plays, where food and child care is provided by an experienced group of men. We will also have a kids bloc when we meet in the afternoon in central London. This not only enables women to participate but also makes public the care work that is so often confined to the home and the private sphere. Only when we see and acknowledge the vast amounts of reproductive labour that takes place every single day, that keeps the world running, can we start to tackle the crisis of care. 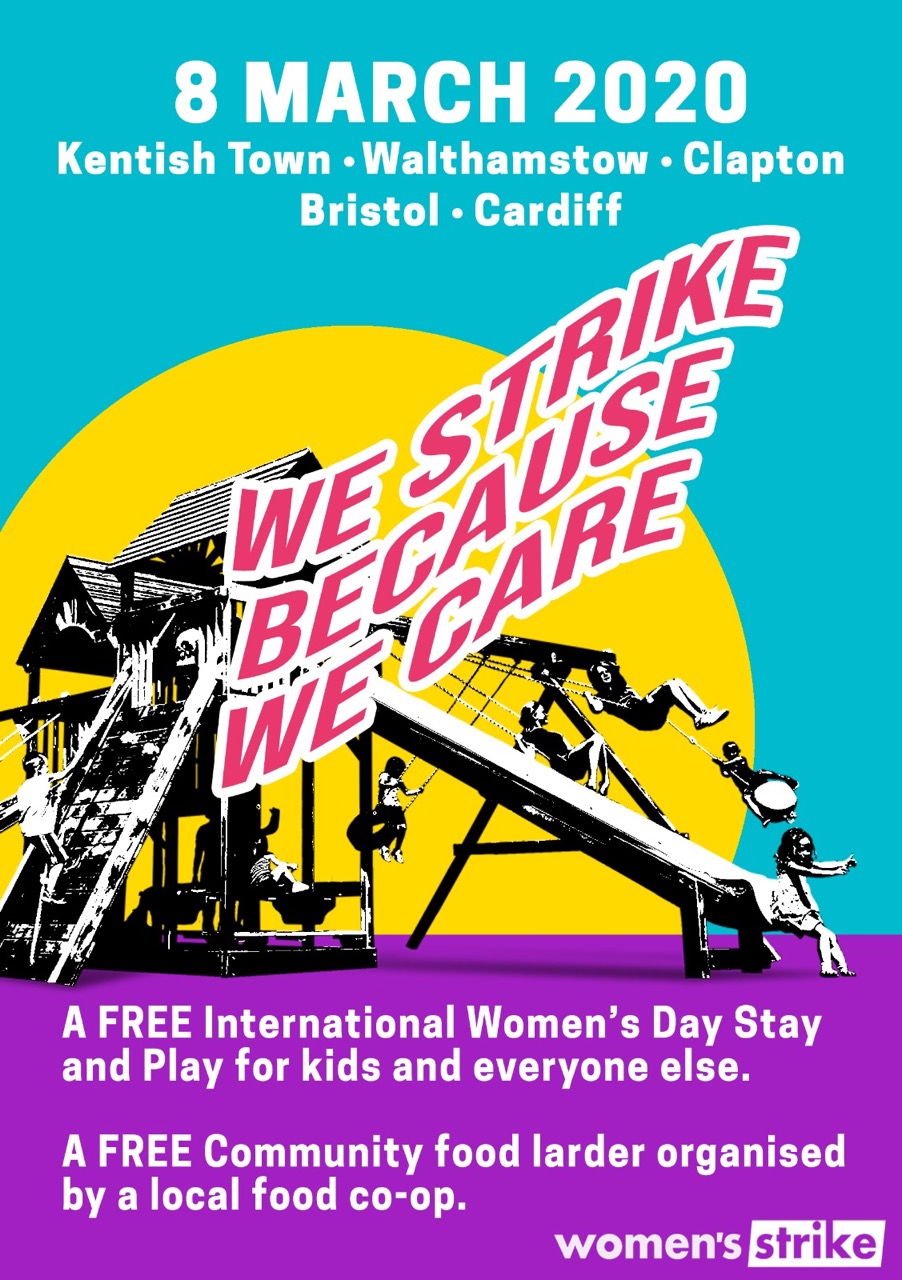