Palm Oil:
The Grease of Empire

by Max Haiven
BUY THE BOOK

This is an extract from the introduction of Palm Oil: Grease of Empire, by Max Haiven, the next book in the popular Vagabonds series: short, radical books to fan the flames of discontent.

One part history, one part dream, one part theory, one part montage, Palm Oil takes us on a global journey to uncover how the gears of capitalism are literally and metaphorically lubricated by this ubiquitous elixir.

We find ourselves in a system of racial capitalism that appears as a vast, globe-spanning system of mystified human sacrifice, hidden in plain sight. The stories I tell in Palm Oil trace this system’s contours and seek answers in its past. These are stories of how one largely invisible thing emerged from the nexus of capitalism, colonialism, and empire to define the cruelties of our world. Secreted within it is a story of our collective power to transform the world for the better. The story of palm oil is our story. This almost magical and ubiquitous substance is part of the way our bodies reproduce themselves and the way our material world is reproduced. It is a key element in the vortex of labor, commodities, meaning-making, and social relationships that make up the world in which we live.

Nearly every element of the process that now finds you reading these words could have been touched or facilitated by palm oil: it could be an additive in the paper, a stabilizer in the ink, or part of the resin in the binding of the book; it is almost certainly either inside or essential to the manufacture of one of the hundreds of the components of the digital electronic device on which I am typing these words, and on which you might be reading them. It’s probable that one of the transport vehicles that conveyed these artefacts to you burned hydrocarbons that included palm oil-derived agrofuels. And it must be taken as given that the body and brain that writes and that reads has been reproduced, in part, through the metabolism of palm oil. We have both used palm oil products to clean or care for our skin. We have ingested palm oil as a carrier of medicines. Though I suspect neither of us are intentionally investors in the palm oil industry, we are nonetheless economically entangled with it. The money that we receive for our labor is blood in the same ocean. Though it derives from a natural source, we created refined palm oil as it exists today, and it has, in turn, helped to created us.

Red, virgin palm oil has been an intimate and vital part of the life of West African peoples for thousands of years, providing food, medicine and cosmetics and serving as a unit of exchange and a spiritual sacrament in many diverse ways.  But the form of palm oil that you and I know is something else entirely: industrially produced derivatives of the palm fruit can, like a god with many faces, appear as some 200 different ingredients in nutritional, industrial, and cleansing products around the world.8 RBD (refined, bleached, and deodorized) oil has become a staple of the diets of billions of people, especially poor people, around the world. This globally traded, indifferent commodity emerges from intensive processing plants, predominantly located in Indonesia and Malaysia, but also in West Africa and Latin America, typically on clear-cut or razed lands that once sustained rainforest, though they may have taken many other forms since. Fertilizer, pesticide, and herbicide used in the intensive cultivation of this cash crop has, more often than not, found its way into local waterways. At these factories, as well as at the nearby plantations on which lab-germinated oil palms grow in neat rows, most of the workers are, in one way or another, displaced, sometimes for multiple generations. Perhaps it was civil war, perhaps imperialist-backed counter-insurgency campaigns, perhaps the ecological impacts of mining, perhaps land grabbing, perhaps it was government or international “development” incentives seeking to relocate workers to locales more convenient for corporations in need of cheap labor. As a result, palm oil workers are now typically dependent on precarious employment for a means of buying the necessities of life.

Today, you and I find palm oil, palm kernel oil or derivatives of these substances in an estimated 50% of the world’s supermarket foods, predominantly in industrially produced, processed foods like packaged baked goods, edible spreads, ramen noodles, dairy products, and snack foods. But palm oil also enters us in trace amounts in a mind-boggling diversity of preservatives, emulsifiers, stabilizers, coagulants and additives. Palm oil’s unique chemical composition and extreme cheapness makes it a perfect base or additive to industrially produced foods to afford a long shelf life and facilitate transit through globe-spanning networks of trade. It covers us, too: it is in the lion’s share of cosmetics (though some higher-end brands occasionally boast of avoiding it). It is an important element in the production of plastics, dyes, inks, paints, and even paper products, including product packaging. It is in many of the lozenges, pills, suppositories, and other consumer and professional medical products that we use to transform our bodies. And it is also present in a multitude of industrial and manufacturing products and processes, notably in the surfactants that are an important part of machine lubricants, dying and tinting processes, detergents, and a dizzying array of other processes. Globally, 72-million metric tons of refined palm oil was consumed in 2020, roughly 20 pounds per human being. Its intensive cultivation has transformed our planet: over 27 million hectares of the earth’s surface is under palm oil cultivation, an area greater than the size of New Zealand and approximately equivalent to all the agricultural land in France. The clearing of forest and especially peatland for palm oil cultivation adds significant quantities of carbon to the earth’s atmosphere—an estimated 6% of global annual emission—contributing to the dire, if unevenly distributed, risks of climate change.

Our story will necessarily begin with the origins of the global commodity of palm oil in the European colonization of West Africa in the nineteenth century, where whole civilizations and millions of lives were sacrificed on the altar of that three-faced god: capitalist accumulation, white supremacist ideology, and inter-imperialist rivalry. We will visit nineteenth century Liverpool, where palm oil literally and figuratively lubricated the wheels of empire and furnished rich and poor alike with new commodities like soap. We will travel with some tender seedlings on steamships with palm-greased engines to South East Asia, to British and Dutch colonies where imperial powers took advantage of the social, economic, and environmental disjuncture they themselves had unleashed to open up new lands for palm oil plantations, and to recruit dispossessed and migrant workers, often through techniques of debt bondage. Today the independent nations of Malaysia and Indonesia are undisputed palm oil superpowers, though the legacies of colonialism remain pivotal in the industry. We will follow the oil as it seeps through the fabric of our world, becoming the fat of the world’s poor and the grease of capital’s global empire.

In this short book I am trying to understand something that is abundantly obvious and yet somehow also unseeable: this system seems to be a vast and merciless organization of human sacrifice. The relentless logic of the market insists that the millions of needless deaths from malnutrition, toxic poisoning, overwork, sabotaged migration, climate chaos, or neo-imperialist wars are somehow accidental, incidental, or inevitable. By following palm oil, I want us to recognize the way we are all bound up in a global paradigm none of us chose, but that benefits some vastly more than others, and places so many on the altar of accumulation.

Palm Oil: The Grease of Empire is out on the 20th April.

Pre order your copy of Palm Oil and receive four limited edition tarot cards with artwork from the series. 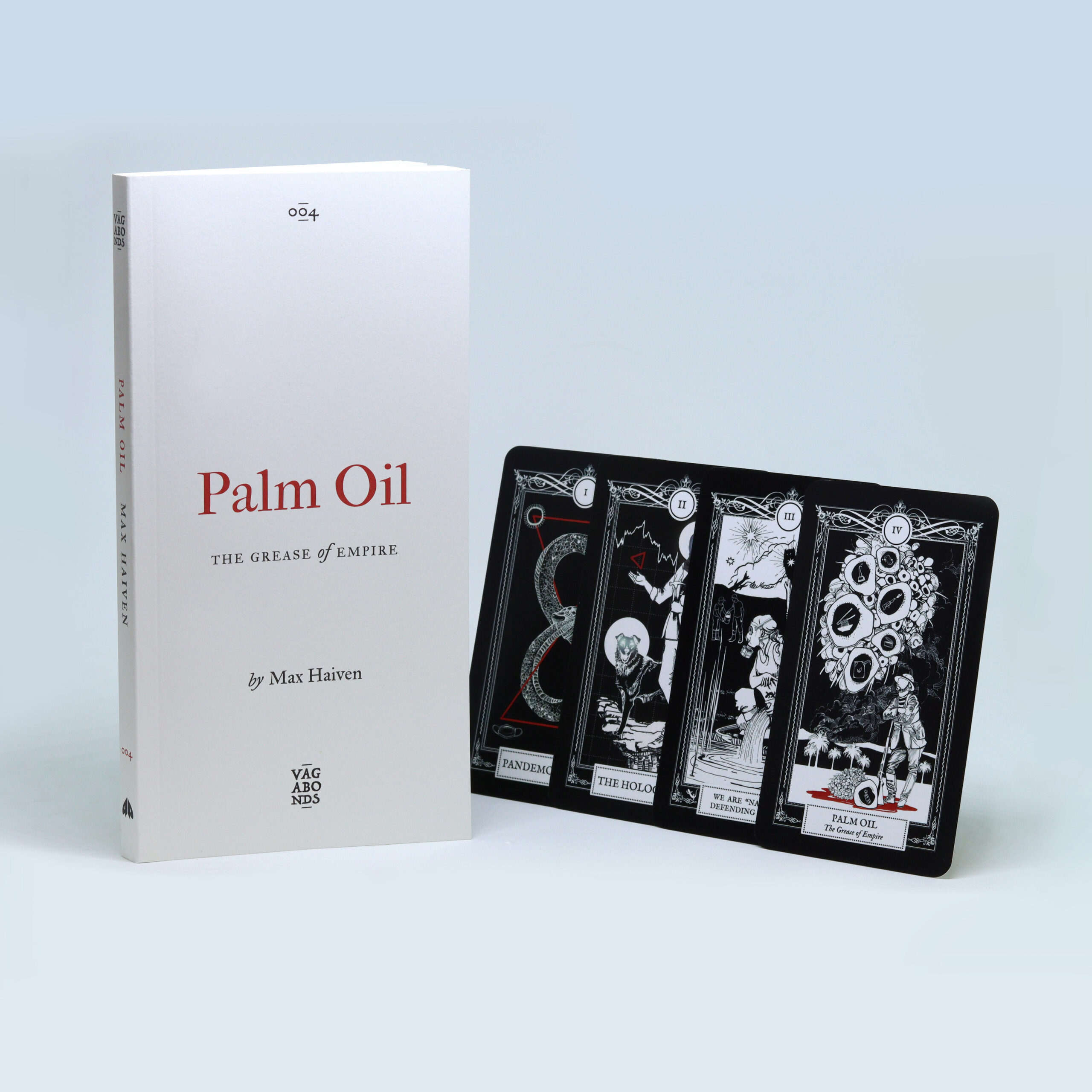