by David Harvey
BUY THE BOOK

Extracted from his new book The Anti-Capitalist Chronicles, David Harvey puts his sharp intellect to work unpicking one of the most important parts of Marx’s Capital, dealing with the remarkable story behind the concept of primitive or original accumulation, and how it manifested from the origins of capitalism to the daily violence of expropriation, expulsions and evictions occurring in our society today.

‘Part Eight of Capital deals with what Marx calls primitive or original accumulation, which is the story of how capital came to be and how it came to power. One of the things I like about reading Capital is that Marx changes his writing style depending upon the topics he’s covering. There are some passages which are very lyrical, some passages are densely theoretical, some passages which are factual historical accounts, while others are dry as dust accounting of how much of this equals that. But the final session on primitive accumulation is composed of short, sharp and brutal chapters. It is almost as if Marx is trying to emphasize through his writing style the brutality and the violence through which capital came to be what it is.

The story that Marx tells of the origins of capital is one which went against then prevailing bourgeois opinion and accounts. The political economists of the time presented the story of how capital began as a virtuous story. There were some people who were careful and thoughtful, abstemious and responsible, who looked to the future and were capable of deferring gratifications. Then there were those who were profligate and who chose to spend their time in riotous living. The virtuous people became the entrepreneurs who deferred gratification, who saved, accumulated and looked to the future. The profligate individuals were left with the only possibility of making a living; which was to offer their labor power to the frugal capitalists who took responsibility for how it might be fruitfully put to work. The other story with which we’re now more familiar but which was also around in Marx’s time was that capital derived from Christian virtues, an interpretation that Max Weber later on turned into a major text, The Protestant Ethic and the Origins of Capitalism. An ethical Protestantism and Quaker abstinence came to the rescue of a failing feudal economic system. Quaker virtue, deferred gratification, careful management of money, entrepreneurial skills, and loyalty to family supported by private property lay at the root of the rise of capitalism. Marx didn’t have Weber’s version of the story, but there were plenty of accounts that emphasized the nature of Christianity, Martin Luther, and Quaker forbearance for Marx to dwell upon. Marx takes on all such accounts and dismisses them. Things did not happen that way. The reality was that capital came into being in, he says, “letters of blood and fire.” It was a violent, brutal process; the usurpation of a former system of governance, a usurpation of power relations, the robbery, thievery, violence, fraudulence, the misappropriation of state power, the utilization of almost every kind of criminal means that you could possibly imagine.

The main story Marx wants to tell is the violent means by which the mass of the population was deprived of access to the means of production – most notably the land – and deprived of the possibility of reproducing their daily life outside of selling their labor power as a commodity to the nascent capitalists. This violent expropriation, and this violent reorganization of the social order was, as far as Marx was concerned, the original sin of what capital was about. And I think it is interesting to see the way in which he articulates this notion of an original sin. Because there are some thinkers, for instance Derrida, who would say that any social order, as it comes into being, bears the marks of its violent origins, and that social order can never expunge that history. The violence of its origins continually haunts it and returns, again, and again, and again to haunt it.

This is a very good moment to look at the return of many of these violent forms of expropriation, expulsions, evictions, and the like which Marx describes as being present in the very origins of capitalism. It turns out that a lot of this sort of thing is going on all around us today. The fraudulence, and the lying, the mystifications to cover over the egregious appropriation which is going on by the wealthy and the powerful, preying on the vulnerable and the small groups in the population. This is an interesting moment to contemplate how we are currently being haunted by the violence of primitive accumulation.

Marx argues that the feudal order was undermined in a number of very distinctive ways. It was undermined partly by merchant capitalism based on buying cheap and selling dear or directly appropriating products from vulnerable populations powerless to resist the military and financial power of the merchants. The order was also undermined by usury. The money lenders did a good business of dispossessing the lands. So if you put together the money lender and the merchant capitalist, together they undermined feudal power. This opened up the possibility for the accumulation and concentration of money capital in very few hands. This could then be used to try to dispossess the mass of the population of whatever productive assets they controlled. Marx’s story of primitive accumulation is in the end about the formation of the working class that has no means of existence or subsistence apart from selling its labor power in labor markets.

This is the secret that Marx wishes to reveal to us through various historical stages. It occurs of course first on the land, so you get the appropriation of the land, the enclosure of the land as commons, the imposition of private property on the land; and the gradual assembly of the land through the despoliation of the Ecclesiastical estates, the taking away and the privatization of state (or royal) ownership right to the land. This privatization produced a class of landed capitalists whose main task was to separate workers from the land so that they were forced out into the streets. What this meant, Marx argues, is a collapse of a social order that had been based upon access to the commons. So, one of the big movements that we see is the enclosure of the commons which is actually a legal process. Marx emphasizes the way in which illegal processes of expropriation eventually become legal processes of expropriation. The state commanded by capital passes laws to expropriate populations and privatize access to the land. Industrial capitalists arise in a different way. They take landed property and the existence of wage labor as their basis but take money power, and start to use it to make more money. This is the originary moment of capital.

This is a remarkable story that Marx tells in Capital. And he tells it in various ways. But one of the things that is very striking about it is the tremendous hypocrisy upon which this system is founded. And the hypocrisy really lies in this: that, on the one hand, liberal theory takes the view that private property arises when individuals mix their labor with the land and assert their unchallengeable right to the product of their own labor. But workers employed by capital do not have a right to the product of their own labor. That product belongs to capital. And workers do not have a right, either, to control the labor process because the labor process is designed by capital. The theory of liberal rights proposed by John Locke turns out to be completely perverted – turned on its head – by what happens in the seventeenth and eighteenth centuries as society begins to move towards a more capitalist social order based on wage labor.

The reason I think this is important is to ask the question: to what degree are the processes of primitive accumulation that Marx describes still with us? Marx sometimes seems to make it seem that once upon a time capital was riddled with these illegal violent processes. But, once capital had arisen and formally been constituted, then all that earlier illegality can be done away with and we’re left with a society where, as Marx puts it, the subtle economy of decision-making through an economic system precludes violent expropriations and the rule of law takes over. So you get the impression from the first part of Marx’s Capital that there is essentially a peaceful and legal market process; that market exchange is well established, that the equalization of the rate of profit is well established, that private property rights are well established, and so on. The free market system is presumed to work in a perfected rather utopian way. In the first few chapters of Capital Marx does take up the utopian visions of the classical political economy of Adam Smith and Ricardo. He says, in effect, let’s accept their utopian vision and try to figure out the theory of how capital works on the basis of free market exchange, a legal system based on private property rights, and the like. So, you get the impression that, once upon a time, there was a violent confrontation which led to the rise of capital. But then afterwards, capital settled down and became a legal system, and everything was being worked out according to the laws of motion of capital accumulation. What Marx shows is that this system does not operate to the benefit of all (as Adam Smith claimed) but that it privileges the rich capitalists vis-à-vis the poor workers. But this was a legal process and, therefore, violence, and expropriations, and expulsions, and so forth were no longer necessary.

But if we look at the way in which society is being organized today, we see a great deal of violent expropriation going on, and a great deal of violence and coercion in relationship to the employment of labor. We are surrounded by a daily violence actually occurring in society. It appears as if the original sin of capital perpetually returns to haunt us. In our own times, this is becoming a crucial question: how to confront what in effect is the illegality of capital? Unfortunately, it is not the case that the theory of capital proposed by utopian classical political economy prevails. It is no longer the case, if it ever was, that capitalism can be construed as a peaceful, lawful, and non-coercive system. In fact, what we’re dealing with here is not only the continuation but the resurrection of systems of violent expropriation that occurred in the past. We live with a form of capital based not upon the equality of exchange but a certain violence of expropriation and dispossession.

David Harvey is Distinguished Professor of Anthropology at the Graduate Center of the City University of New York. He has written extensively on the political economy of globalisation, urbanisation, and cultural change. His recent books include The Anti-Capitalist Chronicles, Seventeen Contradictions and the End of Capitalism (Profile Books, 2014) and The Ways of the World (Profile Books, 2016). He contributed the foreword to the Pluto Press edition of The Communist Manifesto (Pluto, 2008; 2017). 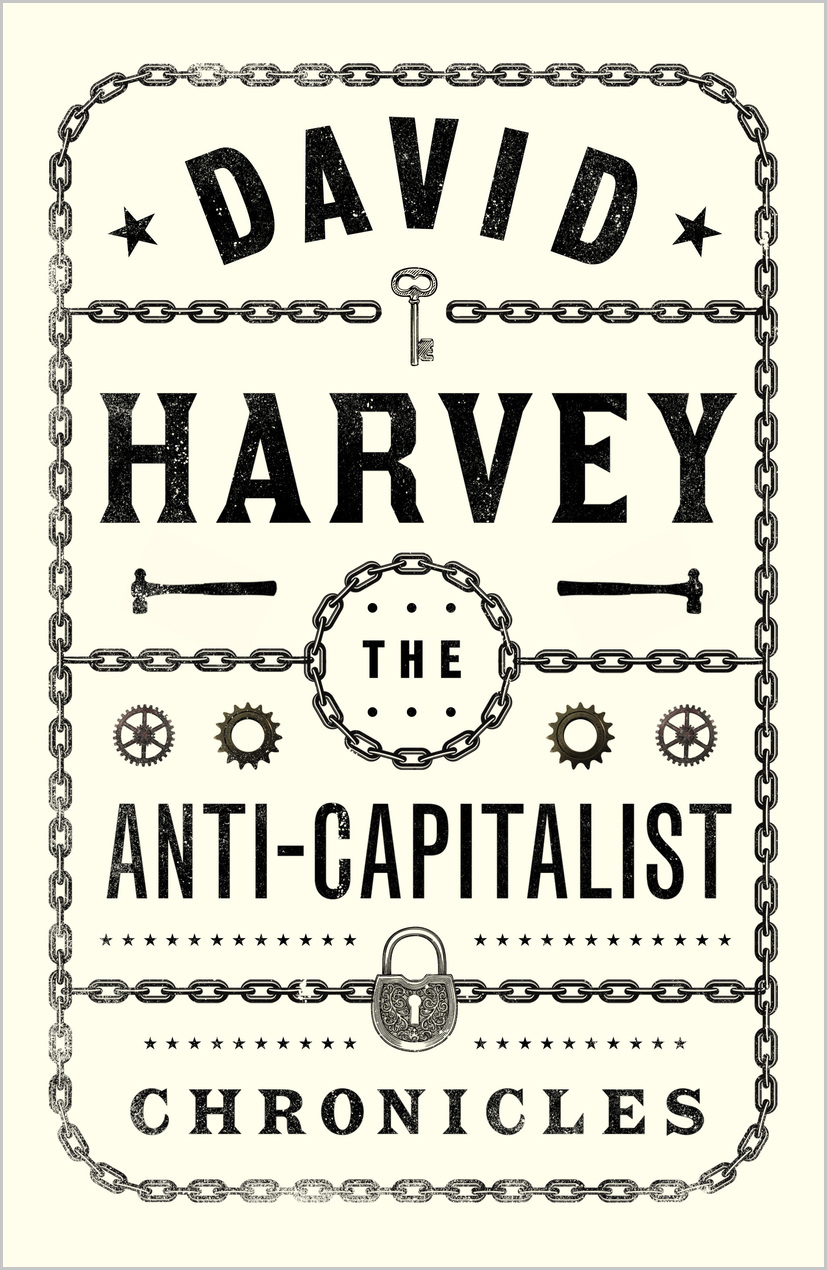