by Peter Hudis
BUY THE BOOK

Frantz Fanon (1925-1961) was a Caribbean and African psychiatrist, philosopher and revolutionary whose works, including Black Skin, White Masks are hugely influential in the fields of post-colonial studies, critical theory, and post-Marxism. Peter Hudis, author of the biography Frantz Fanon: Philosopher at the Barricades, discusses the contemporary relevance of Frantz Fanon for intersectional discussions of race and class.

A series of recent exchanges between activists in the Black Lives Matter movement and those turning out to hear Bernie Sanders’s populist critique of corporate power have brought to the fore a persistent contradiction of U.S. society —the relation between race and class. It is significant that around the country tens of thousands of largely white youth are coming out to hear Sanders’s attack on the plutocracy that has turned the U.S. into one of the most class-divided societies on earth. Clearly, some of the same sentiments that gave birth to the Occupy Movement are behind the surge of interest in Sanders’s candidacy. 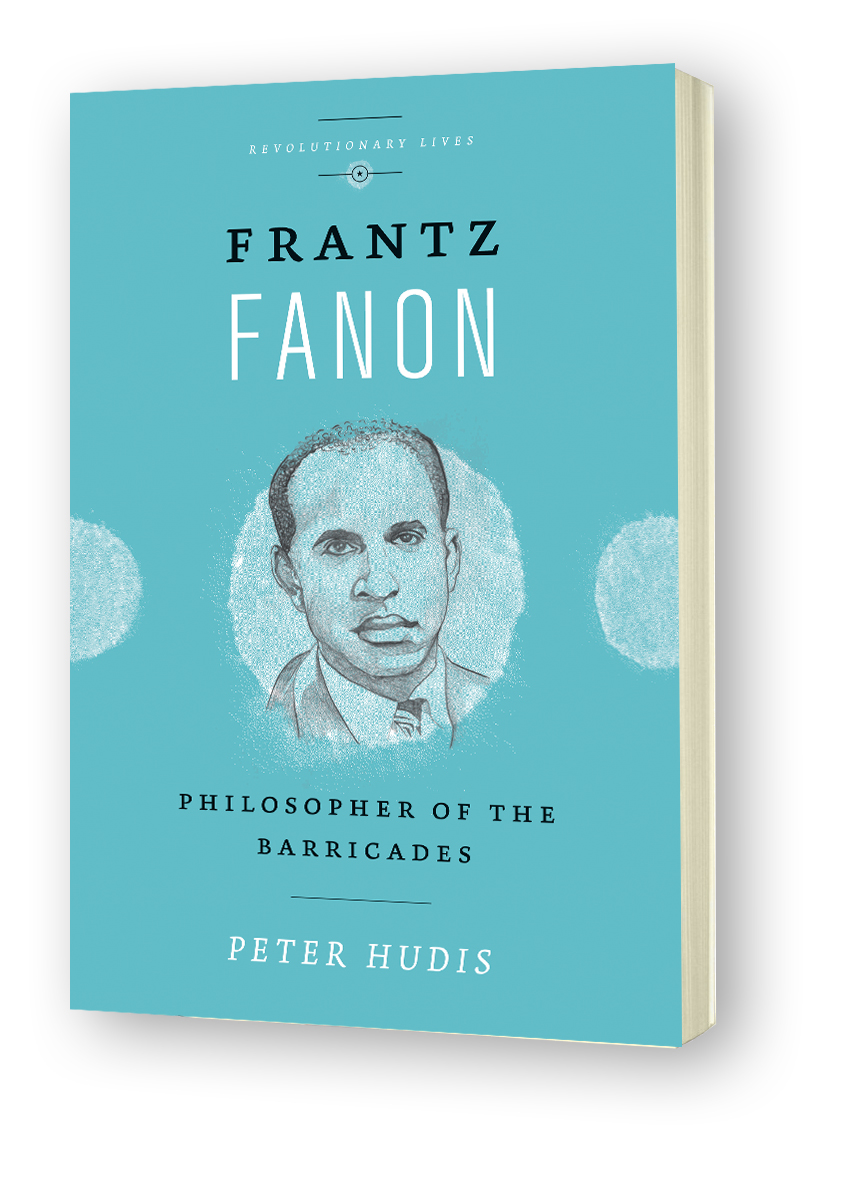 Yet it is no less significant that Black Lives Matter, and others, have challenged his campaign for largely overlooking issues of race and racism—at the very moment when a powerful movement has emerged from people of color who are besieged by persistent police abuse and a criminal justice system that has made it clear that, insofar as it is concerned, black lives do not matter.

What are we to make of this debate, and how will it play out? Will anti-racist activists and those seeking to counter corporate power through the electoral process proceed on separate paths? Will their differences be papered over for the sake of a superficial harmony, or will this debate become an opportunity to think through the very real contradictions facing U.S. social movements when it comes to grasping how race and racism play a central role in shaping the nature of class and social relations in the United States and elsewhere?

It may be too early to answer these questions, but it is timely to re-examine the work of Frantz Fanon in light of them. As one of the foremost theorists of race and racism of the past century, his ideas are returning to the forefront of discussion; in large part because of the way in which the increasingly class-polarised nature of contemporary capitalism is inseparable from an ongoing assault against people of color and immigrants, not only in the U.S. but in Europe as well.

This is not to suggest that Fanon developed some grand theory that resolves the contradictions of race and class that continue to plague us. Nor did he write much about the U.S. and its social contradictions. As he stated in his first book (Black Skin, White Masks), ‘I’m not the bearer of absolute truths.’ Instead, Fanon theorised from the vantage point of his lived experience as a Black man who was born and raised in a specific corner of the West Indies—Martinique—and who later spent much of his life involved in the movements seeking the independence of Algeria and other African countries.

As I argue in my book Frantz Fanon: Philosopher of the Barricades, Fanon theorised (as we are all ultimately compelled to) from the zero point of his orientation. This was not for the sake of privileging his experience above that of others, but rather because he understood that any effort to grasp the meaning of social phenomena has to proceed from the lived experience of the actual subject. This did not lead him, however, down the path of cultural relativism and a denial of universalism—unlike some of his postcolonial critics and admirers. Instead, his effort to grasp the psychodynamics of racism in relation to socio-economic and political forms of domination was inseparable from a determination on his part to rediscover what it means to be human in an increasingly dehumanised world. 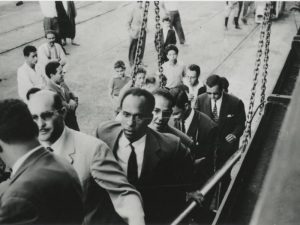 So how can Fanon’s work speak to the kinds of issues we face today, especially in light of the pressing need to comprehend and work out the complex relations between race, class, and gender? One important way to address this is by situating him in relation to the Marxian tradition; something that has often been overlooked in earlier studies. Fanon engaged with Marx and Marxist theorists from the inception of his intellectual career, especially when studying in France in the late 1940s. His debt to this inheritance is evident in his first book, when he writes, ‘The analysis we are undertaking is psychological. It remains, nevertheless, evident that for us the true disalienation of the black man implies a brutal awareness of the social and economic realities.’ Later, in The Wretched of the Earth, he makes this more explicit by arguing, ‘A Marxist analysis should always be slightly stretched when it comes to addressing the colonial issue.’ Slightly stretched, but not rejected or abandoned. Fanon never ceases to remind his readers that anti-black racism is deeply rooted in the structure of capitalist class society and cannot be understood apart from it.

At the same time, he was not content to leave matters there. He never viewed racism as an epiphenomenal consideration or as a mere cover for class domination. He understood that racism, once necessitated and generated by capitalist relations of production, takes on a life of its own and structures the lived experience— including the interior, psychic existence—of individuals in society, both black and white. He sought to comprehend the inner life of racism, the way it leads us to see others and ourselves in such a way as to not see each other as human subjects, thereby producing a breakdown in the most fundamental of intersubjective connections. Most of all, he wanted to understand the pathway by which victims of racism and ethnic discrimination can overcome the neuroses and fixations that accompany such forms of domination—such as self-hatred, the development of an inferiority complex, and seeking social acceptance by mimicking the oppressor. All of this made it necessary for Fanon to go beyond a mere economic or class analysis and instead explore the inner psychic life of racist oppression.

The crux for Fanon, therefore, is to pay careful attention to the particular ways by which victims of racism seek to assert themselves in response to the racial degradation that is an integral part of the colonial condition. There is no way, he held, to reach what Marx called ‘universal human emancipation’ except by journeying through the particular—that is, affirming and taking pride in the very socially-constructed attributes of ‘blackness’ that existing society seeks to denigrate and demonise. You cannot expect to be accepted as a human being if you are denied recognition because of your race, gender, or ethnicity. The challenge, Fanon held, is to neither leap to the ‘universal’ (defined by him as a ‘world of mutual recognitions’) by skipping over the particular—such as by pretending that we now live in a ‘colour-blind’ society—nor to become trapped in one’s particularity by losing sight of the universal. This journey is a difficult path one to navigate, but it is one that Fanon thought more deeply about than perhaps any other thinker in the anti-colonial tradition. His reflections on this issue owe much to his critical engagement with Hegel’s dialectical philosophy as well as the negritude poets and philosophers of the African diaspora—an intellectual debt that is evident not only in Black Skin, White Masks but also in A Dying Colonialism and The Wretched of the Earth.

Fanon does not proceed from the assumption that humanity consists of atomised units who are merely thrown into a hostile, alien world; instead, he contends, ‘Man is a ‘yes’ resounding from cosmic harmonies…man is propelled toward the world and his kind.’ Racism, the ultimate form of thingification and reification, blocks such intersubjective communion. As against this, he reached for a fundamental social transformation that could lead to a world of reciprocal recognitions. It is important to note, however, that Fanon’s work has nothing to do with liberal theories of recognition, which aspire for individuals to be acknowledged as having equal political rights. Nor does it have anything to do with begging for recognition from the dominant forces of white society. Fanon clearly understood that the additive of color in relations between rulers and ruled signifies that the former never provides recognition to the latter, since their racist mindset prevents them from seeing them as human beings.

Nevertheless, the need for recognition on the part of the colonised subject persists, which is what makes its struggle to affirm and develop national culture and national consciousness so crucial. Struggles that affirm the pride and dignity of those subjected to racism provide the mental sediment that can enable the oppressed to stand on their own feet, establish intersubjective connections with others of their own kind, and demand from society not only an affirmation of formal political equality but a transformation of the very structure of human relations. This is, indeed, what Fanon looked to as the ultimate goal of all anti-colonial and antiracist struggles—the development of what he called ‘a new humanism.’ As he put it ‘national consciousness that is not nationalism is the only thing that will give us an international dimension.’ 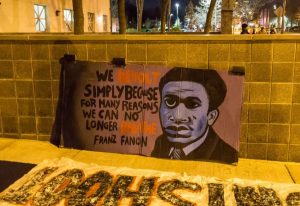 It goes without saying that Fanon did not live to see such a new humanism come to be. As he prophetically argued in his last book, The Wretched of the Earth, the newly-independent countries in Africa and elsewhere quickly fell prey to the machinations of the national bourgeoisie, who used the mass struggles as a mere vehicle to secure their power and privilege—at the expense of those who made independence possible. His dire warning of what happens when the struggle against racism and colonialism loses sight of the ultimate goal of transforming human relations remains as important today as when it was written. Indeed, in some respects it has become more important, in light of the many unfinished and aborted revolutions that we have experienced over the past 50 years.

True, Fanon may not provide us with a golden key to resolve the questions of our time, and he surely would never have pretended otherwise. What a reexamination of his thought can achieve, however, is for us to come to a better understanding of the complex inter-relation between race and class as we try to work out how today’s struggles against racism, sexism and class society can lead to a new humanism.

Peter Hudis is Professor of Philosophy and Humanities at Oakton Community College and author of Marx’s Concept of the Alternative to Capitalism (Brill, 2012). He edited The Rosa Luxemburg Reader (Monthly Review Press, 2004), The Letters of Rosa Luxemburg (Verso, 2013).

Frantz Fanon: Philosopher of the Barricades is available to buy from Pluto Press.