By Ursula Huws
BUY THE BOOK

‘£2.5B in NHS opportunities last week’ crowed the outsourcing consultancy Tussell last week, in what is yet another reminder that our welfare state has become a gold mine for private companies. As a recent Institute for Government report pointed out, by 2017 more than a third of all UK public spending was spent on procuring goods, works and services from external suppliers – a trend that has, if anything, accelerated further since the Coronavirus epidemic.

But it hasn’t always been this way. Our welfare state was founded after World War II, in Beveridge’s memorable phrase, to fight the five ‘giant evils’ of squalor, ignorance, want, idleness and disease. In setting it up, the post-war Attlee government was guided by two key principles: universality and redistribution. Healthcare, secondary education, child benefits and a national insurance system providing pensions and a social safety net were provided equally to all, paid for in a manner designed to ensure that the rich paid relatively more towards their cost than the poor, through graduated levels of income tax, inheritance taxes and purchase taxes on luxury goods.

Although by no means perfect (especially in the way it treated women and immigrants), the post-war welfare state could be imagined as a communal pool that drained surplus resources from the more fortunate to make sure that the less fortunate never fell into destitution. In the seventy years that have elapsed since then, state spending has continued to grow, leading many people to believe that the state has become ever-more generous, feeding hosts of undeserving scroungers at the expense of hard-working taxpayers – a belief that is mightily encouraged by the right-wing press and the designers of daytime television shows.

This makes it very hard to see that – though the pool is still there – a sneaky recalibration of the pipework has taken place behind the scenes and the direction of flow has altered decisively. It is now fed disproportionally by the poor while the rich are siphoning out most of its contents. According to the Institute for Fiscal Studies, less and less state income is coming from corporations and the rich, and more and more from VAT and other indirect taxes. And, as Richard Murphy has shown, ‘the poorest 20% of households in the UK have both the highest overall tax burden of any quintile and the highest VAT burden’.

Meanwhile, a closer look at what is being disbursed shows that funds are channelled inexorably towards corporations and the rich. Where does housing benefit end up? In the hands of private landlords. What happens to the money that is spent on health, education and social services? A growing proportion of it ends up profiting the private companies that provide outsourced services, charge rent and maintenance fees under PFI contracts, or run nursing homes and private academies. And when it comes to the tax credits that are paid to low-earning households as soon as we ask why their wages are so low it quickly becomes apparent that these credits represent what is in effect a subsidy to cheapskate employers who pay below the cost of subsistence.

So much for redistribution, but what about that other key feature of the welfare state: its universality? Again we find that this has been whittled away over the years. Nowhere is this more apparent than in the labour market where the standard employment model of the mid 20th century is rapidly disappearing – along with the rights and protections that accompanied it.  No longer does unemployment benefit exist as a right. ‘Jobseekers’ have to jump through innumerable bureaucratic hoops to claim benefits, which are withdrawn on the slightest pretext, and are pressured into taking whatever work is available, no matter how low paid or inappropriate to their abilities. The punitive sanctions regime combines with universal credit to create a forced labour system not unlike that of a 19th workhouse – though the Victorian workhouse would at least have provided them with a bowl of gruel, a dry bed and a roof over their heads.

Protected, full-time permanent employment is being replaced by casual, on-call work manage by algorithms and with a dearth of rights. Research I carried out with colleagues at the University of Hertfordshire found that the number of adults working for online platforms doubled from 4.7% to 9.6% just in the three-year period between 2016 and 2019. Since the pandemic it has grown still further. Platform workers are trapped in a vicious cycle whereby money chases time poverty. 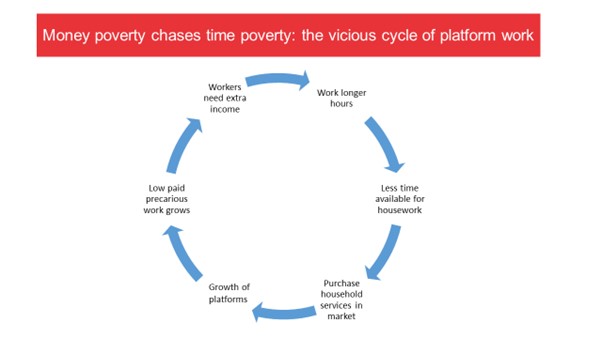 It is clear that our welfare state is no longer fit for purpose. But how can it be fixed? My new book, Reinventing the Welfare State argues that, like Humpty Dumpty, the 20th century model cannot be put back together and, indeed, it would be a mistake even to try. This is partly because globalisation and neoliberalism have transformed the world so profoundly that the conditions that gave birth to it are no longer tenable. But partly too because it was profoundly flawed from the outset, in particular in the ways that it failed to provide equality for women, justice for immigrants and respect for the planet.

What is needed is a complete reboot – a redesign of the welfare state for the digital age, but one which, rather than tinkering with the details of the carcass we have inherited, goes back to the underlying principles that inspired the mid-20th century social democrats.

The book does not attempt to create a complete blueprint for this ambitious project.  Rather, it focuses on four key features:

Reinventing the Welfare State: Digital Platforms and Public Policies is out now from Pluto Press.

It is part of the new Fireworks series: short, sharp guides to the contemporary challenges, crises and political movements for social justice.

Ursula Huws is Professor of Labour and Globalisation at the University of Hertfordshire. She has been carrying out pioneering research on the economic, social and gender impacts of technological change, employment restructuring and the changing international division of labour since the 1970s, combining scholarship with activism and popular writing.