In mid-June 2017, the Russian Defence Ministry released a statement in which it announced that an air strike its forces had conducted over Raqqa, Syria on 28 May might have killed Abu Bakr al Baghdadi, the leader of the Islamic State (ISIS) – the radical Islamist armed group that had been holding that city since the spring of 2014. A month later, on 21 July, both the United States Defence Secretary James Mattis and the director of the US National Counter-Terrorism Centre, Nicholas Rasmussen, declared that they believed al Baghdadi to still be alive. A similar claim had been expressed a few days earlier by a top Kurdish counter-terrorism official who indicated that he was ‘99 per cent certain’ that the ISIS leader was alive. Combined with the media wall-to-wall coverage of the long-awaited retaking the Iraqi city of Mosul on 10 July, a town also controlled by ISIS since June 2014, such focus on the killing or arrest of the group’s leaders has revealingly boxed the reading of what ISIS is in a short-term, uncritical and ultimately unsophisticated perspective, which is no longer tenable.

Since its emergence in the early 2010s, ISIS has so far been studied overwhelmingly under a reductionist mainstream journalistic sensationalist approach and a policy-oriented security expertise – the same twofold perspective that had been used previously for analysis of Al Qaeda in the aftermath of the 11 September 2001 attacks on the United States. Specifically, focus on the group’s extreme violence and its alienating discourse has prevented deeper examination of the political and social conditions behind its rise. Close to two decades after the 9/11 attacks conducted in New York and Washington by the transnational non-state armed group Al Qaeda and several years into the Islamic State’s own saga, the patterns of a transforming form of globalised political violence are cementing and the longer-term impact of the Al Qaeda/Islamic state story is perceptible vividly beyond the latest episodic ‘crisis’, ‘attack’ or ‘terror’. Captive to a self-imposed normative cul-de-sac on the issue of radical Islamism generally and Al Qaeda and the Islamic State specifically, social sciences have so far failed to initiate a historically-contextualised, global (not merely Western or Westernised) and nuanced discussion on the phenomena at hand.

For every time a new radical Islamism-related attack takes place in New York, Washington, London, Paris, Brussels, Berlin or Barcelona, a ritual of denial of the deeper political issues raised plays out in an increasingly familiar fashion. The sequence is performed thus: shock gives way to fear followed by anger; security experts step up hurriedly in television studios and on social media to denounce the lack of preparation by the authorities; specialists of radical Islamism (or simply Islam) follow on declaring that IS (previously Al Qaeda) has been weakened, is on its way to be defeated and is merely lashing out with desperate attacks; Muslim communities in Western countries are called out and racist and violent attacks against them sometimes take; calls for tougher legislation (surveillance mechanisms, detention conditions, nationality measures, immigration procedures, travel regulations, dress codes, access to pools, prayer sites,…) are spoken urgently; arrests are made in neighbourhoods where Muslim migrants are known to reside and bombing is redoubled in Iraq, Syria, Afghanistan, Yemen or Libya.

In such a context where ethos becomes pathos, and above and beyond IS itself, its extremism and violence, such perspective has deeper problematic roots for social sciences. In the contemporary political geography, terrorism has been in effect not-so-subtly placed in the middle of a canvas that has been painted in the vivid green and black colours of Islam. As a result, the notion of terrorism is now in a state of conceptual deformation whereby the elasticity it has been given in recent years allows it to serve almost exclusively the purpose of identifying threats against Western states and societies coming primarily from Islam and faceless Muslim attackers. To be certain, terrorism suffered by other regions is reported regularly and portrayed equally as an ill of our times to be dealt with urgently. Indeed, according to the Global Terrorism Index released annually by the Institute of Economics and Peace (IEP), the first casualties of terrorism in this period were Iraqis, Afghans and Nigerians. However, the core representation of terrorism per se in the well-embroidered media and policy drapery is clearly and centrally the menace it represents to the West. An illustration of this only-partially coded reality is the inconsistent use of the term ‘terrorism’ by mainstream media, at once resorting to it reflexively when attacks have Muslims associated with them, and opting for another terminology (‘attack’, ‘shooting’, ‘security incident’, ‘assault’, ‘situation’…) when events of similar nature have different type of perpetrators involved. When, on 19 June 2017, Darren Osborn drove a van into a crowd near the Finsbury Park Mosque in London, re-enacting a terrorist modus operandi seen earlier in London, Berlin and Nice, the BBC and CNN refrained from using the term terrorism for several hours initially depicting the attack as a ‘collision’.

Regularly replayed and patterned in such de-politicised and culturalised ways, the contemporary presentation of political violence has not evolved significantly beyond this static dimension. For the majority of commentators, the Manichean problematique has remained one of ‘terrorism and counter-terrorism’, ‘them against us’, ‘Middle East strife’ (a region given only in terms of ‘unreadability’, ‘enigma’ and ‘riddle’) and ‘Islam and its problem’. The actual political archaeology of the group has been side-lined, displaced by a Pravda-like focus on religion and rah-rah presentism that is emptying the historical context of its crucial backdrop. Going beyond the important domestic and regional story of the evolution of radical Islamism, the Islamic State can be see more importantly as the historical manifestation of the persistent dystrophies long playing out politically between the West and the Middle East (and, beyond, the Islamic world). In time the problem emerged thus: to understand Western terrorists of the 1970s such as the German Red Army Faction or the Italian Red Brigades, one is invited to examine the societal conditions of post-war Germany and Italy, the ambient malaise in these countries twenty-five years after Nazism and fascism and their relationship with their rebellious youth; to make sense of Al Qaeda or the Islamic State, one is asked to read the Qur’an.

The more this story proceeded monotonically, the more its intellectual contradictions became visible as a matter of political violence dealt with by minimally and peripherally by historians, political scientists and sociologists. In effect, media vigilantism, terrorism expert pronouncements and condescending interrogations of Islam and its long-awaited aggiornamento have joined hands to produce a non-history of one of the dominant forms of contemporary non-state violence. The larger setting of this inconsistent call-and-response construct is the absence of a dispassionate, intelligent framework to understand the question of contemporary terrorism and its consequential permutations away from a unilateral and (Western) state-centric stance. Such work has also a direct, if unspoken, relationship with the contemporary practice of power and the projection of force in long-skewed international relations. The wider discussion that has not been tapped into and was indeed kept at bay when it comes to understanding the origins of the contemporary transnational violence of the Islamic State and before it Al Qaeda concerns two important ongoing phenomena of our times that have been termed respectively the ‘decolonisation of international relations’ and the ‘decolonising of war’. For indeed who’s-up-and-who’s-down scorekeeping accounts of the rise of IS are not sufficient to make sense of the incubating, asynchronous and dysrhythmic transformation of terrorism taking place at the hands of IS or other new groups. The pantomime of stylised rituals and storytelling about IS partakes, more importantly, of the making of a neo-imperial culture that ascribes irrational barbarity to political extreme violence so as to avoid addressing the reasons for that violence’s recurrence. As noted, with each new attack, the same set of arguments is restated tirelessly to establish authoritatively the apocalyptic nature of the actor. Arguing that we are missing the point if we delve too much into history, such insta-catchy narratives decouple the actors from their context to endow them with a maximal dangerousness underwritten by an unshakable evil character displayed by these super-predators. The result is not so much advancement of knowledge but emotional release and ethical pronouncement.

The straight-jacketing of the terrorism discussion evidences a larger problem of the paternalism, chauvinism and Orientalism that sit atop security discussions of issues playing out in the Middle East and North Africa, the wider Muslim world as well as Africa. One route to remedying those shortcomings is to upgrade the presence of alternative histories. and re-introduce a thoroughgoing political history perspective on the question of violence. Specifically, for instance, in the case of IS, what is missed by such readings is the central notion that the Islamic State functions inherently at multiple levels, and that therefore the security lens can only inform on one aspect. The pluriversal, hybrid and forward-moving radical project of the Islamic State as a twenty-first century tech-savvy producer of post-modern globalised violence cannot be accounted for by zombie explanations that proceed merely from the hermetic sheet anchors of Orientalism and securitisation. It is time to decouple the respective yet related history of ISIS and of Al Qaeda from the security and securitisation narrative they have been captive to. Relocating those histories in a context beyond these tested confines is no easy task so entrenched that narrative has become internationally. Such intellectually-disobedient rupture can however help establish a richer genealogy of the non-state armed groups currently projecting themselves beyond states, 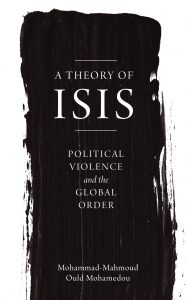 borders and societies and redefining the nature and meaning of contemporary violence.

Mohammad-Mahmoud Ould Mohamedou is Professor of International History at the Graduate Institute of International and Development Studies in Geneva, and teaches at the doctoral school at Sciences Po Paris. Previously the Associate Director of the Harvard University Programme on Humanitarian Policy and Conflict Research, he is the author of Understanding Al Qaeda (Pluto, 2011).

A Theory of ISIS: Political Violence and the Transformation of the Global Order is available to buy from Pluto Press.