What does it mean for Rhodes to fall?

by Dalia Gebrial
BUY THE BOOK

‘The teaching of history in schools has to re-read the history of empire, not as some dangling appendage, which you either can or cannot know about, but as something that is deep at the heart of British identity.’ – Stuart Hall

There is a considerable gap in Britain’s public knowledge of its modern history. Indeed, the curiosity that was cultivated in the Rhodes Must Fall Oxford campaign – albeit incredibly fraught to say the least – led to a crucial development in this conversation. For the first time in my lifetime, heated discussions around the significance and details of the British Empire were drawn out into several weeks of front-page headlines and filled hours of broadcast media. However, most interestingly, data collected the year before concerning how British people understand and relate to the British Empire regained relevance. Some subsidiary questions in a YouGov poll about the 2014 Commonwealth Games revealed that 59 percent of British adults (aged 18–60+) view the Empire as ‘more something to be proud of ’, with just 19 percent considering it ‘more something to be ashamed of ’. Forty-nine percent of surveyed adults viewed countries colonised by Britain as being ‘better off for being colonized’ and just 45 percent could categorically say they would not like Britain to still have an Empire. Indeed, that this has not been the subject of a more extensive qualitative study, and that it was not considered news upon its initial publication, is testament to the level of importance typically given to such information. 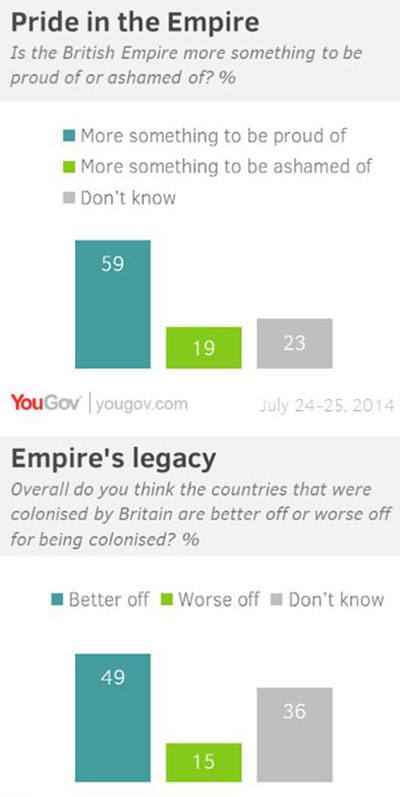 This perception of Empire through either rose-tinted glasses – or through indifference – has several root causes; from the representation of Empire in mainstream culture (or lack thereof), to the general stigmatisation of discussing Empire in public – and particularly in public political discourse. What happens as a result is the preservation of a particular notion of both Britain’s present, and of global North–South relations. The education system, from primary to higher, is a key player in what Michel Rolph-Trouillot calls ‘the production of history’. Indeed, as Rolph-Trouillot points out, in Europe and the US, the public’s sense of what history is remains influenced by positivist tendencies, whereby the role of the historian is to simply ‘reveal’ facts about pasts that are worth revealing, in a process removed from power. This epistemological insistence on history as a positivist endeavour functions as a useful tool of coloniality in the institution, as it effaces the power relations that underpin what the ‘production of history’ has thus far looked like. Indeed, the question of who decides what is important to whom is profoundly unfamiliar. The final educational ‘product’ – the curriculum – appears in a self-justifying manner, and the processes of its construction are concealed. As such, the issue of coloniality in education is not just a question for researchers – it has ramifications far beyond educational institutions. Indeed, what happens in the institution feeds back to establish a particular notion of ‘objective’ historical fact, which has profound consequences for perceptions of the nation’s past and its present.

Seeing how this has taken shape in the historical context of education policy in the UK, the English National Curriculum, in particular, presents a fine case study as to why such questions around the production of ‘common’ knowledge – and particularly ‘common’ historical knowledge – are important. From the ideological inception of a national ‘core’ curriculum in the mid-1980s, struggle over what it included and why has been rife; and nowhere was the debate more heated and fraught than in the history syllabus. Indeed, education scholars describe the struggles around what they call the ‘great history debate’ as ‘nothing less than a public and vibrant debate over the national soul’. Gavin Baldwin too identifies that ‘the National Curriculum codifies the knowledge, skills and attitudes which “the nation” holds to be important, or more likely it is decided by a few that these values are good for “the nation” whatever that might be’. Within this, the ‘ferocity’ of debates around what a National History Curriculum must include, demonstrates ‘the strength of the belief that the History Curriculum could reinforce a sense of national identity’; in other words, there is of course an intimate connection between national identity and collective historical remembering (and forgetting). As it currently stands, a British student can study history to A-level standard, without gaining more than a lesson’s worth of time studying Empire.

The statue of Cecil Rhodes on the facade of Oriel College.

Given this context, it is unsurprising that attempts to subvert or question conventional teachings of history – particularly of British history – are met with such defensive fervour. Tabloid and mid-market newspaper columns have long been racked with anxiety that ‘children in state schools have been taught to be ashamed of our history’, an anxiety explicitly connected to the idea that Britain’s Empire – ‘one of the greatest, most benign empires the world has ever known’ – is being ‘denigrated’ in the National Curriculum. When discussions around curriculum content resurfaced in 2013, there was specific focus around reworking the English literature and history syllabuses to include even greater emphasis on a particular kind of ‘British’ history and ‘English’ literature. The history proposals – which were eventually scrapped following a considerable counter-reaction from scholars – looked to shift the tone of the already minimal teaching of ‘Britain and her empire’ away from a ‘negative and anti-British’ slant, and free it from the burden of ‘post-colonial guilt’. Indeed, it is particularly interesting that a recurring motif in the commentary around RMFO’s statue demand, was that ‘history’ must be protected from those who wish to ‘erase’ it or ‘tear it down’; to interrogate the statue’s presence was to threaten, somehow, ‘history’ itself.

Map of the world c.1900, territories under occupation by the British empire marked in pink.

Here, ‘history’ is not the ongoing and deeply contested process of narrative building around the past; a process over which the present has agency, and which is often – in its most mainstream form – shaped in the image of dominant ideological frameworks. Rather, ‘history’ is fixed, unquestionable and precious because it preserves a particular reading of the past, which reinforces a particular understanding of the present; like the statue, its objectivity rises above the emotional, hand-wringing rabble, who are declared intellectually unfit to participate in the process of its production. What this demonstrates so clearly, is that the construction of a curriculum at any education level is the product of a power struggle; however, it is not perceived as such. Rather, it appears as a ‘natural’ process, in which disciplinary canons and narrative framings come into being through apolitical, ‘rational’ means that do not themselves need to be scrutinised; indeed, the very claim to apolitical greatness is itself the defining feature of the canon.

It was this assumption that RMFO threw into question. It asked: what is omitted from curricula in all disciplines, and what does this tell us about the purpose of education as we see it? Any curriculum must, by definition, exclude – the question is what is excluded and why, and whether the purpose of our education system should be to perpetuate existing power structures and norms, or equip students with the critical tools to question them. Furthermore, RMFO made connections between these knowledge gaps, and the structural, material inequalities they engender both within the academy and, most importantly, beyond the academy. As this volume will elaborate, these interrogations are not just relevant in history departments – although their importance comes to light with particular starkness here. The significance of Empire in shaping institutions of knowledge production and disciplinary canons spans the entire academy; every discipline carries with it colonial modalities of thinking that have eluded adequate scrutiny.

Dalia Gebrial is a PhD candidate at LSE, University of London, editor at Novara Media and the editor of a special issue of the Historical Materialism journal on identity politics.