by Luke Sinwell
BUY THE BOOK

Luke Sinwell went to a small mining town in Marikana to understand the massacre of thirty-four black mineworkers who were gunned down by police on 16 August 2012, nearly twenty years into the post-apartheid South African period. He observed the sociological dynamics of the massacre from the perspective of the mineworkers and developed relationships with the heroic figures who led the longest strike in South African mining history, and thereby changed the course of the country’s politics. Today, for the four year commemoration of the massacre, he reflects on what it was like doing ethnography during this tumultuous period and what makes his new book The Spirit of Marikana so unique.

I first went to the Rustenburg platinum belt, and more specifically Marikana, on 18 August 2012 – 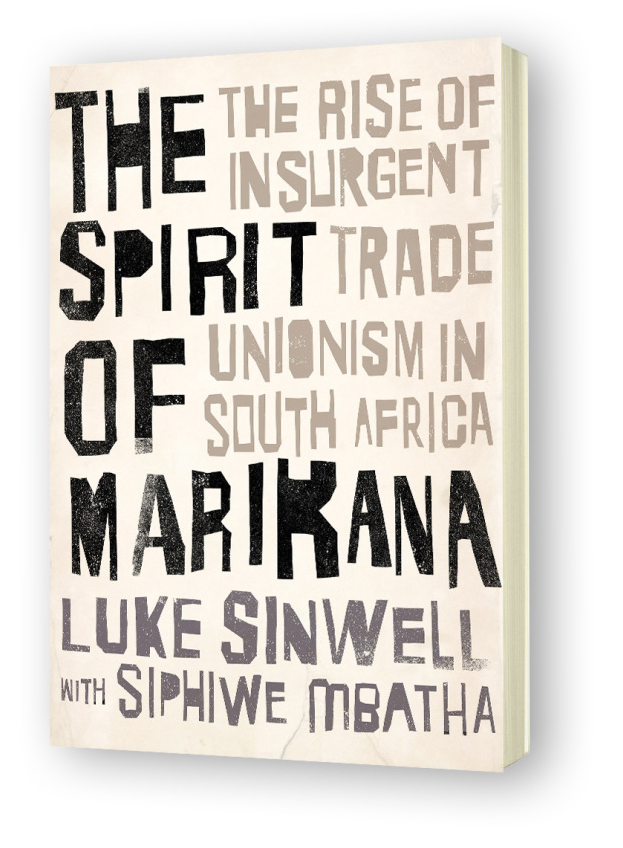 two days following the massacre. The mineworkers were still on strike. They had decided to continue the strike so that their colleagues would not have died in vain. Before leaving, I recall being asked whether it was wise to go to Marikana in the midst of the ongoing violence. I responded that it was my right to go, and that if the workers told me to leave, I would do so. If the police forced me to exit the area where I was stationed to do research, then I would comply. As it turned out, the police never did, neither did the workers (though there were certain instances whereby we were clearly not welcome). Over time, I built strong relationships with key leaders who remained committed and even ready to die for the economic freedom and dignity of mineworkers. This is indeed the most significant quality of my research, and these relationships lie at the heart of the book The Spirit of Marikana.

As I arrived in Marikana it was unclear even to the most diligent activists and scholars what had actually transpired during the strike at Lonmin, Marikana. Thapelo Lekgowa and I had been tasked by the South African Research Chair in Social Change at the University of Johannesburg (where I was based) with undertaking ‘quick-response’ academic research on the biographies of the thirty-four men who had died. Television images at the time (and to some degree since) portrayed the mineworkers as bloodthirsty and violent savages. We wanted to humanise the workers by describing who they actually were: their circumstances, personalities and the realities of life in their (mostly rural) homes of origin. In late August 2012, Thapelo and I met the workers’ committee below the mountain in Marikana. The men were still on strike.  After extensive discussions with key leaders, we were given details of funerals in the rural areas. Thapelo and I visited people’s homes and joined the families in their grief. This, I believe, has had a lasting effect on both of us. Soon afterwards, City Press coordinated groups of journalists to take photos of the dead men, and to write short biographies of them. We decided it was unnecessary to duplicate this work, and that we should not make researching the mine workers’ families our central task.

By this time, others at our research unit had already begun to provide a critical and alternative view to the dominant narrative promoted by the media. They revealed that the workers had not been charging at the police, as was claimed, but were running away, having been shot in the back or the back of the head.

In order to understand these extreme actions, I decided that it would be most useful to place the moment of the massacre in its historical context. This meant chronologically tracing the events of the days and weeks (and eventually months and years) preceding the actual day of the massacre, from the perspective of the workers who had survived. In the meantime, I proceeded with a group of researchers, Thapelo Lekgowa, Botsang Mmope and Bongani Xezwi, among others, to record the voices of mineworkers without probing the precise forms of organisation that were created by them in order to forge a social movement. Our preliminary findings were reported at length in an edited collection with Peter Alexander entitled, Marikana: A View from the Mountain and a Case to Answer.

The Spirit of Marikana is an extension of this. I spent the next two years undertaking in-depth research with an activist who arrived in Marikana the day after the massacre, while mineworkers were still on strike. A coordinator of a socialist civic organisation called the Thembelihle Crisis Committee (TCC), Siphiwe Mbatha was providing much-needed solidarity to workers as a working class leader in his community. He also proved to be an exceptional researcher with a seemingly natural skill of building relationships of trust with mineworkers, some of which have lasted nearly four years.

Like any good ethnographer, we needed to be patient and on many days we waited hours to speak, or simply to spend time with people. Our intention was not only to collect archives, conduct in-depth interviews and then simply report our findings to an academic audience. We spent as much time as possible with mineworkers in their own social settings: cooking together, eating, driving, having informal conversations, listening to speeches at mass meetings and, in the most trying of times, visiting leading mineworkers while they were in jail (on trumped up charges of public violence). For a brief period in 2013, we lived with one of the key activists, Bheki Buthelezi, in his spare room in Siraleng, a mining community just outside of Khuseleka, Amplats which was also central in the strike-wave related to the massacre. During the great 2014 strike, the longest in South African mining history, we played a role in organising in an attempt to extend the strength of the workers through the Democratic Left Front (DLF) and the Gauteng Strike Support Committee (GSSC).

While in the field we were mostly unaware of the fact that we were challenging traditional approaches to social science that create a stark divide between the researchers and researched. Shadowing Michael Burawoy’s distinctive approach, this book is a product of the extent to which we believe that we ‘share a common world’ with those that we study. With leaders being killed throughout much of 2013, these were particularly difficult circumstances that no academic text on methodology could have prepared us for. Siphiwe and I thought that it was necessary to record the history of this movement, lest it be lost completely. We did not want Marikana and the events surrounding it to be forgotten. Most importantly, we sought to challenge the dominant perspective that Marikana need only be understood as a sad story of police repression and killings. Our book tells the original and hidden story of the heroic figures at the three largest platinum mining companies in the world who were prepared to die for their cause.’

Luke Sinwell is a Senior Researcher at the University of Johannesburg. He is co-author of Marikana: A View from the Mountain and a Case to Answer. He is also co-editor of Contesting Transformation: Popular Resistance in Twenty-First-Century South Africa and the author of numerous articles on participatory democracy and contentious politics in South Africa.

Siphiwe Mbatha is a co-ordinator of the Thembelihle Crisis Committee, a socialist civic organisation in South Africa which fights for basic services for all. He is also an assistant researcher at the University of Johannesburg.

The Spirit of Marikana: The Rise of Insurgent Trade Unionism in South Africa is available from Pluto Press.