Student Rebellions Past and Present

by Matt Myers
BUY THE BOOK

To coincide with the publication of  Student Revolt, an oral history of the Millbank Generation, we’ll be publishing a series of blogs looking at the legacies and lessons learned from 2010 and other student movements. In this blog, Matt Myers, author of Student Revolt, charts the history of student protests, from early rancour in medieval Bologna, to worker-student coalitions in 1926, all the way to the storming of Millbank in 2010 and its repercussions today.

Student protest has a long history in Britain. From solidarity with anti-imperialist struggles to fighting tuition fees, grant-cuts and rent-rises, student movements have fundamentally shaped British society. As the turnover of student generations has accelerated, these memories have become lost.

Student protests began in the first universities. Medieval European university records show students organising against poor food, lodgings, and teaching. The University of Bologna in Medieval Italy faced the first lecture boycotts in history against poor teaching quality. Fast forward to the start of the 19th century, London’s medical students were fighting for new curriculum changes and demanding better standards of teaching. However, student movements have not always been progressive. The most severe disputes in medieval universities were not with the university or the state but with the townspeople: the infamous ‘town and gown’ problem. During the 1926 General Strike, university students, along with ex-colonial civil servants and military personnel, conspired against strikers, volunteering to act as strike breakers.

Up until the mid-20th century, the vast majority of university students came from elite backgrounds. After 1945, there was a massive expansion in student numbers to meet the economy’s growing demand for a more educated workforce. In 1939, there were just 50,000 students in higher education, having increased from around 7,500 in 1902. A new mass service sector required different forms of education – especially generalised information processing and comprehension skills, and definite vocational qualifications in sciences and engineering. It was the arrival of this new cohort of educated young people that fundamentally changed the political character of the student body.

The 1960s marked the entry of young people as a distinct social, cultural, and political group onto the stage of British national life. The first stirrings of the new movements can be found in the active participation of students in movements of solidarity and peace. In 1962, up to 90% of the participants in the Campaign for Nuclear Disarmament (CND) Aldermaston march were young. Movements formed to fight the Vietnam war and to show solidarity with the Palestinian struggle for national self-determination. Students fought South African apartheid, decades before any major political party took the issue seriously. Students targeted South African sports teams, achieving success mobilising against their (segregated) rugby team in 1974. By the end of the 1970s, eighteen universities had withdrawn their financial investments in South Africa. Student movements of the past refused to accept the dichotomy between ‘student’ issues and ‘non-student’ issues. What was unjust in society and the world was unjust for students as well.

Like today, students and young people were assertive of their own interests. In March 1973, an estimated 400,000 students held marches, pickets, and canteen boycotts in a movement in defense of grants. More than forty universities and colleges took part in rent strikes during the 1970s. Students at Essex and Warwick in 1970 and 1973 discovered files showing that the university had been systematically spying on their student’s political activities, spurring mass protests and major occupations. In 1973 students fought for crèche facilities, nurseries, contraception and abortion on demand, and equal pay for women. At its 1972 conference, the NUS passed a motion stating: ‘Conference recognises that the oppression faced by women in British society cannot be seen in isolation from the capitalist system’. British students and their movements have often found themselves on the right side of history.

The first experience of politics can profoundly affect student activists, but does not guarantee future commitment to progressive politics. Jack Straw, NUS President during one of the organisations most radical phases in the late 1960s, became the Labour Home Secretary responsible for policing student demonstrations against tuition fees in 1998. David Triesman – who became political through Youth CND and would become a student leader at Essex University in 1968 – would go on to become Lord Triesman and the General Secretary of the Labour Party (2001-2003). In France, former Maoist 68’er André Glucksmann became a prominent supporter of Nicolas Sarkozy, while Bernard Kouchner became Minister for Foreign Affairs under the latter’s presidency. Daniel Cohn Bendit, a leading figure in May 1968, became a Green MEP and wrote a booked titled ‘Forget ’68’. The rise of neoliberalism in the 1980s spurred a decline in the size and radicalism of student movements. Many were left demoralised and campuses became less politicised.

This was to change in 2010. The last great student revolt occurred in response to the UK Coalition government’s threefold increase in tuition fees and cuts to a weekly grant for college students. Although the fee rise passed, the movement paved the way for future breakthroughs. It helped to decimate Liberal Democrat support at the 2015 General Election and politicised a generation. Many of this ‘austerity generation’ went on to play key roles in the Corbyn project.

Young people were central to Labour’s election result on 8 June 2017. Some polls have suggested two thirds of young voters backed Corbyn.[1] A surge in youth voter registration dominated the headlines. This burgeoning political consciousness can be traced back to the student movement of 2010 – the largest and most radical student movement for since the 1970s. In 2010, young people chose to be the subjects of their political fate by taking to the streets; in 2017, they took to the ballot box. In both 2010 and the recent general election, the austerity generation was made not as a victim of unjust policies, but in resistance to them. The struggle for young people back in 2010, as today, is over who should pay for the economic crisis: the many or the few. The success of the Labour Party at the general election shows how powerful a force this new political subject can be.

The announcement that a Labour government will abolish tuition fees and restore college grants starting from Autumn 2017 did not emerge from nowhere. The policy is the culmination of years of collective work by a whole generation of young people in Britain and stands in the tradition of decades of student movements. Labour’s policy would not have been possible without the movement they created. To understand these great changes, we need to acknowledge both the role played by the 2010 student movement as well as Britain’s long and proud traditions of student protest. 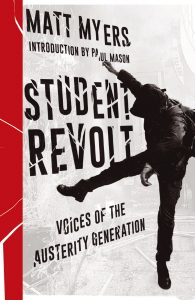 Matt Myers is a doctoral student at the University of Oxford. He was a participant in the 2010 student movement

Student Revolt: Voices from the Austerity Generation by Matt Myers is available to buy from Pluto Press and is published in partnership with the Left Book Club.