by Patrick O'Brien
BUY THE BOOK

On 24th November 2010, the second demonstration against cuts took place and thousands of students took to the streets to protest against rising tuition fees and defy government cuts. Patrick O’Brien was there to photograph the protesters, who were ‘kettled’ in Parliament Square and on Whitehall.

To coincide with the publication of  Student Revolt, an oral history of the Millbank Generation, we’ll be publishing a series of blogs looking at the legacies and lessons learned from 2010 and other student movements.

I remember everyone talking about the student university fees rocketing up just after the General Election in 2010, just after I had left university. It came to a head around late November and early December 2010, at the time there was a lot of media attention as well as on social media. You could feel something was going to happen in the days beforehand, so I stockpiled on film and checked where people were meeting to start the protest. I thought to myself, if these protests are anything like the Poll Tax Riots in 1990 then it’ll be worth photographing. I didn’t really see myself as a protester, but more as a silent observer. The thing I remember most about the protests I attended was that it was bitterly cold, unpleasantly so. No amount of warm clothing could have prepared me for how cold it actually got, especially when you have been kept kettled for hours on end. It was a nightmare loading film and I couldn’t feel my fingers. Photographers were only allowed to leave if they had a press card, I wished I had one. All the protests began peacefully, you could feel the camaraderie in the air as everyone was fighting for the same cause.

Things went sour when individuals were arrested or the protesters were hemmed in. If it wasn’t tied to the ground it was used as a projectile, this included some of the Stop the War protester’s tents and 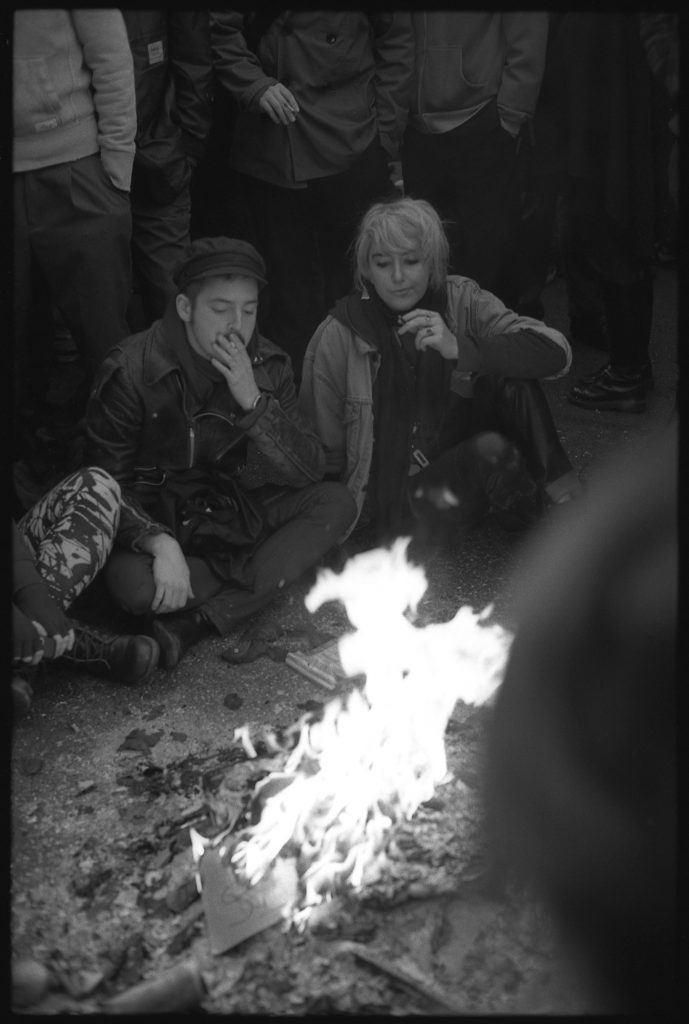 belongings. At times it was dangerous, more dangerous than the projectiles were the crowd surges. I was unfortunate enough to find myself near the front of the crowd on the 24 Nov, 5-6 lines back, groups of people started surging pushing everyone else towards the line of riot police. I saw lots of people on the front row holding their hands up to avoid being hit by truncheons and apologising and blaming the people behind. Lots of people were screaming in fear and pain. Here, again, I remember looking behind me and seeing groups of people pushing others forward, it was like a wave machine. Both protests were violent, seeing people with blood pouring down their faces and other injuries was not uncommon.

At the end of the day people came out to protest for their liberty and even though unsuccessful with keeping the tuition cap in place, the protesters showed they had a voice and that it would be heard.

Patrick O’Brien was born in Cork, Ireland in 1989 and moved to the UK when he was three. He studied photography at Thames Valley University. Patrick always has had an interest in film photography and the physicality of film. Patrick is still a keen photographer and develops all his own films, he is always on the lookout for the next project.

Student Revolt: Voices from the Austerity Generation is available to buy from Pluto Press.

All photos belong to Patrick O’Brien, please do not use without the author’s permission.