Violence in the Pacific: The impact of the US military in South Korea

by Elisabeth Schober
BUY THE BOOK

Elisabeth Schober, author of Base Encounters: The US Armed Forces in South Korea, is conducted anthropological fieldwork in South Korea, she sends us this dispatch, exploring the effects of violence, sexual or otherwise, that occurs around the extensive network of US military bases in the region.

The Korean peninsula has made it into international news again. Once Kim Jong Un’s regime 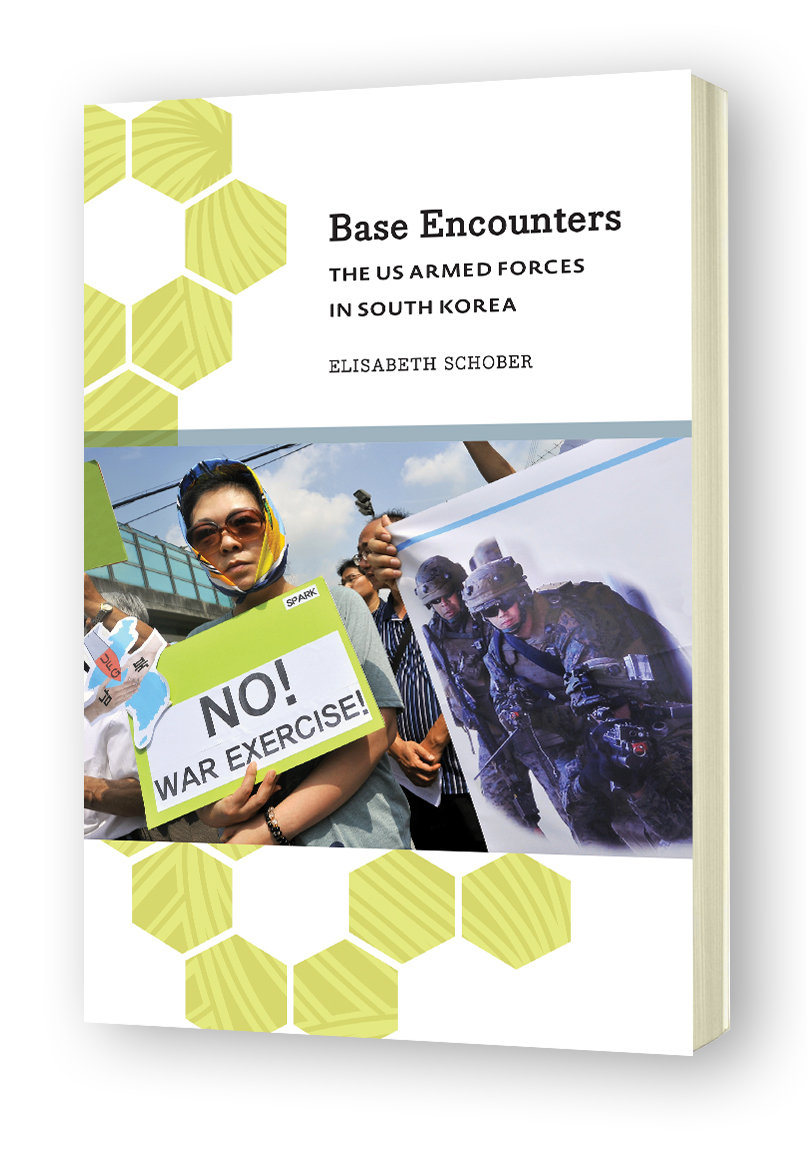 threatened to destroy Manhattan with a hydrogen bomb on March 13 of this year, the annual Western media ritual of shining a brief light onto the complex and long-standing conflict between North and South Korea has fully kicked into gear. In early April, North Koreans added fuel to the fire by releasing another propaganda video, this time showing an attack on South Korea’s capital Seoul. A North Korean assault targeting US soil is a most improbable scenario, given the country’s absence of long-range missile capabilities. Strikes against the mega-city of Seoul, however, are within the realm of the highly unlikely, yet technically possible, events: the capital of South Korea, home to some 25 million people within its larger metropolitan area, is less than 60 kilometers away from the border with North Korea, thus well within reach of its opponent’s missiles.

Without fail, every year it is early spring that turns out to be prime time for such threats of annihilation and destruction coming from Pyongyang against Seoul and its Unites States allies. One of the reasons behind the timing of such war-crazed rhetoric from the North is at times overlooked: the annual joint military drills involving US and South Korean troops. This year’s exercises began on March 7 and will continue until the end of April, and with 300,000 Koreans joining 17,000 US military personnel, the ongoing drills are said to be the largest ever held. And while these megalomaniac displays of military might are certainly a reaction to nuclear and other missile tests conducted by the belligerent Democratic Republic of Korea on a semi-regular basis, they are also a key component of what US president Barrack Obama has termed the ‘pivot to Asia’: that is, the ongoing large-scale ‘rebalancing’ of US political and military interests away from the Middle East and toward the Asia-Pacific region, where China’s military rise is now to be held in check. This April, for instance, also sees an additional 10,000 Philippine and US troops joining forces in the annually held Balikatan-exercises on the Philippine archipelago. And last month, the U.S., India and Japan have also announced that they will hold joint naval drills in the South China Sea in the near future – a strategic area that, together with the Korean peninsula, is increasingly becoming a hotspot for the ongoing struggles over military hegemony in the larger region.

Amidst these power re-calibrations involving the United State and China, South Koreans find themselves in a rather exposed position today; an uncertain situation which not only stems from the aforementioned North Korean regime’s military capacities, but also from the drastically changed economic realities the country finds itself in. While in the old the days, the Republic of Korea used to heavily depend on financial, military and political support from the United States, in the meantime South Koreans have themselves experienced exceptional economic growth. And today, rather than the United States, it is China that is South Korea’s number one  trade partner, which has made the long-standing military alliance between South Korea and the USA an inconvenient factor to negotiate around. Western observers may be excused to solely focus on the infamous sabre-rattling of the North Korean regime in their reporting on Korean issues, given the often-bizarre rhetoric used in Pyongyang. But a closer look at the turbulent history of South Korea and the pivotal (and at times highly controversial) role that the USA has played in the history and fate of this country, may reveal a number of nuances, contradictions and unlikely fractures to the seemingly homogenous picture that is usually painted of the long-standing Korean conflict.

In Base Encounters, I have tried to do as much by focusing on a curious phenomenon: that US military personnel, approximately 30,000 of whom are stationed in a number of permanent US bases scattered across South Korea, have on occasion been the cause of much outrage amongst the citizens of the Americans’ key ally. Over the last few decades, crimes committed in the GI entertainment areas nearby US bases have at times been amplified by an outraged public as both a symbol for—and a symptom of—the uneven relationship between the United States and the small East Asian nation.

When in 1992, for instance, a South Korean sex worker named Yun Keum-i was brutally murdered by US soldier Kenneth Markle in the town of Dongducheon, tens of thousands of Koreans joined protests against the long-term stationing of US troops in their country. The incident also turned a long-standing issue – that of prostitution primarily involving GI clients nearby their military installations – into a matter of public debate; an issue that would now be widely discussed during a time when South Korea was transitioning towards democracy after many decades of US-backed military rule. Amidst a US realpolitik that involved backing repressive violent regimes in South Korea at the cost of democratisation, US soldiers were not exactly model ambassadors on the ground, which to many Koreans worsened the unease caused by their country’s long-term subordination to US interests.

Additionally actors from the left, I was to find, have strategically utilised negative images of US soldiers as a counter-hegemonic discourse and a popular frame since then. And by employing the rather popular violent imaginaries that the fractious and at times deadly encounters between US troops and Korean civilians have given rise to, left-wing forces in South Korea have used both a nationalist frame and have managed to tap into a transnational movement against the presence of the US Armed Forces in the Asia-Pacific region.

To be sure, the long-term encounter of the military representatives of the Unites States with local actors in other places such as Japan, the Philippines, or Guam has also been riddled with contradictions, where at times small-scale violent events have similarly triggered much larger discussions. In March of this year, for instance, a US serviceman was arrested for the rape of a local woman in on the Japanese island of Okinawa, prompting thousands of concerned citizens to protest against US bases in Japan. In the Philippines, too, instances of gender-based violence that involved US military personnel have been utilised by political forces in their local anti-US military struggle. Recently, the murder of Jennifer Laude, a 26-year old transwoman who was killed by 19-year old US sailor Joseph Scott Pemberton in Subic Bay in October 2014, has sparked much debate over the growing re-involvement of the US military on Philippine soil. With such crime victims time and again being recast as symbols for their nations by actors of the left, the bodily images used to discuss these countries’ roles as hosts to the US’ ‘bases of empire’ (Catherine Lutz) have proven to be very easy to think and act with during times of political upheaval.

Korean contestations over US bases in the country are perhaps unique in that the agreement between the USA and the ROK has long historical reasons, is seemingly open ended, and directly involves a number of urban terrains that are (in)conveniently located within reach of US military posts. The long-term stationing of United States forces in South Korea, which entails a continuous flow of predominantly young men sent to the country for typically short postings, has triggered many acrimonious sentiments over time, affecting ever new generations and urban spaces in the capital area of the country. The day-to-day experiences of soldiers, sex workers, activists and other actors brought about by the highly charged rendezvous between civilian entertainment spaces in Seoul and the American military is a main focus of Base Encounters.

Anthropologist Sherry B. Ortner once noted that regardless of the intentions, motifs and aspirations of the people we follow around, actual social change at our field sites may often turn out to be ‘largely a by-product, an unintended consequence of action, however rational action may have been’. The large-scale contestations over US bases in South Korea, in spite of their clear political directionalities and at times massive support, have not (yet) attained the one goal that was central to all these efforts; that is, the closure of US posts in the country. At the same time, these political struggles have produced a myriad of unintended consequences whenever they ‘hit the ground’ in particular neighborhoods in and near Seoul. South Korean changes in attitude toward the representatives of the world’s most powerful military in the world, I believe, can only be grasped in their multi-dimensionality by taking both a close look at transformations at the national, regional and global order, and by simultaneously looking at how such changes reverberate in mundane zones of everyday contact. The much contested case of the Korean peninsula is also the story of on-the-ground, small-scale changes that mirror, complicate and feed back into the tectonic power shifts we are witnessing these days.

Elisabeth Schober is a Postdoctoral Fellow at the Department of Social Anthropology at the University of Oslo, where she is affiliated with the Overheating project. She is the author of Identity Destabilised (Pluto, 2016).

Base Encounters: The US Armed Forces in South Korea by Elisabeth Schober is available to buy from Pluto Press.