The Meaning of October 1917

by Neil Faulkner
BUY THE BOOK

When Georges Lefebvre wrote his history of the French Revolution, he covered the entire period from 1789 to 1799 – that is, from the Storming of the Bastille to Napoleon Bonaparte’s 18th Brumaire coup. The chronology might, in fact, be extended further, until 1814/15, since, in a very real sense, Napoleon represented the defence and the spread of the bourgeois revolution by military means. The revolutionary epoch only came to a definitive close at Waterloo.

Three distinct periods can be identified. The revolution was in the ascendant until ‘Year II’ and the establishment of the Jacobin dictatorship (1793-94). It was in retreat following the overthrow of Robespierre and the Committee of Public Safety in the 9th Thermidor coup and the subsequent establishment of the Directory (1795-99). It was then ‘fossilised’ under the rule of a military strongman – the original ‘Bonapartist’ – from 1799 to 1814/15.

Something similar might be said of the English Revolution. Its period of ascent culminated in Pride’s Purge, the trial and execution of Charles I, and the establishment of Army rule in the crisis of winter 1648/49. It then descended following the smashing of Leveller mutinies in spring 1649, and, when attempts to re-establish Parliamentary rule proved abortive, the strongman stepped in, with Cromwell becoming ‘Lord Protector of the Commonwealth’ in 1653. The revolutionary epoch, which had opened in 1640, did not really conclude until 1660.

In both of these great bourgeois revolutions, the experience of war was seminal. Counter-revolutionary war radicalised France in 1792-94 and England in 1648. Both the Jacobins and the Cromwellians were forced to reject compromise, mobilise popular forces, and enact emergency measures. The protracted and convoluted history of both revolutions was interwoven with the experience of war and a perception of mortal danger.

At first sight, the Russian Revolution appears quite different. In traditional accounts, the entire revolutionary process plays out in just eight months – between February and October 1917. Trotsky’s classic history has chiselled this framework into stone. A three-volume masterpiece, it divides the revolution into three phases: the February Revolution and the overthrow of Tsarism; the attempted counter-revolution of July/August 1917; and the October Revolution.

October becomes the earth-shaking climax of an immense eruption of elemental social forces from Russia’s depths. Red October becomes a sacred historical consummation. That which follows cannot but be anti-climax.

The contradictions of October

But in fact the revolutionary process had barely begun. And the grim truth is this: the workers state established by October – the most advanced political form in the world at the time – was resting on socio-economic foundations which made it an unsustainable aberration.

Lenin and Trotsky, the two principal leaders of the revolution, knew this. They knew that Russia’s small working class could maintain power only with the support of the people as a whole, that is, with the peasantry. And they knew that, because of Russia’s extreme economic backwardness, because of the poverty of Russian society, the workers state could endure, and the transition to socialism be made, only on the condition that the revolution spread to the advanced centres of European capitalism.

But the alliance with the peasants began to break down immediately. The economy had been pole-axed by Russia’s three years of war and revolution between 1914 and 1917. It was pole-axed again by a further three years of war against counter-revolutionary and foreign-interventionist armies (1918-21). By one estimate, Russian industrial output was down to about 15% of its 1914 level by the end of the Civil War.

This meant the towns had nothing to trade with the countryside. Not only was far less produced, but everything was needed for revolutionary defence – as the Red Army swelled to a force millions-strong. The peasants had supported the Bolsheviks because they wanted the land. Once they had it, they resisted the forced requisitioning of both the Red and the White armies, and when the Civil War ended, they hoarded their grain and concealed their stock, desperately clinging to the little they had, making nonsense of heady visions of ‘socialist transformation’.

The towns, starved of food and raw materials, struggled to recover. Economic growth, even after 1921, was painfully slow. The wider context, of course, was the failure of the world revolution, which had surged from 1917 until 1920, and then crashed back in a succession of defeats and finally ebbed away by the end of 1923. Isolated and impoverished, the revolutionary regime was transformed by the experience of civil war, economic collapse, peasant resistance, and the crushing deadweight of Russia’s chronic backwardness.

This played out in a succession of crises and debates inside the revolutionary regime. The contradictions eventually destroyed it. In the ascendant from February 1917 to the winter of 1917/18, perhaps even to the summer of 1918, the revolution thereafter was in retreat, becoming more centralised, more bureaucratic, more authoritarian.

The milestones on this road – the 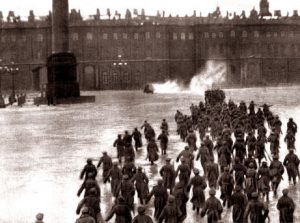 dissolution of the Constituent Assembly, the breakdown of the revolutionary coalition with the Left SRs, the establishment of the Cheka (the security police), the banning of factions inside the party, the suppression of the Kronstadt revolt, the elevation of the party secretariat, and so on – are as much a part of the revolutionary process as the great events of 1917.

But note a critical contrast with the experience of the French and the English Revolutions. The Civil War, instead of radicalising the revolution, had the opposite effect. The Bolsheviks, already in power, were struggling against the odds to maintain a functioning workers state based on mass participatory assemblies (‘soviets’) as the essential socio-economic foundations for this disintegrated beneath them.

Lenin had, of course, foreseen it. Again and again he had argued that the Russian working class was one contingent in the world army of socialist revolution. At the Finland Station in April 1917, in his first speech to the Petrograd workers upon his return to Russia, he had hailed ‘the victorious Russian revolution’ but concluded:

Any day, if not today or tomorrow, the crash of the whole of European imperialism may come. The Russian Revolution, made by you, has begun it and opened a new epoch. Hail the world-wide socialist revolution.

He returned to this theme repeatedly. ‘The final victory of socialism in a single country is … impossible,’ he told the Third Soviet Congress in January 1918. ‘Our contingent of workers and peasants which is upholding Soviet power is one of the contingents of the great world army.’ Two months later, he put the matter more starkly: ‘It is the absolute truth that without a German revolution, we are doomed.’

October was the supreme moment in a revolutionary process which opened in February 1917 and closed in the winter of 1927/28, when the Stalinist party-state bureaucracy destroyed Trotsky’s Left Opposition group to establish an unchallenged counter-revolutionary dictatorship.

To understand the Russian Revolution properly, we need to think of it as a ten-year process, just as Lefebvre conceived the French Revolution.

Neil Faulkner is a leading Marxist historian. A Research Fellow at the University of Bristol, he is the author of numerous books, including A Marxist History of the World: from Neanderthals to Neoliberals (Pluto, 2013) and Lawrence of Arabia’s War (Yale, 2016). He appears regularly on TV and was a lead consultant on Sky Atlantic’s The British series.

A People’s History of the Russian Revolution by Neil Faulkner is published by Pluto Press and the Left Book Club.