The New Cross Massacre:
We Will Never Forget

Extracted from Here to Stay, Here to Fight: A Race Today Anthology (Pluto, 2019)

As 1985 draws to a close and Christmas and the New Year approaches, for some of us, there may be moments of sad reflection as we remember lost loved ones. The relatives of the 13 young blacks who died as a consequence of the suspected racially motivated arson attack on a birthday party at 439 New Cross Road, Deptford come to mind. For them and the survivors of the holocaust – indeed for the black population as a whole – January 18, 1986 will be a most significant date in the new year calendar, marking as it does the fifth anniversary of the New Cross Massacre.

It will be the eternal indictment of the police officers involved that, after nearly five years of ‘investigation’, no one has been charged. The case, as far as the police are concerned, is officially closed. On August 27, four-and-a half years after the fire, New Scotland Yard issued a statement announcing that the Director of Public Prosecutions had ‘decided there was insufficient evidence to charge anyone with any offence’. They gave as a reason for their failure the most facile of excuses: ‘Police cannot force people to talk and the right to silence hampered the persistent efforts of the police to find the truth.’ Anyone familiar with the facts of the fire and the way the police conducted their ‘investigation’ during those four-and-a-half years cannot help but conclude that the police statement was the final cherry on the cake in what the New Cross Massacre Action Committee has always maintained was an elaborate police cover-up:

To begin with, Mrs Amza Ruddock at whose house the party was held and who lost a daughter and son in the fire was told by two police officers that a firebomb caused the fire. Early press reports spoke of an arson attack. Evidence was found by the ground floor front room window of the house consistent with a firebomb attack. Moreover, eyewitness accounts pointed to a firebomb attack on the house. Before the investigation could get on the way, the police suddenly changed track, putting forward the idea that the fire could have started inside the house, ruling out the possibility of a racist attack.

The initial horror and anger of blacks up and down the country soon found organisational expression in the form of the New Cross Massacre Action Committee. The committee turned out to be the greatest mass movement of blacks Britain has ever seen. They adopted the slogans ‘Thirteen Dead And Nothing Said’, ‘End Racist Attacks Now’, ‘We Demand Justice’ and ‘No Police Cover-Up’, ‘Blood Ah Go Run If Justice No Come’ among others. They condemned the silence of official society on the deaths, demanded that the person or persons responsible for the fire be brought to justice and that the government and police do something about racist attacks and murders. A national mobilisation was set in motion for a Black People’s Day of Action to let the government, police, racists, the nation and the world at large know that blacks were not prepared to take racist murders lying down.

The police, rather than concentrating their efforts on finding the arsonist, directed all their efforts at discrediting the New Cross Massacre Action Committee and the mass movement of blacks and began looking for a black scapegoat to charge with starting the fire. At first they arrested four black youths who were at the party and tried to frame them, arguing that the fire resulted from a fight between them. All the witnesses at the party denied that any fight took place at the party and the police were thwarted in their efforts to frame the youths by the New Cross Massacre Action Committee and the parents. In spite of the effort of the police to undermine the Black People’s Day of Action, over 15,000 people from all over the country marched from 439 New Cross Road to Hyde Park on March 2, 1981, six weeks after the fire.

The inquest which followed two months later amounted to a complete travesty of justice. The coroner, a Mr Davis, took no notes throughout the hearing and made no attempt to conceal his bias towards the police line. The police for their part pursued the fight theory and completely obscured the forensic evidence of a firebomb, arguing that the seat of the fire was the centre of the room and not the front window as eyewitnesses had said. The parents and relatives of the dead and injured expressed their outrage and disbelief at the subsequent open verdict of the inquest jury. They immediately went to the High Court to get that verdict overturned and a new inquest. Chief Justice Lane was having none of it. He dismissed the police attempt at framing the youths as irrelevant.

Since the inquest in May 1981 the police, aided and abetted by their friends and agents in Fleet Street, have been engaged in a shameful campaign of disinformation, lies and innuendos in an attempt to confuse the parents of the dead and injured and public alike. They tried to vilify Mrs Ruddock and create divisions and confusion among the parents. Having failed to frame the four black youths with the fire, they then tried to implicate a man named Norman Higgins with a jealous lover motive for causing the fire. They said that they wanted Higgins for questioning but that he had absconded to the USA. Higgins returned and was not arrested, but the damage had already been done. Finally, they tried to hound to madness, Leslie Morris, a key eyewitness whose evidence contradicted the lines the police wanted to pursue.

All has not been negative. The Black People’s Day of Action showed powerfully the ability of the black community to mobilise itself to take action in defence of our rights and our lives and has provided us with an organisational framework for future action. Secondly, the police were prevented from framing blacks for the fire and from making scapegoats out of us. Thirdly, the New Cross Massacre Action Committee succeeded in drawing national and international attention to the alarming increase in racist attacks and fascist murders against blacks and Asians and the police and government’s indifference to them. The parents and relatives of the 13 dead and 26 seriously injured will never forget January 18, 1981. Black people in Britain will not forget the police cover-up. We will not forget the names Commander Stockwell, Sergeant Wilson and Superintendent Bell. We will never forget the New Cross Massacre.

Linton Kwesi Johnson (born 24 August 1952), also known as LKJ, is a Jamaican dub poet and activist who has been based in the United Kingdom since 1963. In 2002 he became the second living poet, and the only black poet, to be published in the Penguin Modern Classics series.

This extract was taken from Here to Stay, Here to Fight: A Race Today Anthology, edited by Paul Field, Robin Bunce, Leila Hassan, Margaret Peacock. From 1973 to 1988, Race Today, the journal of the revolutionary Race Today Collective was at the epicentre of the struggle for racial justice in Britain. Placing race, sex and social class at the core of its analysis, it featured in its articles and pamphlets contributions from some of the leading writers and activists of the time: C. L. R. James, Darcus Howe, Linton Kwesi Johnson, Toni Morrison, Maya Angelou, Walter Rodney, Bobby Sands, Farrukh Dhondy and Mala Sen and many more. Here to Stay, Here to Fight draws together many of these key articles and extracts into an impressive collection. 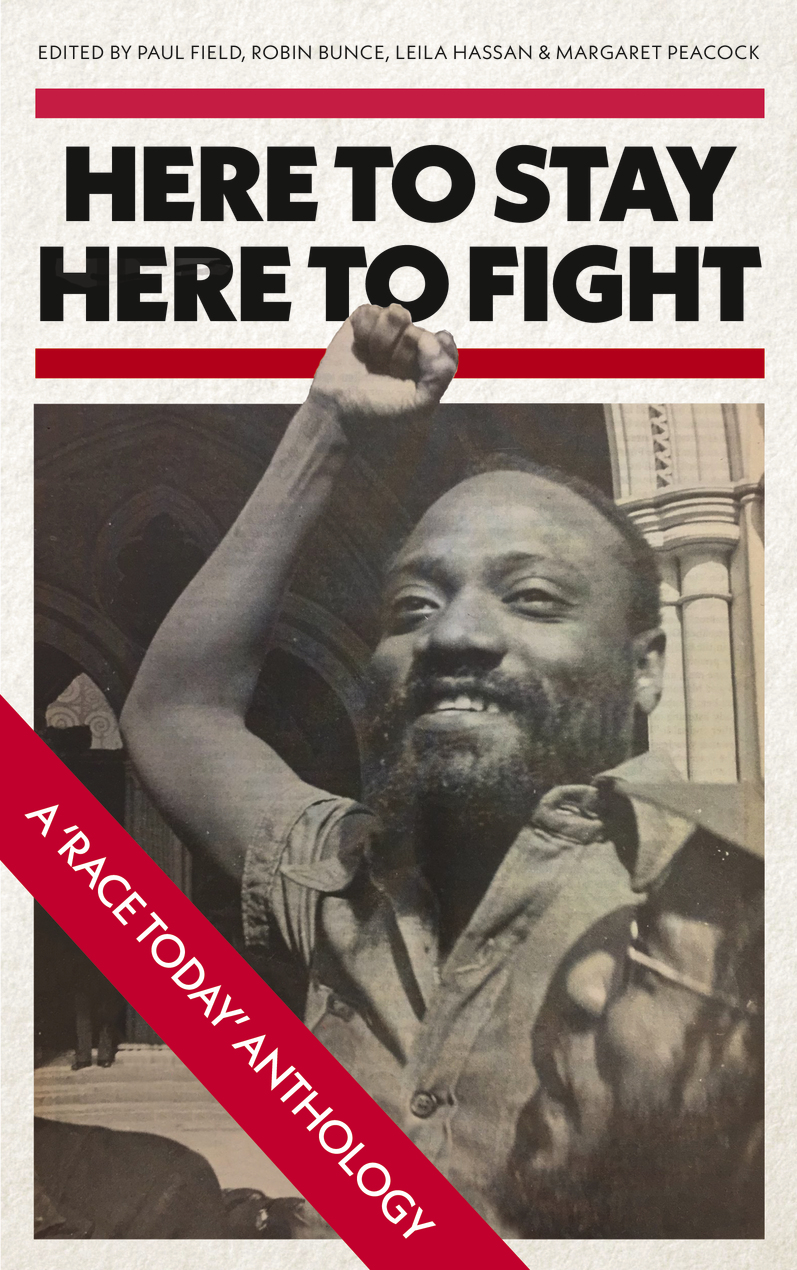