by Bill Mullen
BUY THE BOOK

In this essay, Bill Mullen, author of the W.E.B. DuBois biography Revolutionary Across the Colour Line, considers the historical precedence set by DuBois’ thought. This survey of DuBois’ radicalism (evidenced in his advocating of the redistribution of public wealth, his alignment with Pan Africanism and solidarity with working class movements worldwide) allows us to contextualise the political motivations of the Black Lives coalition network, following the recent publication of their agenda. 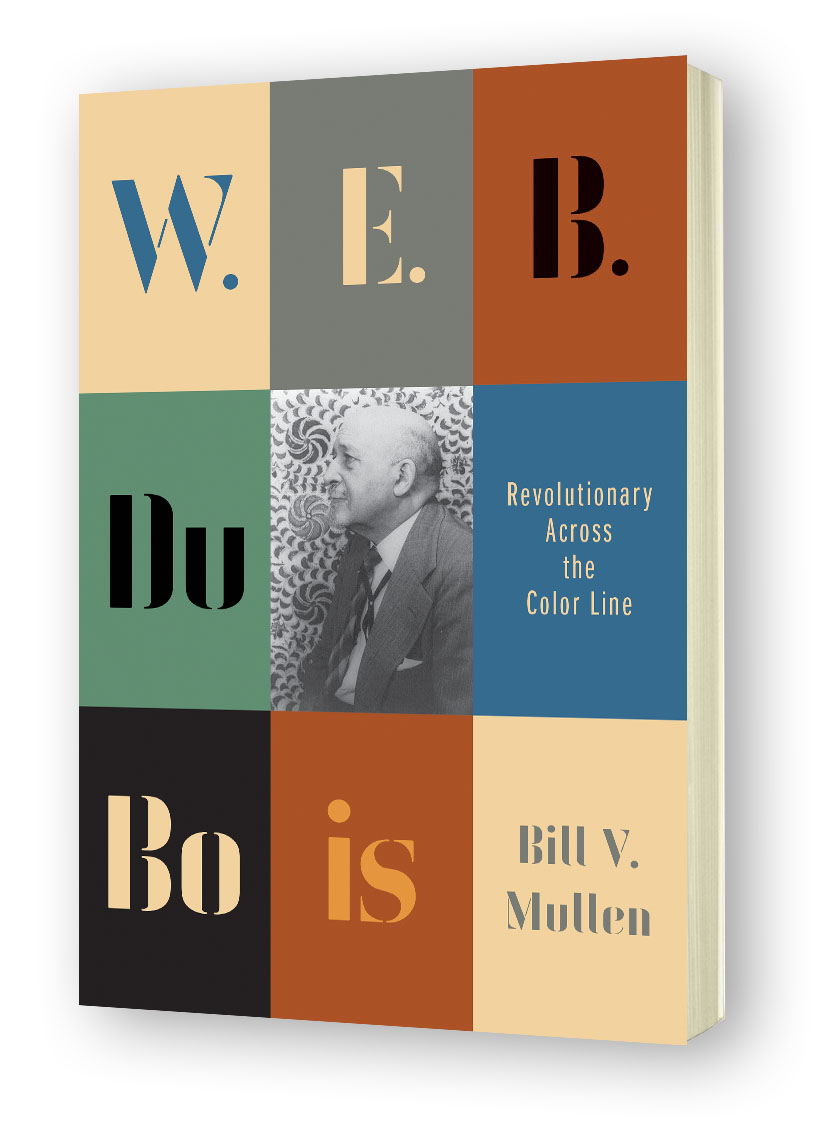 Just weeks ago the Movement for Black Lives in the U.S. released its political platform.  The six-part document called for a wide range of reforms of American capitalism: a universal health care system; a constitutional right to free higher education; cuts in military expenditures and re-investment in local infrastructures; a progressive restructuring of tax codes to ‘ensure and radical and equitable redistribution of wealth;’ a guarantee of the right of workers to organise. The document also called for the demilitarisation of U.S. police, an end to capital punishment, and the end of surveillance of Black communities by law enforcement.1

The Movement for Black Lives platform is a document the late W.E.B. Du Bois would have would have proudly endorsed.  Indeed, in 1935, at the height of the Great Depression, Du Bois published in the Pittsburgh Courier newspaper The Atlanta Creed, a bullet point program for Black equality and liberation.  The ‘Creed’ called for ‘Business for Public Welfare, and not for Private Profit;’ ‘No monopoly of land, materials, or machines in private hands;’ ‘Political power not for jobs but for public recognition of the Negro’s right to share equally and proportionally in all public expenditures; for protecting all labour in wage and work; and for redistributing wealth from the rich to the poor through taxation and nationalisation.’ Most boldly, Du Bois called for Socialism: ‘We believe in the ultimate triumph of some form of Socialism the world over; that is, state ownership and control of the means of production, and equality of income; we believe that the ultimate power in the state should rest in the hands of those who work, and that the state should be ruled by them.’2

The affiliation between The Atlanta Creed and the Movement for Black Lives should inspire us to think on Du Bois’s place in history. The ‘Black Radical Tradition,’ as the late Cedric Robinson once coined it, has historically been rooted in Black political self-activity often times linked to Left-wing social movements. Du Bois represents this trajectory perfectly: at the turn of the 20th century, he aligned himself simultaneously with the Pan-African Movement, then briefly with the U.S. Socialist Party.  In the 1920s, he was editor of the National Association for the Advancement of Colored People (NAACP) while voyaging to the Soviet Union in 1926 to witness first hand the importance of the Russian Revolution for African-Americans.  On his return, he famously declared, ‘If what I have seen with my eyes and heard with my ears is Bolshevism, I am a Bolshevik.’3 In the 1940s, Du Bois was a signatory to We Charge Genocide: The Historic Petition to the United Nations for Relief from a Crime of the United States Government Against the Negro People.  The petition, authored by Communist Party member William Patterson and the Civil Rights Congress, used the 1948 U.N. definition of ‘genocide’ created after the Holocaust to indict U.S. lynchings and police killings of African-Americans4 perhaps the original Black Lives Matter moment. In 1951, Du Bois was indicted by the federal government as a ‘foreign agent’ for his public work with the U.S. Peace Information Center which campaigned against the proliferation of atomic weapons. In 1961, on the eve of his move to Accra, Ghana, Du Bois wrote to Communist Party chairman Gus Hall requesting membership in the Communist Party of the United States.

Du Bois not only prefigures the Black Lives Movement of our time, with his ever-expanding vision for challenging capitalism and liberal democracy, but summons us to act upon what Martin Luther King, Jr. called the ‘fierce urgency of now.’  Since the 2003 U.S. invasion of Iraq, and the economic crisis of 2008-2009, planetary capitalism has inflicted multiple new forms of violence on the world’s most vulnerable.  As I write this blog post, the internet is aflame with the image of Omran Daqneesh, a five-year Syrian pulled from the rubble of an Aleppo bomb dropped in the name of the tyrant Bashar al-Assad.  Assad has used the pretext of fighting ISIS, the sectarian jihadist group given birth by the U.S. invasion of Iraq, as pretext for the massacre of thousands of his own people. Du Bois provides reminders of what a fearless anti-imperialist criticism of this moment might look like.  As he wrote in his Autobiography, published posthumously, ‘if the majority of the world’s people who are unsheltered, with starvation and poverty, can in reasonable time obtain a minimum supply of food, clothing and shelter, and the beginning of modern culture, imperialism cannot maintain itself unless Western acquisitive society pays for it with less comfort, less luxury, and goods and privilege more equally divided.’  This price imperialism refuses to pay, wrote Du Bois, ‘and here lies the problem of the modern world.’5

But we also turn to Du Bois to hold fast, as Walter Benjamin put it, to an image of the past. The Black Lives Matter movement has generated a kaleidoscope of social protest: young and old African Americans marching in Milwaukee, challenging national guard lines in Baton Rouge, pressuring for police indictments in Baltimore, waving Palestinian flags in Ferguson.  This political labour has roots that Du Bois was perhaps the first African-American to diagnose.  In his magisterial history of the U.S. Civil War and its aftermath, Black Reconstruction in America, Du Bois referred to the 200,000 slaves who left the plantations during the war to fight with the Union Army as a ‘general strike’ against the system of slavery.  Emancipation, Du Bois argued, was won by African-American self-activity that pushed the U.S. state and its President, Lincoln, into granting formal, legislative freedom.6

Du Bois offers us in Black Reconstruction a theory, and a portrait, of social movements, and of Socialism, from below.  The slave rebellions, Du Bois wrote, were an ‘experiment of Marxism,’ the working-class seeking its own self-emancipation.   Late in life, when many people, Black and white, had abandoned him for his Cold War commitments to Socialist ideas and principles, Du Bois stood firm, declaring the Chinese Communist Revolution, and Stalin’s Russia, examples of the masses controlling their own fate.  Du Bois came to see these 20th century struggles as reenactments of slave emancipation, even while often ignoring the abuses of power, and of Socialist principles, Stalinism rendered.

Seen from a Du Boisian perspective, Black Lives Matter can be understood as the latest eruption in a long history of Black-and human-freedom struggles.  It can also be seen part of a narrative arcing towards the emancipation of ‘each according to this ability, each according to his needs.’  This biography of Du Bois hopes to contribute an understanding of how Du Bois’s past life and thought can be seen in continuity with our present, while casting light to illuminate the way forward.

Bill V. Mullen is Professor of English and American Studies at Purdue University. He is the author of Popular Fronts: Chicago and African American Cultural Politics, 1935-1946 (University of Illinois Press, 1999) and Afro-Orientalism (University of Minnesota Press, 2004). He is co-editor with Fred Ho of Afro-Asia: Revolutionary Political and Cultural Connections Between African-Americans and Asian-Americans (Duke University Press, 2008). He is a member of the United States Campaign for the Academic and Cultural Boycott of Israel.

W.E.B. DuBois: Revolutionary Across the Color Line by Bill V. Mullen is available from Pluto Press.

4  See ‘We Charge Genocide: The Historic Petition to the United Nations for Relief from a Crime of The United States Government Against the Negro People’.  New York: International Publishers, 1951.  After the killing of Trayvon Martin by George Zimmerman in 2012, an intergenerational grassroots group calling itself ‘We Charge Genocide’ formed to document police killings of African-Americans in Chicago.  In 2014, eight members of the group travelled to Geneva, Switzerland to testify before the United Nations’ Committee Against Torture.  As reported in Ebony Magazine, ‘WCG submitted a shadow report to the UN titled, ‘Police Violence Against Chicago’s Youth of Color.‘ According to WCG’s website, “The report reveals the disturbing and intolerable truth that police officers regularly engage in torture. Specifically, the Chicago Police Department is in violation of Articles 2, 10, 11, 12, 13 & 14 of the Convention of Torture, through the cruel, inhuman, and degrading treatment of youth of color in Chicago.”  See A. Pulley, ‘Chicago Activists ‘Charge Genocide’ at United Nations.’  Ebony Magazine. Nov. 17, 2014  http://www.ebony.com/news-views/chicago-activists-charge-genocide-at-united-nations-043#ixzz4HrZMfaam

5  W.E.B. Du Bois, ‘The Autobiography: A Soliloquy on Viewing My Life from the Last Decade of Its First Century’. New York: International Publishers, 1968, 17.