by Terese Jonsson
BUY THE BOOK

To coincide with the publication of her book Innocent Subjects, Terese Jonsson critiques white guilt through the lens of the events of 2020, and looks to histories of anti-racist feminisms for inspiration on how to build true solidarity across difference.

It has been a year in which talk of whiteness and white supremacy has been both everywhere and nowhere. The extraordinary scale and power of the Black Lives Matter uprisings around the world in the wake George Floyd’s murder by police in the United States reinvigorated long-standing calls for institutions – police, education, media and everything in between – to account for and redress the harms of their white supremacist histories and structures.

In Britain, protestors’ toppling of the statue of slave-trader Edward Colston reignited conversations about the country’s history of slave-trading and colonisation with unprecedented strength, inspiring many of us to hope (even if just a little bit) that perhaps, just perhaps, this would be the moment in which the country starts to truly reckon with its structural racism. Amidst the upheaval, books such as Reni Eddo-Lodge’s Why I’m No Longer Talking to White People About Race and Robin DiAngelo’s White Fragility, shot up the book charts. In the liberal/left social media sphere, timelines were flooded with well-meaning white people saying it’s time to talk about whiteness.

Yet white people (myself included) can be very good at declaring that we need to talk about whiteness without really doing so, without taking any meaningful redistributive action, or without stepping out of our comfort zones. As Sara Ahmed has argued, such ‘declarations of whiteness’ are ‘non-performative’ in that they do not do what they say: they do not challenge white privilege so much as exhibit it. In her recently published essay Whites, Otegha Uwagba writes of the physical and emotional toll this summer’s events took on her, as she observed her inbox become ‘a dumping ground for white guilt’: ‘Even at their most penitent’, she writes, ‘white people have a way of making it hard to breathe’.

The performances of ‘white guilt’ which Uwagba describes are less about repairing racial harm than they are moves towards innocence: by showing how bad I feel about racism, I show that I am good. Anti-racist activists and scholars of colour have long highlighted the harm caused by white people’s claims to innocence. In her book-length exploration of the topic, Gloria Wekker analyses Dutch whiteness, highlighting how histories of colonisation and racial violence are hidden behind the facade of racial innocence. White innocence reverberates forcefully as backlash against anti-racist movements and analyses. We see it in the Conservative Government’s attempt to censor anti-racist educators from teaching white children about, in Women and Equalities Minister Kemi Badenoch’s words, ‘white privilege and their inherited racial guilt’’. We see it in the far right’s white victimhood narratives. And we see it in deep-seated liberal and left displays of moral innocence, which always frame racism as something which exists elsewhere.

In Innocent Subjects: Feminism and Whiteness (written before the events of 2020), I examine the ways in which white innocence has been variously upheld, challenged, destabilised and defended within British feminist politics. ‘White women in the British [women’s liberation movement] are extraordinarily reluctant to see themselves in the situation of being oppressors, as they feel that this will be at the expense of concentrating upon being oppressed’, Hazel Carby wrote in her landmark 1982 essay ‘White woman listen! Black feminism and the boundaries of sisterhood’. Thirty-six years later, Eddo-Lodge notes that white feminists perceive her ‘speaking up about racism in feminism’ as ‘a violent attack on their very idea of themselves’. Sarita Srivastava, drawing on research with Canadian feminist organisations, argues that such responses have their roots in the colonial legacies of white femininity intertwined with ‘feminist ideals of justice and egalitarian community’.

Critiques of whiteness within feminist spaces, then, have been – and continue to be – habitually resisted through pernicious performances of white feminist innocence. But it is also within feminist communities where racism and white dominance within progressive and radical politics have been most extensively challenged. And let’s be clear, it is Black feminists and feminists of colour who have led and shaped this often fraught and emotionally exhausting work, as part of advancing political frameworks which understand different oppressive systems as interlocking (the terminology of ‘interlocking oppressions’ originated in the work of the Combahee River Collective in the early 1970s).

As feminist critical race scholar Sherene Razack argues, liberatory work rooted in an understanding of different oppressive systems as entangled and dependent upon each other requires a shift of focus, away from innocence and towards complicity. Recognising one’s complicity within oppressive systems is not about wallowing in guilt, but about developing an acute understanding of precisely where and how we are positioned within oppressive structures, and how we can use the power that we are afforded within these structures to work towards undoing them. 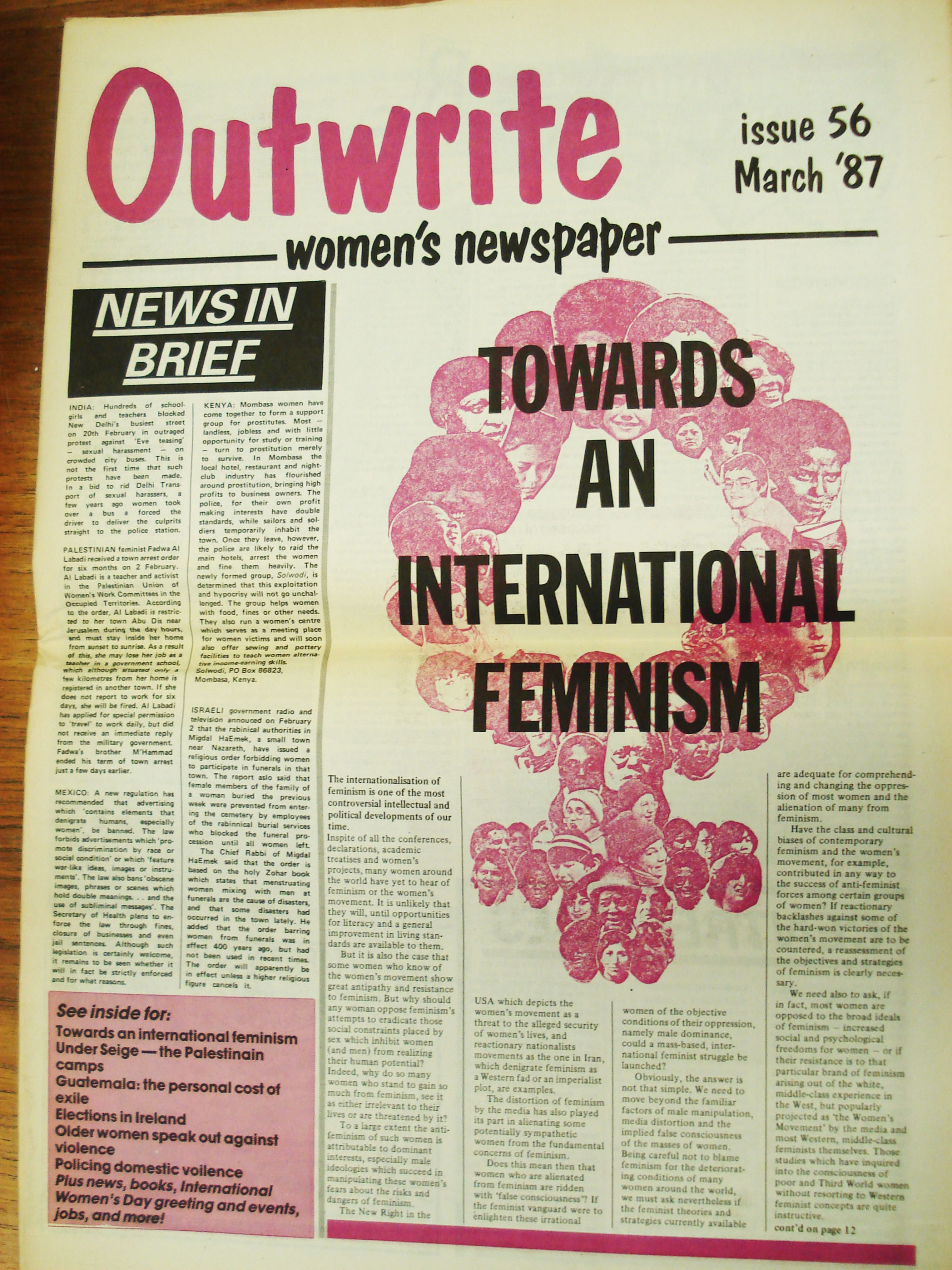 Much can be learnt from anti-racist struggles within feminist communities, most of which are not visible within dominant narratives, which continue to tell the story of feminism as one which belongs to white women. Going back to the early 1980s in Britain, while far from all white feminists did listen to critiques such as Carby’s – made within the context of a burgeoning Black British feminism – some did commit to anti-racist work, and collaborations and solidarity between women of colour and white women increased. One significant example was Outwrite Women’s Newspaper, an anti-imperialist, anti-racist and anti-capitalist feminist newspaper published monthly between 1982 and 1988 by a multiracial collective of women. Especially relevant for today’s generation of activists, Outwrite provides a valuable archive of grassroots and coalitional activism in the context of a brutal Conservative government cutting back the welfare state, promoting anti-migrant policies and criminalising protest.

In this moment of racial-pandemic-climate-capitalist crisis, the stakes for those of us who want to see a different and socially just world could not be higher. Broad-based anti-racist, anti-capitalist, feminist and disability justice coalitions are urgently needed. Investments in white innocence get in the way of such coalitions and instead reproduce white dominance, through a denial of people of colour’s lived realities of racism. Anti-racist feminist histories teach us that it is only through continuous attention to interlocking oppressions and how they manifest, including within our own political communities, that it is possible to build real solidarities across difference.

Terese Jonsson is an independent feminist scholar and editor with a PhD in Gender Studies from London Metropolitan University. She is a member of the editorial collective of Feminist Review. Innocent Subjects: Feminism and Whiteness is out this month.