From all four corners of the globe, the Industrial Workers of the World made rampant capitalists shake in their boots! This article, by the editors of Wobblies of the World, tells the global history of the Wobblies and the radical organising and displays of solidarity in countries as diverse as Australia, Canada, Mexico, South Africa, Sweden and Ireland.

In our last blogpost we closed with an explanation of the IWW motto—an injury to one is an injury to all—as an expression of the core Wobbly value of solidarity in opposition to capitalism. Capitalism, however, varied across industry, geography, and country, creating different injuries in different places and the various forms that organising and solidarity took across the IWW’s chapters reflected these differences. In this post, we want to highlight some of the regional and global variations of the influences that acted upon the IWW, and of subsequent IWW organising, as described in the book. To capture the flexibility and adaptability of the IWW, the contributors to this volume drew on archival resources scattered around the world and on linguistic skills well beyond most individual researchers. (Someone out there surely must read both Maori and Finnish, right?)

An appropriate understanding of what exactly the IWW was is necessary to see its variations. Salvatore Salerno’s Red November, Black November: Culture and Community in the Industrial Workers of the World (1989) crucially shifted from prior scholars’ views of the IWW as a formal organisation to framing it as more like a social movement. Growing from this perspective, recent work—including that of the three editors—on the IWW in the United States emphasised the many cultural elements of the IWW that spread its influence beyond those holding the union’s red membership card. The scholars included in the present volume trace the IWW’s growth as one strand within the global syndicalist movement and document both the chartering of formal union branches in many countries, as well as forms of its cultural and intellectual influence carried by mobile workers, sailors, and Wobbly publications.

As we wrote in the book’s introduction, ‘the IWW was an international organisation, with national administrations, local branches, and mobile members spread out across the globe.’ If we judge the IWW’s reach by its official international organisation, its peak came directly before American entry into the First World War, and included branches in Australia, Canada, Chile, England, Mexico, New Zealand, South Africa, and Sweden. But new research illustrates how the chronology of the IWW’s ascendency and retreat varied by region and within individual locals in countries without formal ties to the international organisation. The IWW achieved different forms—from having the power to organise at workplaces to being limited to speaking and propaganda efforts—over time, a trend heightened by government repression, most notably during the First World War. Wartime repression and decline is an important element in the IWW’s story, though decline occurred more gradually than often recounted and the IWW retained significant power out through its global reaches into the 1920s and 1930s. For the IWW to inspire and grow in as many countries as it did, it had to adapt to local conditions.

The IWW itself was also an adaptation of sorts. The time has long since passed when scholars could describe the IWW as an organisation solely spawned by white American hard rock miners. The IWW’s founding and its 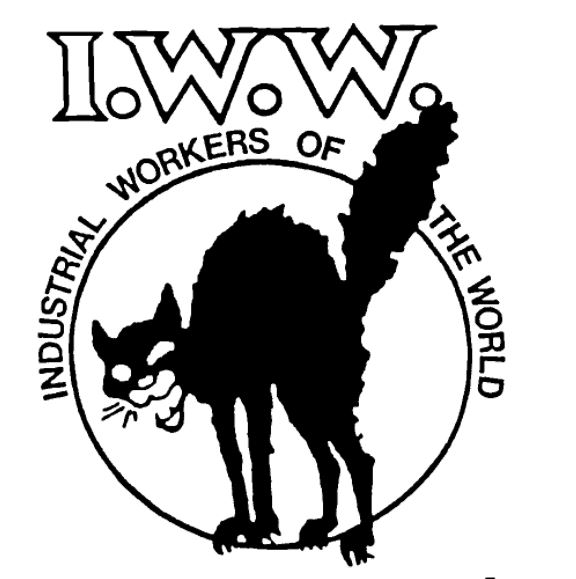 membership in the United States reflected myriad immigrants arriving in or passing through the country and the ideas they carried. Contributions to the book reflect this diversity in different regions of the United States and in the IWW’s contiguous spread into Canada and Mexico. Influences were also intellectual, as Dominique Pinsolle’s chapter, Sabotage, the IWW, and Repression: How the American Reinterpretation of a French Concept Gave Rise to a New International Conception of Sabotage, brings a nuanced understanding to the IWW’s development of the concept and tactic of sabotage represented by the iconic black cat, the ‘Sabo Tabby.’

In the United States, the IWW had a national level organisation that supported local labour organising to various degrees—usually limited by the national body’s lack of financial resources—but never controlled it. In the Southwest, the IWW forged its own way forward among itinerant workers, piecing together an existence through agricultural labour and construction work on projects like roads, laying track, and gas pipelines. The IWW also organised in Arizona copper mines in the years before American entry into World War One. Multiracial workforces were the norm and the IWW’s acceptance of all workers regardless of race dramatically shone through in the region. Many Mexican IWW organisers also organised with the revolutionary Partido Liberal Mexicano. This lent a particularly militant streak to IWW organising in the region.

In Australia, the IWW worked with the mainstream unions—despite ideological differences—in opposing World War I, which resulted in surprising solidarity from those unions when the IWW suffered fierce government repression. In Ireland, one-time Wobblies led a nationalist revolution. What Wobblies did in Tampico, Mexico could be quite different than what they did in Malmö, Sweden. Perhaps equally fascinating are the commonalties. For one, the IWW did not shed its bedrock opposition to racism and xenophobia, no matter the mainstream customs of whichever society in which it organised. The IWW was the first white-majority union or organisation to attempt lining up Maori in New Zealand and Xhosa in South Africa. The IWW rejected anti-Asian sentiment in California and embraced Finns across northern Ontario.

As we argue in our introduction to this volume:

The IWW defined, in a very real way, the ideal of solidarity when it coined the legendary motto, ‘An Injury to One is an Injury to All.’ That slogan, like the Wobblies themselves, spread globally. For example, it was introduced by Wobbly sailors to South Africa in the First World War era, and today remains the motto of South Africa’s largest labour federation, the Congress of South African Trade Unions. The struggles of a century ago still resonate throughout the industrialising Global South as well as the deindustrialising Global North. Only when workers around the world embrace the spirit and internationalism of the Wobblies will they be strong enough to challenge global capitalism, which might as well formally adopt as its own motto, ‘divide and conquer’.

We’re writing this blog post as German elections results indicate that Alternative für Deutschland (AfD) will become the first openly nationalist party to join the Bundestag in over half a century, largely on the back of anti-immigrant sentiment. In Myanmar, the ‘ethnic cleansing’ of Rohingya is ongoing. In the United States furore continues over Donald Trump’s attempt to force symbolic sports patriotism on American football players while ignoring the plight of American citizens in Puerto Rico. In Catalonia, Guardia Civil dispatched from Madrid raided the offices and arrested leaders of the independence/nationalist movement. Each draws from distinct local and regional histories, but they all rest on the fundamental issue of how people understand membership in ‘their’ community, how they construct the ‘all.’ For the IWW ‘an injury to one is an injury to all’ was and remains a rallying cry for solidarity against capitalism, racism, nationalism, and militarism. Forces which continue to wreak havoc on the planet now as surely as they did over century ago at the IWW’s founding. Our book’s lessons of the successes and failures of the IWW around the world point to one conclusion: the only way we can be defeated is if we stop fighting for justice in all its forms.

Peter Cole is Professor of History at Western Illinois University and Research Associate at the Society, Work and Development Institute, University of the Witwatersrand. He is the author of Wobblies on the Waterfront (University of Illinois Press, 2007).

David M. Struthers is an Adjunct Assistant Professor at the University of Copenhagen.

Kenyon Zimmer is Associate Professor of History at the University of Texas at Arlington. He is the author of Immigrants Against the State (University of Illinois Press, 2015).

Wobblies of the World: A Global History of the IWW edited by Peter Cole, David Struthers and Kenyon Zimmer is available to buy from Pluto Press.