by Peter Cole
BUY THE BOOK

Who are the Wobblies? Peter Cole, co-editor of Wobblies of the World, recalls the history of the Industrial Workers of the World; a revolutionary, internationalist union of workers, who aspired to build ‘a new society out of the ashes of the old.’ As capitalism continues to enact violence on workers worldwide, and politics takes a toxic turn, Cole asks: what use can the Wobblies be today?

In recent years, it may seem that any and all challengers to neoliberalism have been utterly decimated as its grasp on the world economy continues to tighten. We created this book with that in mind, as we believe the history of the Industrial Workers of the World (IWW), whose members frequently were nicknamed and still proudly declare themselves Wobblies, provides lessons necessary for people today. That does not mean to say that we, historians who claim to know history’s trajectory, could have predicted how chaotic and horrid the present moment would be. What with Donald Trump’s presidency unleashing all sorts of fascist, racist, homophobic, and other hateful forces. With a narrow majority of British voters supporting Brexit to divorce themselves from fellow Europeans. With Turkey’s leader, Recep Erdogan, doing the best he can to turn his nation into an authoritarian regime. With Jacob Zuma, in South Africa, utterly betraying the revolutionary potential of the struggle against apartheid. With Venezuela teetering and unrepentant sympathisers of fascism rising in Japan. Economic inequality soaring. Union density plummeting. The list of troubles and troublespots, the world over, can spin one’s head around and make one wonder if we are, to quote AC/DC, ‘on a highway to hell’.

The early 20th century, when a few hundred committed radicals founded the IWW, also was a time of great economic suffering and political conflict. As industrial capitalism ascended, hundreds of millions were pulled into its system and the great majority of workers struggled to make ends meet. Inequality on a scale previously unimaginable was unleashed into the world—what the IWW soon called the Pyramid of Capitalism in a famous 1911 poster. At that time, reformist labour unions and social democratic parties did not seem capable of challenging the ever-growing power of corporations and their tightening grips over governments. Already, of course, governments had proved ready and willing to dispatch police forces and armies to suppress radical dissent, labour unions, and strikes.

Enter the IWW which, along with anarchist and syndicalist organisations, 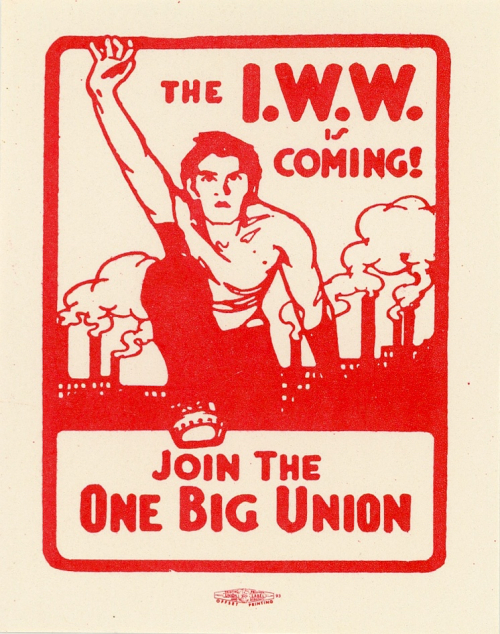 quickly became a massive and influential presence the world over. The IWW was founded in 1905, in Chicago, Illinois—the United States’ greatest industrial city. Chicago also was the site of the infamous Haymarket Massacre of 1886 in which the reasonable demand for an 8-hour workday died on the gallows along with Albert Parsons and three other anarchist, working-class activists. Not coincidentally, Lucy Gonzalez Parsons, Albert’s widow, was among the several hundred who launched the 20th century’s first great labour union, the IWW. Wobblies quickly fanned out across the United States, northwards to Canada and southwards into Mexico. Down into Central and South America and into the West Indies they went. They sailed across the Atlantic Ocean to the British Isles and then to continental Europe. Wobblies found their way to southern Africa, across the Indian Ocean to Australia and New Zealand, up to Japan, and back again to the America’s Pacific Coast.

Within a decade, the IWW had become a global phenomenon with members and branches in dozens of countries. Wobblies brought with them their fierce commitment to a better world—one in which the benefits of industrialisation and technology helped the many rather than just the precious few. To build ‘a new society out of the ashes of the old,’ Wobblies believed the best and only option was organising on the job. The rich controlled the government and courts despite the hope that, in a democracy, the masses of working people would be able to elect representatives to serve the majority.

On the job, by contrast, workers held tremendous power by doing the simplest of things—stopping work— which literally would stop the entire economy. Before radical transformation, Wobblies organised strikes and initiated other tactics ‘at the point of production’ to ‘get the goods,’ i.e. more money, fewer hours, and safer conditions. In the long term, Wobblies hoped to engineer a General Strike that would put workers in the proverbial driver’s seat with the next stop being a socialist world. Not a socialist nation surrounded by capitalist ones. The IWW always has been internationalist in its vision. And not Soviet-style socialism. Before and after the formation of the Soviet Union, Wobblies—along with millions of other syndicalists and anarchists—were skeptical, to put it kindly, of bestowing too much power on a single political party, even one committed to the working class. Hindsight seems to have confirmed their fears of an aptly-named dictatorship of the proletariat.

Although IWW members, literature and ideas spread to the far corners of the earth, historians and other scholars have had a hard time comprehending that seemingly simple fact. Of course, the union’s name—Industrial Workers of the World—should have been a clear signal but, alas, it was not. Historians are hardly the only ones of course, to fixate on (their own) individual nation-states. And, so, for the better part of a century, historians, workers, students and others interested in the IWW generally focused upon narrow slices of this organisation’s history. The IWW in Chile or Oklahoma were studied but not in tandem, not via comparison, and quite rarely considering transnational connections. 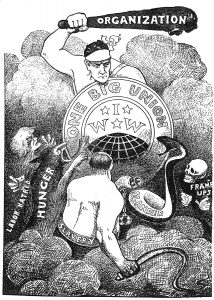 Fortunately, historians—forever looking backward—do have the ability to change the present and, possibly, future. This book signals the dawning of a new era in the study of the IWW. While this statement may seem overly audacious, we believe it to be true. This anthology includes contributions from twenty people who live around the world and have researched the IWW in countries across the globe. Never before have so many different Wobbly histories been told in the same volume. Some chapters focus upon a single individual or group of Wobblies in a particular place. However, what quickly becomes apparent is how global the IWW truly was. Wobblies were footloose, as Americans sometimes said in the 1910s. That is, they moved around. They rode the rails (often without paying for their tickets) looking for work or to support an IWW strike, free speech fight, or other cause. They also boarded ships and sailed the seven seas. As they did so, they brought with them Wobbly newspapers published in more than a dozen languages (and contributors to this anthology read many of those).

Wobblies and Wobbly publications delivered Wobbly ideals to fellow workers, men and women, in many lands. How else to explain the popularity of the IWW motto, ‘An injury to one is an injury to all’? This most basic explanation of the Wobblies’ core value, solidarity, is in direct opposition to capitalism which preaches individualism and encourages people to think of each other as competitors rather than fellow workers or even brothers and sisters. It’s true, 112 years after the birth of the IWW, capitalism is still here—perhaps stronger than ever. But, then, so are the hopes and dreams of billions of people who want to share in the wealth they produce rather than allow it to be accumulated by the privileged class. For those people, the Wobblies offer both cautionary tales and useful lessons.

Peter Cole is Professor of History at Western Illinois University and Research Associate at the Society, Work and Development Institute, University of the Witwatersrand. He is the author of Wobblies on the Waterfront (University of Illinois Press, 2007).

Wobblies of the World: A Global History of the IWW is available to buy from Pluto Press.