This is the history of the world, from the origins of the Cosmos to the present day, seen through three major narratives: work, sex and power – the forces that have done more than any other to shape the world as we see it now.

Willie Thompson, author of new book Work, Sex, & Power: The Forces that Shaped our History writes an encapsulated version of the new sweeping history of humankind. 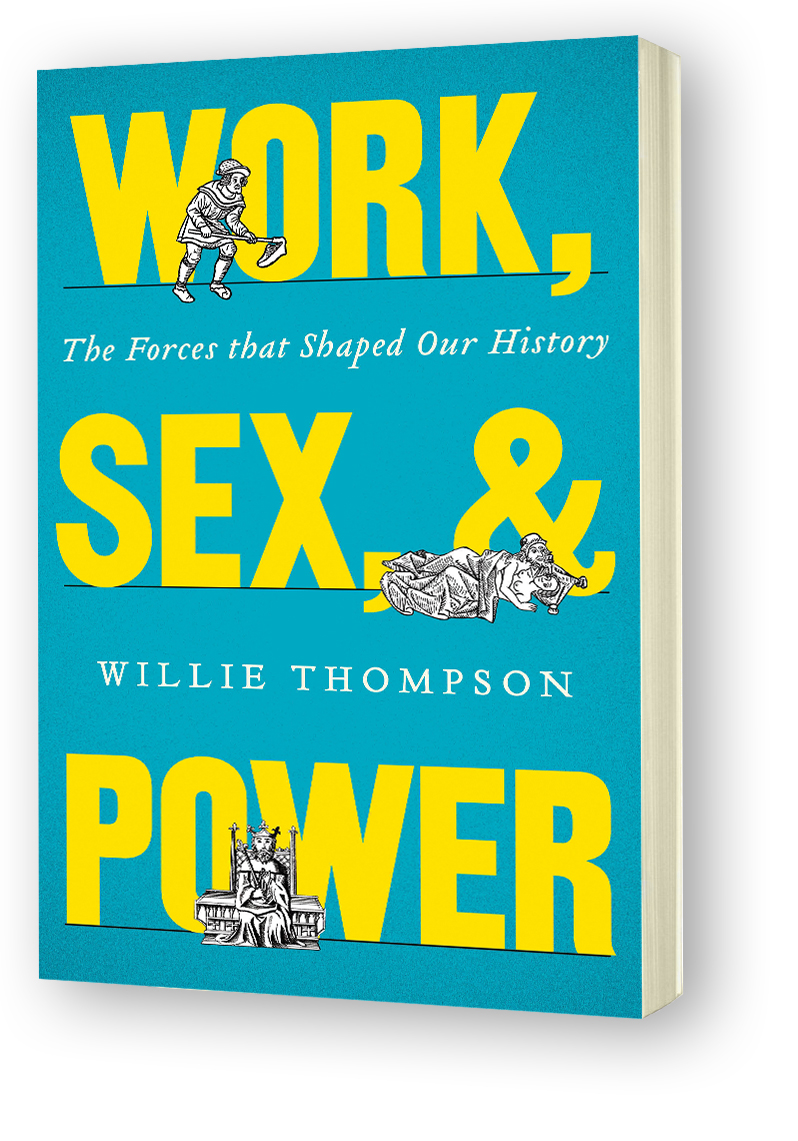 The current crises with mass casualties and associated horrors in Ukraine and the Middle East naturally have their own twenty-first century character. But they also illustrate forms of social, ideological and power relations that reach centuries and even millennia into the past. The deep past extends its tentacles into the present and, in Work, Sex and Power I aim to demonstrate how this affects our species.

Professor Kevin Morgan commented on the driving force behind the book. He remarked, ‘It’s so important that we don’t all get stuck in our particular historical byways’. Indeed in recent years such approaches, covering lengthy stretches of time and continents, have taken on greater prominence, with terms like ‘Deep History’ and ‘Big History’ entering the vocabulary.

This approach is represented in English–language texts by such widely-discussed volumes such as Daniel Lord Smail’s On Deep History and the Brain, Jared Diamond’s Guns, Germs and Steel and Kent Flannery and Joyce Marcus’s The Creation of Inequality. It’s likely this approach was stimulated by a deepening awareness of the apocalyptic threat to humanity caused by runaway global warming and species destruction. The inability of the small-scope historiography favoured in previous decades to generate much illumination regarding this crisis has proven its limits.

My volume is part of this new tendency but with a differing emphasis in important respects. It begins with argument on humans’ place in the universe and where they stand in the evolutionary process. It is concerned to emphasise both the continuity of humans with the animal kingdom and the wider biosphere, but also the categorical difference of their existence as social creatures equipped with language and, in their forelimbs, manipulative abilities possessed by no other creature. One early chapter discusses the evolution of conscious thought and the unique attribute of humans, in that through a developed form of consciousness they envisage their future selves, and their future projects, unlike any other species.

Work, Sex and Power enters its historical discussion (more thematic than chronological) beginning in the Palaeolithic era where the original Homo sapiens hunter-gatherer foraging lifestyle was based on isolated family groupings and clan communities. Amazingly, this lifestyle continued for ten thousand years or so and, as I emphasise, no less than ninety-five per cent of modern humans’ 200,000 years on the planet. Even now it still exists in a various isolated locations.

The discussion then turns to the next ten thousand years following what is sometimes referred to as the ‘Neolithic Revolution’ which rapidly emerged over all the continents with the exception of Australia. Crucially, it is notorious for ushering in the shift to production (via agriculture and herding) of animal and vegetable foodstuffs which replaced the earlier process of food acquisition ‘in the wild’. These techniques originated in what we now call the Middle East and there may have been some degree of imitation elsewhere, but they were also developed quite independently in different areas of the globe such as the Americas. The driving force was almost certainly climate change – as the glaciation of the latest ice age melted, humans experienced both environmental catastrophe, but also beneficial effects.

The consequences of this transformation for the societies involved were truly enormous and are still noticeable today. In the words of Jared Diamond: ‘the hand of history’s course at 8000 B.C. lies heavily on us’. The central transformation was the character of work and what Marxists refer to as the relations of production. A central theme of the volume, indeed the central theme, is that the history since the Neolithic Revolution has been the history of forced labour, which has four structural forms varying in their details and frequently intermixed: exaction of tribute from producers; serfdom or bonded agricultural labour; outright slavery and wage labour. I discuss in one chapter the significance of debt, drawing on the invaluable work of David Graeber’s Debt: the First 5000 Years, which demonstrates how debt emerged as a powerful mechanism used to force individuals into one or other of these forms of forced labour.

Work, Sex and Power explains how wage labour in the context of market economies became the prevalent form of economic compulsion thanks to the second great historical transformation: the creation of technologies that succeeded in unlocking the immense energies imprisoned in fossil fuels, a process that commenced around 300 years ago and proceeded to give us the world we now experience. I discuss the forces behind this momentous historical upheaval along with the economic, social, political and cultural consequences. These include nationalism and the intensification of a process which prevailed across time and circumstance, from Palaeolithic forager bands to the twenty-first century, and which has now reached a peak in intensity – namely human migration. I explain how this second great transformation began and extended through the seaborne imperialisms of Western European powers, promoting slavery and racism in their wake and culminating in the globalisation in all spheres from economy to culture in which the world is now entangled, dominated by a single superpower that is run by an oligarchy which believes that it possesses a divine right or ‘manifest destiny’ to rule the world.

The second aspect of human relationships, Sex, is referred to both in the sense in which it is understood today as well as the broader aspects of gender relations, including kin structures. The argument begins with the distinctiveness of the human anatomy, which enables us to enjoy a far broader range of erotic practices than any other sexually-reproducing creature, but also has the effect of enabling one gender, when circumstances permitted, to cruelly exploit the other, throughout all times and social categories – from the households of toilers to the harems of imperial dynasts. These forms of exploitation incorporate everything from making women serve as domestic drudges and the most brutally driven of field workers, to sexual slavery at all levels of society; as pawns in power games among elites; women’s subjection often accompanied by physical mutilation, genital or otherwise.

The third element, Power, is explored extensively in its varied dimensions which include law and punishment. Clearly a fundamental component of social structures and personal relations, in fact power is not quite as all-pervasive as Foucault imagined. I explain why, in hunter-gather society, the potential authoritarian power is intrinsically limited. But it is also true that when circumstances altered these primitive social structures, power blooms unceasingly – a process related to inherent potentials which were suppressed in earlier social formations and later promoted by the character of kin structures and economic differentiation between clans during the period of agrarian settlement. I discuss why the default line of development for these societies has been the establishment of territorial empires ruled by god-kings, whether based on stone, bronze or iron technologies. The wider significance of these tool-creating technologies is also taken into consideration.

Various forms of power relations, military, civil and cultural are examined. I summarise the evolution of weaponry from hand-held blade weapons through cannon and firearms to nuclear missiles and relate them to their social and political contexts. I make a lot of use of the historical sociologist Michael Mann and his four volumes on The Sources of Social Power, though at the same time these are handled critically. Power is analysed both from the elite perspective (one section is headed Games of Thrones) and from the viewpoint of those who have resisted it.

This latter theme is central to the argument – resistance has occurred for millennia, including ancient Egypt, but I focus on the modern era when large scale resistance to authoritarian power and projects to replace it with more egalitarian societies emerged along with the second great transformation. The strengths and weaknesses of these projects are explained both their general failure and very partial successes. One chapter deals with ‘Socialism: its Promise and Paradox’, in the many varieties of this attempt at world transformation, from utopian socialism and anarchism to communism and the communist bloc of the twentieth century.

In all of these chapters my approach is resolutely materialist, but this does not mean that I neglect the belief systems which have occupied the minds of humans throughout history. Instead, they are treated as an autonomous reality regardless of the ways that they are relate to the material realities of life. That connection may be evident, unvarnished and materially motivated – such as the assertion that ‘greed is good’; or else apparently quite detached, such as the behaviour of acetic hermits and monks. Regardless, belief systems and religions are manifestly also forces, interlinked with work, sex and power that have shaped our history.

My conclusions raise the question – can the remarkable material and scientific advances of past decades be handled in such a way as to bring into existence a global social order based upon liberty, equality and fraternity? The sad reality is this an extremely difficult project in the face of irresponsible power (possibly even yet producing a nuclear cataclysm), religious bigotry and threatened environmental catastrophe and that the social muck of ten millennia cannot be cleared away in two or three centuries. Nevertheless, the objective remains a viable one and the project of averting environmental destruction can lead us towards other aims. Work, Sex and Power concludes with the injunction of the great seventeenth-century philosopher Baruch Spinoza, ‘All good things are difficult!’

Willie Thompson was Professor of Contemporary History at Glasgow Caledonian University. His books include Ideologies in the Age of Extremes (Pluto, 2011) and What Happened to History? (Pluto, 2000). He is currently vice-president of the Socialist History Society.

Work, Sex and Power: The Forces that Shaped our History is available to buy  from Pluto Press.