In Arise, Jane Holgate argues that unions must revisit their understanding of power in order to regain influence and confront capital. Drawing on two decades of research and organizing experience, Holgate examines the structural inertia of today’s unions from a range of perspectives: from strategic choice, leadership and union democracy to politics, tactics and the agency afforded to the majority of union members.

In the midst of a neoliberal era of economic crisis and political upheaval, the labor movement stands at a crossroads. Union membership is on the rise, but the ‘turn to organizing’ has largely failed to translate into meaningful gains for workers. There is much discussion about the lack of collectivism among workers due to casualization, gig work and precarity, yet these conditions were standard in the UK when workers built the foundations of the 19th-century trade union movement.

Drawing on history and case studies of unions developing the effective use of power, Jane Holgate’s book lays out strategies for moving beyond the pessimism that prevails in much of today’s union movement. By placing power analysis back at the heart of workers’ struggle, the chapters of Arise demonstrate that transformational change is not only possible, but within reach.

JANE HOLGATE is Professor of Employment Relations at the University of Leeds. She is the co-editor of Union Voices: Developing Organizing in the UK (Ithaca 2012) and has held a number of positions in the trade union movement as an NGA “mother of chapel”, Unison branch chair and regional council delegate, UCU caseworker and secretary of Hackney Trades Union Council. She has worked closely on research projects with trade unions, including the GMB, TGWU, CWU, Bectu, Usdaw and the Trades Union Congress.

END_OF_DOCUMENT_TOKEN_TO_BE_REPLACED 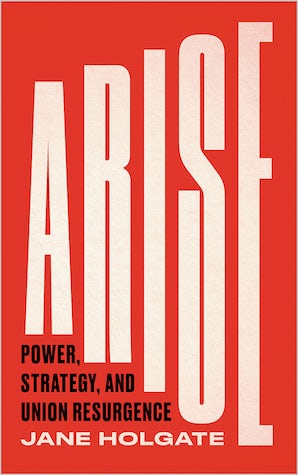