Pluto Press and Waterstones are delighted to host an event to mark the release of Bad News for Labour: Antisemitism, the Party and Public Belief, a ground breaking study revealing how accusations of antisemitism damaged the British Labour Party under Jeremy Corbyn’s leadership.

During the summer of 2018, numerous members of the Labour Party were accused of anti-Semitic behaviour by their detractors. The controversy reached fever pitch amid claims that the Labour Party had become ‘institutionally racist’ under the leadership of Jeremy Corbyn, and that the prospect of a Corbyn-led government posed an ‘existential threat’ to Jewish life in Britain.

The authors will be discussing the book and will joined by acclaimed film director Ken Loach for a portion of the discussion.

Greg Philo is Professor of Communications and Social Change at the University of Glasgow, and Director of the Glasgow University Media Unit.

Justin Schlosberg is a media activist, researcher and lecturer in Journalism and Media at Birkbeck College, University of London. He is a former Chair of the Media Reform Coalition and Edmund J Safra Network Fellow at Harvard University.

Antony Lerman is Senior Fellow at the Bruno Kreisky Forum for International Dialogue in Vienna and Honorary Fellow of the Parkes Institute for the Study of Jewish/non-Jewish Relations at Southampton University. He has written on multiculturalism, racism, antisemitism, and Israel/Palestine for the Guardian, Independent, New York Times, Haaretz, Prospect, Jewish Chronicle and London Review of Books.

David Miller is Professor of Political Sociology at the University of Bristol. He is a founder director of Public Interest Investigations and a director of the Organisation for Propaganda Studies.

END_OF_DOCUMENT_TOKEN_TO_BE_REPLACED 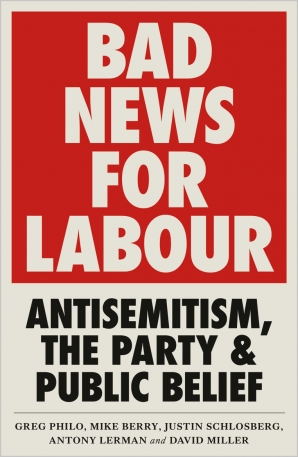 A groundbreaking study on the reality behind the headlines on antisemitism and the British Labour Party.
END_OF_DOCUMENT_TOKEN_TO_BE_REPLACED
All events
X