What does it mean to leave one’s home indefinitely? Or what happens when a mass departure from a single territory is triggered? This conversation explores the notion of voluntary departure from one’s homeland. Exploring what it means to flee, live in exile, and uproot your life through its social, political, economical and environmental impact, we will discuss new tools for survival, forms of nomadism, as well as what happens to the place that is left behind.

In 2010 and 2011, it was estimated according to census data that around 900,000 UK citizens were long-term residents in other EU countries. In 2017, there were 3.8 million EU citizens living in the UK, an estimated 6% of the total population. These statistics mean that the concept of ‘Home’ will be redefined for many of us within Europe as Britain prepares to leave the EU on 29 March 2019.  With that in mind, the Architectural Association and Florian Idenburg of SO – IL are partnering with the Dutch Embassy to organise a series of talks that will invite architects, artists, politicians, theorists and designers to look at the new forms of collaboration, identity, trade and exchange that the UK will need to invent as it redefines its relationship with the rest of Europe.

Madelon Vriesendorp is a Dutch artist based in the UK who co-founded the Office for Metropolitan Architecture with Rem Koolhaas, Elia and Zoe Zenghelis in the early 1970s. Paintings she produced at the time were used for book and magazine covers, notably Flagrant Delit on the cover of Delirious New York in 1978.Her work has been acquired by collectors, public and private, including the CCA Montreal, and Frankfurt Architectural Museum, amongst others. The art projects and writings have been published widely amongst others in Build, Design Quarterly, Domus, Abitare, Casabella, Architecture Aujourd’hui, while working on costumes, built objects, paintings and short stories. She received an Honorable Fellowship from the RIBA in February 2009 and in June 2017 the Architectural Association awarded her an Honorary Diploma “in recognition of her extraordinary contribution to the imagination of architecture.”

Jan Willem Petersen founded Specialist Operations in 2006 as an independent research and design office. He is a spatial planner, architect, and researcher based in the Netherlands. He oversees an interdisciplinary team to develop strategies and shape processes that rebuild resilient urban and conflict-affected environments. The office initiates projects, designs interventions, develops (planning)frameworks, and conducts fieldwork and analytical research, and often responds to questions derived from disciplines beyond architecture and urban planning. Specialist Operations supports governments, international organizations, and local communities by providing spatial analysis, strategic planning, in-depth urban research, and design.

Malkit Shoshan is the founder and director of the architectural think tank FAST: Foundation for Achieving Seamless Territory. FAST uses research, advocacy, and design to investigate the relationship between architecture, urban planning, and human rights in conflict and post-conflict areas. Its cross-disciplinary and multi-scalar work explores the mechanisms behind, and the impact of, displacement, spatial violence, and systemic segregation on people’s living environments. FAST’s projects promote spatial justice, equality, and solidarity. Shoshan is the author and the mapmaker of the award-winning book Atlas of Conflict: Israel-Palestine  (Uitgeverij 010, 2010). She is also the co-author of the book  Village: One Land Two Systems and Platform Paradise  (Damiani Editore, 2014). In 2016, Shoshan was the curator of the Dutch Pavilion for The Venice Architecture Biennale with the exhibition BLUE: Architecture of UN peacekeeping missions, which examines the spatiality and legacy of UN Peace Operations in conflict-affected urban environments and will be the subject of her forthcoming book BLUE: Peacekeeping Architecture (Actar, 2018).Currently, she is the Area Head of Art, Design, and the Public Domain MDes Program at Harvard GSD, where she also teaches the Spaces of Solidarity course.

Gurminder K Bhambra is Professor of Postcolonial and Decolonial Studies in the School of Global Studies, University of Sussex. She is author of Connected Sociologies (Bloomsbury, 2014, available open access), Rethinking Modernity: Postcolonialism and the Sociological Imagination (Palgrave, 2007), and co-editor ofDecolonising the University (Pluto, 2018).

END_OF_DOCUMENT_TOKEN_TO_BE_REPLACED 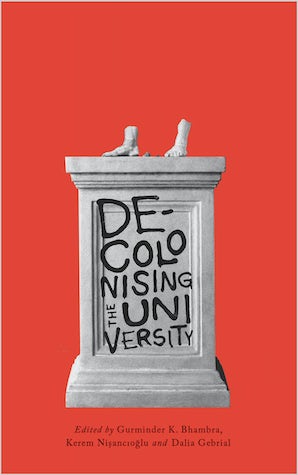