Join Henry Bell in conversation with Vannessa Collingridge as they discuss Henry’s new book on John Maclean.
Event is free but please register via link.
Pluto Press and Waterstones are delighted to host the launch for John Maclean: Hero of Red Clydeside, the new book by Henry Bell. He will be in conversation with Dr. Vanessa Collingridge.
‘I am not here, then, as the accused; I am here as the accuser of capitalism dripping with blood from head to foot’ – John Maclean, Speech from the Dock, 1918.
Feared by the government, adored by workers, celebrated by Lenin and Trotsky. The head of British Military Intelligence called John Maclean ‘the most dangerous man in Britain’.
This new biography explores the events that shaped the life of a momentous man – from the Great War and the Great Unrest, to the Rent Strike and the Russian Revolution. It examines his work as an organiser and educator, his imprisonment and hunger strike, and how he became the early hero of radical Scottish Independence.
Henry Bell is a writer and editor from Bristol. He edits Gutter Magazine. He is the author of John Maclean: Hero of Red Clydeside (Pluto, 2018), and has edited books including A Bird is Not a Stone (Freight Books, 2014) and Tip Tap Flat (Freight Books, 2012).
END_OF_DOCUMENT_TOKEN_TO_BE_REPLACED 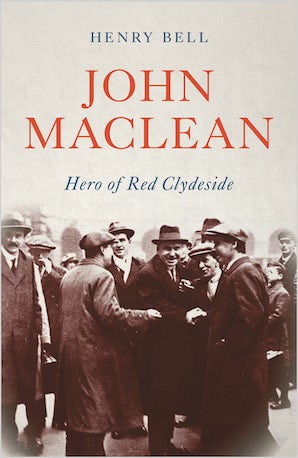 A literary biography of one of the early heroes of radical Scottish Independence.
END_OF_DOCUMENT_TOKEN_TO_BE_REPLACED
All events
X