Foxconn is the world’s largest electronics supplier, manufacturing many of the world’s iPhones, iPads and Kindles. The factory in Shenzhen, China, is one of the busiest in the world, with a continuous 24/7 assembly line to meet the relentless demand for these consumer electronics.

As Jenny Chan and Mark Selden document in their book Dying for an iPhone: Apple, Foxconn, and the Lives of China’s Workers (co-written with Pun Ngai; and published by Pluto Press/Haymarket Books), the conditions at the factory are notoriously grim. Excessive overtime, hostility and violence are regular features on the factory floor and a spate of suicides took place at Foxconn factories in 2010. Workers have fought back on numerous occasions, with one strike in October 2012 involving 3,000 workers downing tools to protest against management abuse at one Foxconn workshop.

Though acts of resistance are usually short-lived, these organizing experiences are hugely valuable as workers formed unions and learned to articulate their demands through collective bargaining. Workers have sought to expose their inhumane treatment using both offline and online methods to mobilize the media and the wider public for support. As well as organising protests and strikes at the factory, the workers also began to amplify their own voices by posting blogs online, writing poetries, and circulating open letters documenting the various abuses. These first-person testimonies and critiques are powerful condemnation of global capitalism, which is creating and perpetuating innumerable human tragedies.

In this webinar, we will analyze the buyer-driven global production chain structures, the impact on Chinese factory workers’ well-being, and the bottom-up struggles initiated by aggrieved workers and their supporters, which include labor non-governmental organizations and university student activists.

Jenny Chan is Assistant Professor of Sociology at The Hong Kong Polytechnic University. She is also the Vice President (2018-2022) of the Research Committee on Labour Movements (RC44) of the International Sociological Association.

Mark Selden is Senior Research Associate in the East Asia Program at Cornell University, Editor of The Asia-Pacific Journal, and Professor Emeritus of Sociology and History at the State University of New York at Binghamton.

Ralph Litzinger is Professor of Cultural Anthropology at Duke University.

Ying Chen is Assistant Professor of Economics and a Faculty Affiliate at the India China Institute, The New School.

It will also include Introductory remarks by Immanuel Ness, series editor for Wildcat.

Dying for an iPhone is part of Wildcat, a book series published by Pluto Press that uncovers the radical militancy which characterises international workers struggles, both contemporary and historical. Looking at diverse topics including proletarianisation and class formation, mass production, gender, affective and reproductive labour, syndicalism and independent unions, and labour and Leftist social and political movements, it is the most comprehensive exploration into workers’ organisation being developed today.

To get 20% off Dying for an iPhone and all other books in the Wildcat series, please visit the Pluto Press website, add the book(s) to the cart and use the discount code ORGANIZE20 at the checkout.

The webinar series is kindly sponsored by Railroad Workers United.

This seminar is co-sponsored by:

The University of Oxford China Centre

END_OF_DOCUMENT_TOKEN_TO_BE_REPLACED 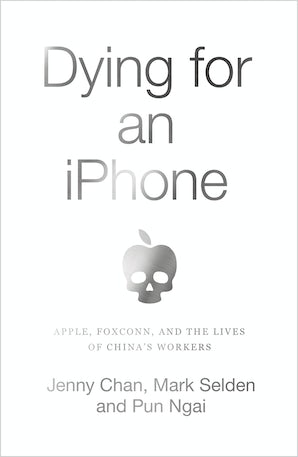 Apple, Foxconn and the Lives of China’s Workers

Based on undercover research, Foxconn and Apple's treatment of workers is revealed
END_OF_DOCUMENT_TOKEN_TO_BE_REPLACED
All events
X