If your eyes glaze over when you read empty phrases like “the peace process” and “the two-state solution,” the bold and honest work of activist and scholar Jeff Halper will be a jolt of truth. This Nobel Peace Prize co-nominee and Pluto Press author is a leading scholar of the military and surveillance technologies of occupation. Halper is a veteran activist working for an end to the illegal demolition of Palestinian homes with the Israeli Committee against House Demolitions (ICHAD) and for a single, democratic state in Israel/Palestine with the grassroots One Democratic State Campaign (ODSC). For this McNally Jackson talk, he is joined by his ‘long-lost non-relative’ Katie Halper, writer and the host of the popular Katie Halper Show.

Jeff Halper is an Israeli anthropologist and Director of the Israeli Committee Against House Demolitions (ICAHD). He has served as the Chairman of the Israeli Committee for Ethiopian Jews, head of Friends World College, an international college program, and has taught at universities in Israel, the US, Latin America, and Africa. He is the author of Obstacles to Peace (2005), An Israeli in Palestine (2008), and War Against the People: Israel, the Palestinians and Global Pacification (Pluto, 2015), which was shortlisted for the Palestine Book Award. He was nominated for the 2006 Nobel Peace Prize. Jeff and ICAHD are currently involved in a joint Palestinian-Israeli grassroots initiative, the One Democratic State Campaign (ODSC).

Katie Halper is a third generation native New Yorker, writer, and the host of the Katie Halper show, a weekly podcast and WBAI radio show whose guests include Glenn Greenwald, Alexandria Ocasio Cortez, Thomas Frank, Norman Finkelstein, Briahna Joy Gray, Max Blumenthal and more. She has written for The Nation, The Guardian, Rolling Stone, has appeared on MSNBC and is a video host for The Young Turks and The Real News Network. She identifies as a feminist Bernie Bro.

END_OF_DOCUMENT_TOKEN_TO_BE_REPLACED 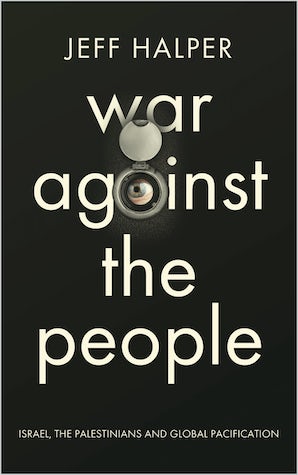 War Against the People

Israel, the Palestinians and Global Pacification

A disturbing insight into the new phenomenon of the 'securocratic' war in the modern policed world, with a focus on the Israeli state.