As part of Mazin's UK tour

Professor Mazin Qumsiyeh is the founder and head of the Palestine Museum of Natural History, part of Bethlehem University, “an Oasis for people and wildlife in a place of conflict and rapid transformation”.

Prof. Mazin Qumsiyeh is truly distinguished, as an academic, an activist and an environmentalist. He counts the following amongst his posts and achievements

He teaches and does research at Bethlehem University in Palestine.

He is founder and director of the Palestine Museum of Natural History, and the Institute for Biodiversity and Sustainability.

He served on the faculties of the University of Tennessee, Duke, and Yale Universities and has published over 150 scientific papers on topics ranging from biodiversity to cancer.

He was chairman of the Palestinian Center for Rapprochement Between People.

He serves on the board of Al-Rowwad Children’s Theater Center in Aida Refugee Camp.

His many books include Mammals of the Holy Land, Sharing the Land of Canaan: human rights and the Israeli/Palestinian Struggle (English, Spanish, and German) and Popular Resistance in Palestine: A history of Hope and Empowerment (Arabic, English, French, forthcoming in Italian).

He also has an activism book published electronically on his website (http://qumsiyeh.org), and has published over 250 letters to the editor and 100 op-ed pieces and interviewed on TV and radio extensively (local, national and international).

Join us for the talk, which will give you a perspective you rarely hear about occupation in Palestine, and may challenge some of the narratives that you hear. But especially to hear about what it is like to be a Christian living amongst a mainly Palestinian Muslim population under Israeli occupation.

The event is free, but we need registration in order to manage numbers. Come join us!

END_OF_DOCUMENT_TOKEN_TO_BE_REPLACED 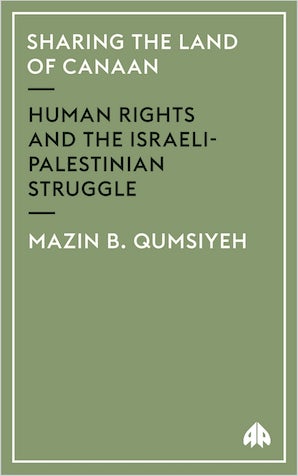 Sharing the Land of Canaan

Human Rights and the Israeli-Palestinian Struggle

Examines human rights issues in the Occupied Territories and lays out plans for a lasting peace.
END_OF_DOCUMENT_TOKEN_TO_BE_REPLACED
All events
X