Special event marking the life and legacy of Peter Fryer

Join us for an evening in tribute to Peter Fryer – writer, communist, and historian – and the lasting legacy of his life and work in contemporary Britain. With speakers including Gary Younge (Guardian columnist and editor-at-large), David Olusoga (historian and broadcaster), and Terry Brotherstone (Peter’s obituarist and labour historian), we draw together the different strands of Peter’s life and work to explore the links between them. We hope to encourage an intergenerational dialogue about the ways cultural diversity has shaped contemporary Britain, and the continued relevance of Peter Fryer’s work today. Discussion will be followed by a drinks reception and a selection of music from Peter’s private collection of early ethnographic records

Peter Fryer (1927-2006) was brought up in Hull, the son of a master mariner of right-wing tendencies. During World War II he joined the Communist Party and became a reporter for the Daily Worker, the official newspaper of the Communist Party of Great Britain. For his first signed report he was sent to cover the arrival of Empire Windrush at Tilbury in June 1948 which brought men and women from the Caribbean to work in post-war Britain.

In 1956 the Daily Worker sent Peter to Budapest to cover the popular uprising against the Soviet-imposed policies of the Hungarian People’s Republic. Expected to follow the Communist Party line, he quickly interpreted the uprising as a revolt against Stalinist oppression and sided with the Hungarian workers. The Soviets sent a massive military force into Budapest to crush all armed resistance. On his return to Britain he wrote within a week a book in passionate defence of the revolutionaries,Hungarian Tragedy, which led to his break with the CPGB.

After brief alignment with the Trotskyist movement, unable to find an organisation in which he could express his political beliefs, he became a freelance writer, notably against censorship. As a young reporter, Peter had welcomed the Windrush arrivals and he had followed their later experiences of life in Britain. He was outraged by their accounts of hostility and prejudice. When their children came under police attack in the 1981 inner-city uprisings in several parts of England he felt an urgency to act in their support and started work on his seminal Staying Power: the History of Black People in Britain, first published in 1984. It recovered the untold stories of Black Britons whose histories had been silenced and highlighted the role of the of the British slave trade in creating the wealth that led to the Industrial Revolution. A recent interview with historian David Olusoga discusses the wider importance of the book and its relevance today:https://www.plutobooks.com/blog/podcast- staying-power-with-david-olusoga.

Peter Fryer’s writings, apparently diverse and relevant to different groups of people, are unified at one level by his passionate humanism, his belief in the value and agency of individual human beings and an equally passionate political conviction that the world is changeable and collectively we can change it. We hope this event in tribute to his life and work will stimulate discussion and debate from multiple perspectives.

This event has been supported by University College London Grand Challenge of Cultural Engagement Office, Pluto Press, the Movement for Socialism and the Fryer family.

Some titles from Peter Fryer’s extensive bibliography include:

The Birth Controllers. 1965
Private Case – Public Scandal. 1966
Staying Power. The History of Black People in Britain. 1984
Crocodiles in the streets. A report on Latin America. 1987.
Black People in the British Empire. An introduction. 1988.
The Politics of British Black History. By Peter Fryer and Julia Bush. 1991
Lucid, Vigorous and Brief. Advice to New Writers. 1993
The Politics of Windrush. [Edited by Clare Cowen.] 1999
Rhythms of Resistance. African Musical Heritage in Brazil. 2000

END_OF_DOCUMENT_TOKEN_TO_BE_REPLACED 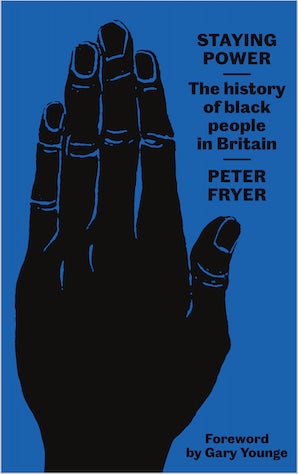 The classic history of black people in Britain, an epic story that spans the Roman conquest to the present day.
END_OF_DOCUMENT_TOKEN_TO_BE_REPLACED
All events
X