Pluto Live and Marx Memorial Library are delighted to host the official book launch for Raquel Varela’s new book A People’s History of the Portuguese Revolution published by Pluto Press. Raquel will be joined by Peter Robinson, Bob Light and chair Joana Ramiro.

On the 25th April 1974, a coup destroyed the ranks of Portugal’s neo-fascist Estado Novo government as the Portuguese people flooded the streets of Lisbon, placing red carnations in the barrels of guns and demanding a ‘land for those who work in it’.

This became the Carnation Revolution – an international coalition of working class and social movements, which also incited struggles for independence in Portugal’s African colonies, the rebellion of the young military captains in the national armed forces and the uprising of Portugal’s long-oppressed working classes. It was through the organising power of these diverse movements that a popular-front government was instituted and Portugal withdrew from its overseas colonies.

Cutting against the grain of mainstream accounts, Raquel Varela explores the role of trade unions, artists and women in the revolution, providing a rich account of the challenges faced and the victories gained through revolutionary means.

Raquel Cardeira Varela is a Professor at New University of Lisbon, and Senior Visiting Professor at the Fluminense Federal University. She is also president of the International Association of Strikes and Social Conflicts and co-editor of its journal. She is the author of A People’s History of the Portuguese Revolution (Pluto, 2018).

Peter Robinson edited the English edition of A People’s History of the Portuguese Revolution. He was in Portugal for some of the time as a political organiser for the British International Socialists and subsequently interviewed and wrote about these amazing events including a M Phil thesis in 1999, called ‘Workers’ Councils in Portugal 1974–1975’.

Bob Light is a sacked dock worker and retired film lecturer now writing a book on the Italian partisans.

The event will be chaired by Joana Ramiro, a journalist, researcher and broadcaster living in London, from where she writes for a variety of publications including The Independent, New Statesman and Vice. She was born in Lisbon and has written about Britain and Brexit for Portuguese newspapers I and Publico.

Tickets are £3 each (plus fees) and can each be redeemed against a copy of A People’s History of the Portuguese Revolution (RRP: £19.99).

Pluto Live is a specially curated series of events featuring Pluto Press authors in conversation with leading figures on the left, discussing radical politics and other big ideas.

Please join the Pluto Press mailing list to hear about our events, new books, podcasts and videos. You’ll also receive exclusive offers on books and merchandise throughout the year.

END_OF_DOCUMENT_TOKEN_TO_BE_REPLACED 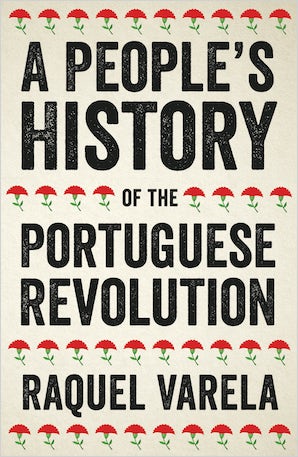 A rich history of Portugal's Carnation Revolution, told by its trade unionists, activists, workers and women.
END_OF_DOCUMENT_TOKEN_TO_BE_REPLACED
All events
X