The Scottish independence debate has consequences for Scotland, British politics, the future of the UK – and internationally. In Scotland Rising, Gerry Hassan addresses the key questions in this debate with a deep dive into its history, beyond the usual references to Thatcherism, Toryism and Westminster, by analysing the relative decline of the UK, the nature of the British state, its capitalist economy and politics that underpin it. At the same time, a distinctive, autonomous Scotland has emerged beyond Nichola Sturgeon’s SNP and independence that has demanded more self-government.

Scotland Rising highlights the importance of culture, stories and collective voices in reshaping how people see Scotland, both in during the first referendum in 2014 and again today. This debate is of relevance to everyone in the UK, including England, Wales and Northern Ireland. Can politics and democracy liberate people from the wreckage of Westminster? And if the Scots can, could it inspire others? Scotland Rising is a must-read for anyone with an interest in the future of Scotland and the UK.

Gerry Hassan is a leading commentator on Scottish politics and independence. He is Professor of Social Change at Glasgow Caledonian University and the author of many books including The Strange Death of Labour Scotland, The People’s Flag and the Union Jack and Caledonian Dreaming. He has written for The Guardian, openDemocracy, Bella Caledonia, The Scotsman, New Statesman and the Irish Times.

END_OF_DOCUMENT_TOKEN_TO_BE_REPLACED 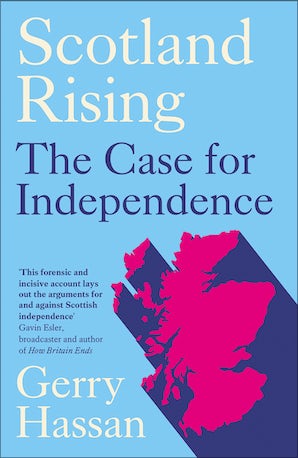