Dave will be discussing his recent book at the Lighthouse Bookshop, Edinburgh

Musicians have often wanted to change the world. From underground grime artists to pop icons, many have believed in the political power of music. Rulers recognise it too. Music has been used to unsettle the most fundamental political and social conventions – and to prop up the status-quo.

Sound System is the story of one musician’s journey to discover what makes music so powerful. Years of touring, playing and protesting have given Dave Randall a unique insider’s view of the music industry, enabling him to shed light on the secrets of celebrity, commodification and culture. He finds remarkable examples of music as a force for social change as well as something that has been used to keep people in their place throughout history.

This is a book of raves, riots and revolution. From the Glastonbury Festival to the Arab Spring, Pop Idol to Trinidadian Carnival, Randall finds political inspiration across the musical spectrum and poses the question: how can we make music serve the interests of the many, rather than the few?

Join us in the bookshop for what is sure to be a stimulating and engaging event with one of Britain’s most notable activist musicians. Dave will be giving a talk, followed by an opportunity for Q&A and a book signing.

Booking is recommended – the first 20 places are free, after which spots will be just £3, redeemable against the book.

END_OF_DOCUMENT_TOKEN_TO_BE_REPLACED 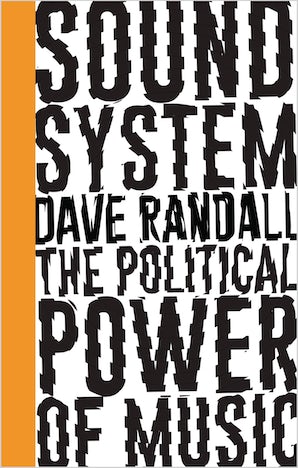 The story of one musician's journey to discover how music can be used as a political tool.