An uncovering of the terrifying depths of authoritarian power that hide behind the infamous story of WikiLeaks.

It is 2008, and Stefania Maurizi, an Italian investigative journalist with a growing interest in cryptography, starts looking into the little-known organisation WikiLeaks. Through hushed meetings, encrypted files and explosive documents, what she discovers sets her on a life-long journey that takes her deep into the realm of secret power

She has just released her latest book “Secret Power. WikiLeaks and Its Enemies”. At the heart of it is the brutality of secret power and the unbearable price paid by Julian Assange, WikiLeaks and truthtellers.

‘I want to live in a society where secret power is accountable to the law and to public opinion for its atrocities, where it is the war criminals who go to jail, not those who have the conscience and courage to expose them.’

She will be interviewed by former Guardian journalist and Pulitzer Prize winner Ewen MacAskill.

END_OF_DOCUMENT_TOKEN_TO_BE_REPLACED 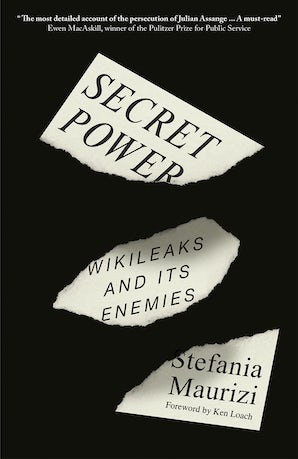