New York book launch with a response by Sebastian Franklin

Join us at e-flux to celebrate the launch of Jonathan Beller’s newest book The Message is Murder: Substrates of Computational Capital, published by Pluto Press (2017). The evening will feature an introduction to the book by the author, and a response by Sebastian Franklin.

Written as a wake-up call to the field of media studies, The Message is Murder analyzes the violence bound up in the everyday functions of digital media. At its core is the concept of ‘computational capital’ – the idea that capitalism itself is a computer, turning qualities into quantities, and that the rise of digital culture and technologies under capitalism should be seen as an extension of capitalism’s bloody logic.

Engaging with Borges, Turing, Claude Shannon, Hitchcock and Marx, this book tracks computational capital to reveal the lineages of capitalized power as it has restructured representation, consciousness, and survival in the twentieth and twenty-first centuries. It argues that the global intensification of inequality relies on the discursive, informatic, and screen-mediated production of social difference.

Ultimately, The Message is Murder makes the case for recognizing media communications across all platforms – books, films, videos, photographs, and even language itself – as technologies of political economy, entangled with the social contexts of a capitalism that is inherently racial, gendered, and genocidal.

Jonathan Beller is Professor of Humanities and Media Studies at Pratt Institute. His books and edited volumes includeThe Cinematic Mode of Production: Attention Economy and the Society of the Spectacle; Acquiring Eyes: Philippine Visuality, Nationalist Struggle and the World-Media System; The Message is Murder: Substrates of Computational Capital; and Feminist Media Theory (a special issue of The Scholar and Feminist Online). His current book projects include Computational Capitaland The Fourth Determination. Beller has been a fellow at the Barnard Center for Research on Women and Gender, serves on the editorial collective of Social Text, and is the director of The Graduate Program in Media Studies at Pratt.

END_OF_DOCUMENT_TOKEN_TO_BE_REPLACED 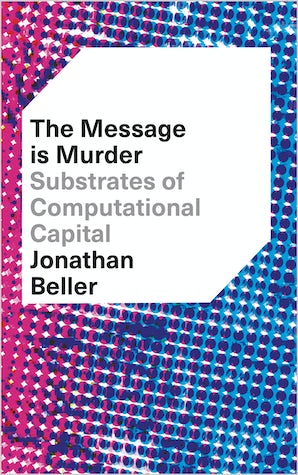 A compelling case for recognising media communications as technologies of political economy.