In 2008, Rizwaan Sabir was a simple student conducting research for his postgraduate degree at Nottingham University.
His life took a dramatic turn when the 27-year-old was arrested by West Midlands anti-terrorism police after he downloaded a manual from a US government website for his research which could be bought at WH Smith, Waterstones and Amazon as well as the university’s own library.
After seven days and six nights in police custody, Rizwaan was released without charge or apology. It was later found that the police had “made up” notes to fabricate a case against him.
After his release, his ordeal did not end. He was subjected to a range of surveillance measures including stop and search at the roadside, detentions at the border, monitoring by police and government departments, and an attempt by the UK military to recruit him into their psychological warfare unit.
Yet, these experiences did not deter Rizwaan. He fought and obtained compensation from the police for his arrest. He also continued his studies, and became one of the most acclaimed researchers on British policing of Muslims.
In his first book,”The Suspect – Counterterrorism, Islam, and the Security State”, Dr Rizwaan Sabir writes publicly for the first time about the traumatising mental health effects of these experiences, and argues that these harmful outcomes are not mere mistakes, but the consequences of using a counterinsurgency warfare approach to police Muslims.
Join Dr Rizwaan Sabir, Moazzam Begg, Dr Asim Qureshi and Suhaiymah Manzoor Khan to discuss the book and reflect on the impact two decades of community harassment and islamophobic policing have had on the state of mind of Muslims in Britain.
END_OF_DOCUMENT_TOKEN_TO_BE_REPLACED 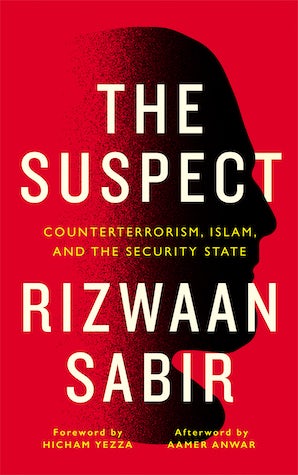