The vengeance of unpayable debts

~~~~~~~~~~~
REGISTRATION
~~~~~~~~~~~
Please use the following link to register your email address. A link to the Zoom webinar will be sent to you in the days prior to the event.
https://forms.gle/9KdDW68926fHKWGEA
~~~~~~~~~~
DESCRIPTION
~~~~~~~~~~
– How do debts function, yesterday and today, as racial capitalim’s revenge?
– Can debt be a grounds for emergent solidarities, today and tomorrow?
– What are the oppressed owed?
-How might those debts be reclaimed?

As the late David Graeber’s bestseller Debt: The First 5,000 Years taught us, unpayable debts have long been a tool that the powerful used to subjugate the oppressed. No less today when, as Denise Ferreira da Silva shows, the weight of debt disproportionately falls on the shoulders of those already encumbered by the burdens of racialization. But da Silva also encourages us to recognize the kinds of unpayable debts we owe to one another, to ancestors and to common struggle that might be the grounds of (re)emergent solidarity. Likewise Frances Negrón-Muntaner’s investigation of Puerto Rico’s colonial unpayable debt reveals that artists, activists and intellectuals are seizing the moment to ask profound questions of who really owes whom what. Likewise, the activist group Debt Collective is seeking to organize otherwise isolated debtors into a union of collective refusal and reinventing solidarity along the way. Can such efforts truly challenge a form of global racial capitalism that appears, as Max Haiven argues, to be taking a kind of nihilistic revenge on the planet?
~~~~~~~~
SPEAKERS
~~~~~~~~
DENISE FERREIRA DA SILVA is currently Professor and Director of the Social Justice Institute (GRSJ) at the University of British Columbia, Canada. Her academic and artistic work address the ethical-political challenges of the global present. She is the author of Toward a Global Idea of Race (2007) and co-editor of Race, Empire, and the Crisis of the Subprime (2013, with Paula Chakravartty) as well as Postcolonialism and the Law: Major Works (2018, with Mark Harris) and Indigenous Peoples & the Law: Major Works (2019, with Mark Harris). Her book Unpayable Debt will be published in 2021.

FRANCES NEGRON-MUNTANER is an award-winning filmmaker, writer, and scholar and professor of English and Comparative Literature at Columbia University. She is the editor of several books, including Puerto Rican Jam: Rethinking Nationalism and Colonialism; None of the Above: Puerto Ricans in the Global Era, and Sovereign Acts. She is a director of the Unpayable Debts Working Group of Columbia’s Centre for the Study of Social Difference which compiled three open-access syllabuses on debt regarding Puerto Rico, the Caribbean and Global Debts.

MAX HAIVEN is Canada Research Chair in Culture, Media and Social Justice at Lakehead University, located on Anishinaabe lands on the North shore of Gichi-Gami under the Robinson-Superior Treaty (Thunder Bay, Canada). He is co-director of the ReImagining Value Action Lab (RiVAL). His most recent book is Revenge Capitalism: The Ghosts of Empire, the Demons of Capital, and the Settling of Unpayable Debts. Haiven is editor of VAGABONDS, a series of short, radical books from Pluto Press. The present panel emerges in part from work Haiven undertook as a visiting scholar at UCL’s Institute for Advanced Studies in 2020.

HANNAH APPEL is an Associate Professor of Anthropology at Global Studies at UCLA where she teaches, researches, and writes about the daily life of capitalism and its immanent alternatives. Hannah is also the Associate Director of the Institute on Inequality & Democracy at UCLA, where she directs the Future of Finance research stream. She is the author, most recently, of The Licit Life of Capitalism: US Oil in Equatorial Guinea (2019), and a co-author of Can’t Pay Won’t Pay: the Case for Financial Disobedience and Debt Abolition (2020). Hannah co-wrote the latter with her co-conspirators at the Debt Collective, a militant, debtor-powered activist group that builds debtors’ unions.

END_OF_DOCUMENT_TOKEN_TO_BE_REPLACED 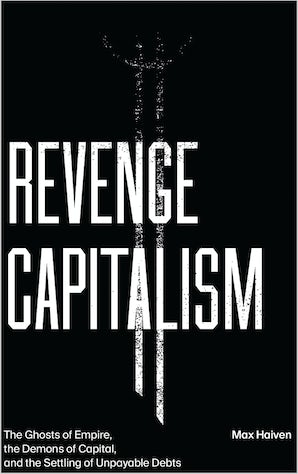