Join us for the double book launch of Where the New World Is: Literature about the U.S. South at Global Scales by Martyn Bone & Wobblies of the World: A Global History of the IWW edited by Dave Struthers.

The authors will give an introduction to the books: Martyn will speak about “Nella Larsen and Denmark” (subject of the second chapter), and Dave will talk about the global dimensions of the IWW through the subject “An Injury to One is an Injury to All’: Solidarity and the Global History of the Industrial Workers of the World”

Where the New World Is by Martyn Bone assesses how fiction published since 1980 has resituated the U.S. South globally and how earlier twentieth-century writing already had done so in ways traditional southern literary studies tended to ignore. Martyn Bone argues that this body of fiction has, over the course of some eighty years, challenged received readings and understandings of the U.S. South as a fixed place largely untouched by immigration (or even internal migration) and economic globalization. Published by University of Georgia Press.

Wobblies of the World: A Global History of the IWW edited by Dave Struthers, Peter Cole & Kenyon Zimmer. Founded in 1905, Chicago’s Industrial Workers of the World (IWW) is a union unlike any other. With members affectionately called “Wobblies” and an evolutionary and internationalist philosophy and tactics, it rapidly grew across the world. Considering the history of the IWW from an international perspective for the first time, Wobblies of the World brings together a group of leading scholars to present a lively collection of accounts from thirteen diverse countries, revealing a fascinating story of anarchism, syndicalism, and socialism. Published by Pluto Press:

About the authors:
Martyn Bone is Associate Professor of American literature and coordinator of the Center for Transnational American Studies at the Department of English, Germanic and Romance Studies, University of Copenhagen.

David M. Struthers is a historian of race and transnational radical organizer and Adjunct Assistant Professor at the University of Copenhagen.

END_OF_DOCUMENT_TOKEN_TO_BE_REPLACED 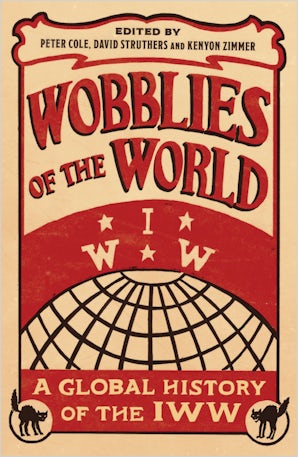 A history of the global nature of the radical union, The Industrial Workers of the World
END_OF_DOCUMENT_TOKEN_TO_BE_REPLACED
All events
X