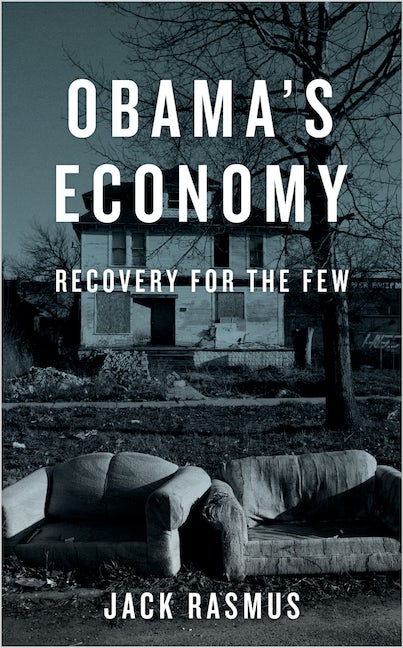 Recovery for the Few

Informed critical economist takes Obama to task for presiding over a failing and unequal US economy.

Radical economist Jack Rasmus shows how the Obama administration failed to deliver on its promises of economic recovery and social justice and puts forward alternative proposals for how the administration could have realised these goals.

In the period of Obama’s presidency, corporate profits were up, and economic hardship was the bitter reality for millions of US citizens. Rasmus argues that the weakest economic recovery since 1947 was the direct result of the Obama administration's failure to take decisive action. Analysing deficit cutting, the fear of a global depression, tactical populism and austerity, this book is a clear and cutting antidote to current liberal narratives.

From Obama's presidential election to the passage of his 2012 budget, this book explains how the US economy failed and why the risk of a 'double dip' recession was on the cards.

Jack Rasmus is a Professor of Economics at St Marys College and Santa Clara University, both in California. He is author of Obama's Economy: Recovery for the Few (Pluto, 2012) and Epic Recession: Prelude to Global Depression (Pluto, 2010). He has been a business economist, market analyst and vice-president of the National Writers Union.

'Everybody else talked of the Lehman crisis as a blip, but Rasmus got it right: his concept of 'epic recession' describes what happened, in America and in the Western world' - Paul Mason, BBC Newsnight Economics Editor, author of Meltdown: The End of the Age of Greed and Live Working or Die Fighting: How the Working Class Went Global

'Rasmus describes in detail how Obama was the most conservative and business-oriented of the Democratic candidates in 2008, and how his first-term economic policies reflected that orientation' - Chuck Mack, International Vice-President, International Brotherhood of Teamsters Union

'Gives new meaning to common sense economics. While working people reel in the downward spiralling economy, Rasmus analyses how we got where we are and makes recommendations for sustained economic growth and recovery' - Donna DeWitt, President, South Carolina AFL-CIO

'A revealing expos&eacute;' - Nancy Wohlforth, Co-Covenor, US Labor Against War

Introduction
1. The Weakest, Most Lopsided Recovery
2. From Tax Cuts To Tactical Populism
3. Obama’s Jobless-Homeless Stimulus
4. A Record Short, Faltering Recovery
5. How More Is Less Of The Same
6. Historical Parallels And The 2010 Midterm Elections
7. Deficit Cutting On The Road To Double Dip
8. Sliding Toward Global Depression?
9. From Failed Recovery To Austerity Recession
10. An Alternative Program For Economic Recovery
Notes
Index
Published by Pluto Press in Apr 2012
Paperback ISBN: 9780745332185
eBook ISBN: 9781849646956