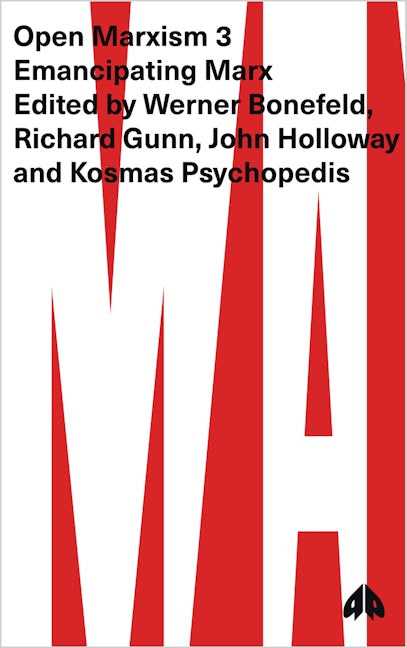 Publication of the first two volumes of Open Marxism has renewed interest in a theoretical tradition which, during the 1980s seemed to have lost momentum. The series aims to 'open' the theoretical categories of Marxism to actuality, to renew old debates and to project new ones. Within the framework of 'openness', the authors of this long-awaited third volume address a wide range of topics which have become classic in Marxist debate, including dialectics, epistemology, social emancipation, value theory, historical materialism and the relationship between feminism and Marxism. provides a forum for open debate on the key theoretical questions of the decade.

The contributors argue that sociological heritage which grew up under the banner of scientific Marxism has had a detrimental effect on the movement of socialist thinking. The 'emancipation of Marx' implies both freeing Marx from the understanding of the 20th Century and the freeing of the human spirit from the control of capital. The contributors have been selected from an international base and none have previously contributed to the series. The issues covered are of contemporary relevance and, along with the first two volumes, this third examination of 'open Marxism' provides the basis for a radical rethink on restructuring the world in which we live.

John Holloway is Professor of Sociology in the Instituto de Ciencias Sociales y Humanidades of the Benemerita Universidad Autonoma de Puebla in Mexico. He is the author of Crack Capitalism (Pluto, 2010), Change the World Without Taking Power (Pluto, 2019) and Negativity and Revolution (Pluto, 2008).

1. Introduction: Emancipating Marx by Werner Bonefeld, Richard Gunn, John Holloway and Kosmas Psychopedis
2. Capitalism and Reproduction by Mariarosa Dalla Costa Professor
3. Emancipating Explanation by Kosmas Psychopedis
4. Why did Marx Conceal his Dialectical Method? by Helmut Reichelt (University of Bremen)
5. Hegel's Philosophy of Right and Marx's Critique: A Reassessment by Robert Fine (University of Warwick)
6. The Dialectics of Rights: Transitions and Emancipatory Claims in the Marxian Tradition by Manolis Angelidis
7. The Complicity of Posthistory by Adrian Wilding (University of Warwick)
8. From Scream of Refusal to Scream of Power: The Centrality of Work by John Holloway
9. Capital as Subject and the Existence of Labour by Werner Bonefeld
Index