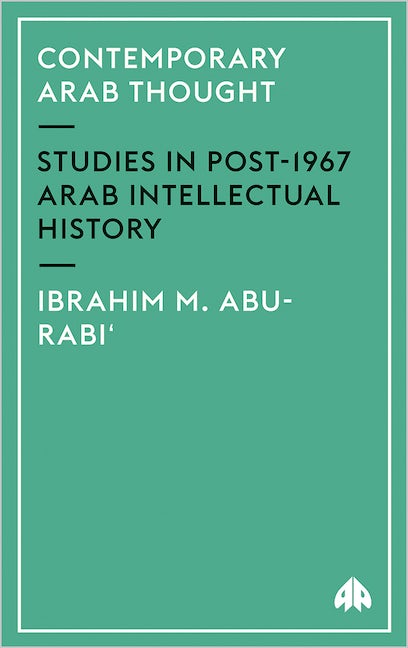 First comprehensive book on the history and development of Arab philosophy, tackling major issues and key thinkers
Contemporary Arab Thought is a multifaceted book, encompassing a constellation of social, political, religious and ideological ideas that have evolved over the past two hundred years - ideas that represent the leading positions of the social classes in modern and contemporary Arab societies.

Distinguished Islamic scholar Ibrahim Abu-Rabi' addresses such questions as the Shari'ah, human rights, civil society, secularism and globalisation. This is complimented by a focused discussion on the writings of key Arab thinkers who represent established trends of thought in the Arab world, including Muhammad Abid al-Jabiri, Adallah Laroui, Muhammad al-Ghazali, Rashid al-Ghannoushi, Qutatnine Zurayk, Mahdi Amil and many others.

Before 1967, some Arab countries launched hopeful programmes of modernisation. After the 1967 defeat with Israel, many of these hopes were dashed. This book retraces the Arab world's aborted modernity of recent decades. Abu-Rabi explores the development of contemporary Arab thought against the historical background of the rise of modern Islamism, and the impact of the West on the modern Arab world.

Ibrahim M. Abu-Rabi' is the holder of the Edmonton Council of Muslim Communities Chair of Islamic Studies at the University of Alberta. His many books include The Contemporary Arab Reader on Political Islam (Pluto, 2010), Myth and Reality in the Contemporary Islamist Movement (Pluto, 2005), and The Blackwell Companion to Contemporary Islamic Thought (Blackwells, 2006).