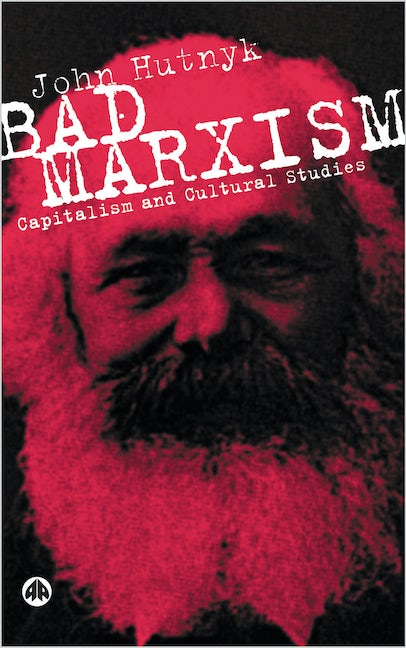 Critical political analysis of how Cultural Studies has used and abused Marxism, offering a close reading of Derrida and Negri.

Cultural Studies commonly claims to be a radical discipline. This book thinks that's a bad assessment. Cultural theorists love to toy with Marx, but critical thinking seems to fall into obvious traps.

After an introduction which explains why the 'Marxism' of the academy is unrecognisable and largely unrecognised in anti-capitalist struggles, Bad Marxism provides detailed analyses of Cultural Studies' cherished moves by holding fieldwork, archives, empires, hybrids and exchange up against the practical criticism of anti-capitalism.

Engaging with the work of key thinkers: Jacques Derrida, James Clifford, Gayatri Spivak, Georges Bataille, Homi Bhabha, Michael Hardt and Toni Negri, Hutnyk concludes by advocating an open Marxism that is both pro-party and pro-critique, while being neither dogmatic, nor dull.

'Hutnyk packs more dynamite in his sentences than any other writer I know. He is among the finest Marxist polemicists writing today. There are none who can be as devastating in their critique of commodification' - Amitava Kumar, Associate Professor, Penn State University 'John Hutnyk is a very fine thinker, a sharp analyst of what is wrong with the academy and a careful reader, at the same time, of those ideas he won't always go along with' - Vijay Prashad, author of Keeping Up with the Dow Joneses: Debt, Prison, Workfare (South End Press)
Introduction: Cultural Studies as Capitalism
Part I: Clifford's Ethnographica
1. Clifford and Malinowski
2. Fort Ross Mystifications
Part II: [email protected]
3. Fever
4. Spectres
5. Struggles
Part III: Tales from Raj
6. On Empire
7. Difference and Opposition
8. The Chapatti Story
Part IV: Bataille's Wars: Surrealism, Marxism, Fascism
9. Librarian
10. Activist
11. Anthropologist
12. Provocateur
Conclusion: The Cultivation of Capital Studies
Notes
References
Index
Published by Pluto Press in Jun 2004
Paperback ISBN: 9780745322667