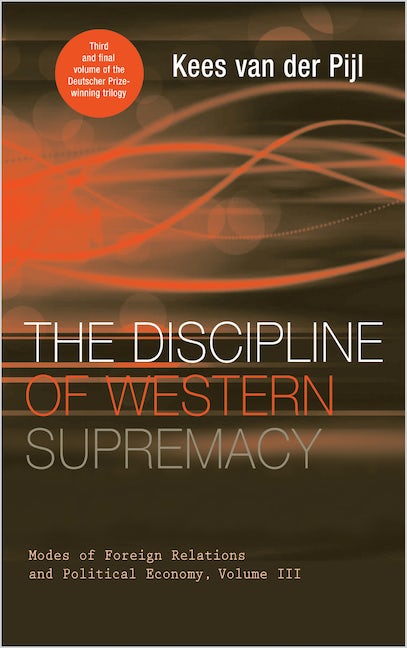 The Discipline of Western Supremacy

In The Discipline of Western Supremacy Kees van der Pijl argues that, from the late European Middle Ages, Anglophone thinkers articulated an imperial world-view which was adopted by aspirant elites elsewhere. Nation-state formation under the auspices of the English-speaking West has henceforth informed thinking about international affairs. After decolonisation the study of comparative politics continued to develop under those same auspices as part of a comprehensive framework.

As the first major sociological analysis of the field of International Relations, this book advances a comprehensive overview of mainstream IR as a set of theories which translate Western supremacy into intellectual hegemony.

Kees van der Pijl is a Fellow of the Centre for Global Political Economy and Professor Emeritus at the University of Sussex. His books include The Disciple of Western Supremacy (Pluto, 2014) The Foreign Encounter in Myth and Religion (Pluto, 2010), the Deutscher prize-winning Nomads, Empires, States (Pluto, 2007).

'Challenges us to understand the world in its full complexity and contradictory actuality' - Peter Bratsis, Lecturer in Political Theory, University of Salford 'A work to ponder and challenge and be challenged by as it exposes the intellectual and political origins of the operations of American academia' - Irene Gendzier, Boston University (Emeritus) 'Concluding an intellectually ambitious trilogy covering international relations across the ages, this audacious analysis of the American discipline of international relations is self-consciously written from the margin' - Peter J. Katzenstein, Walter S. Carpenter Jr., Professor of International Studies, Cornell University 'Shows in an incredibly informed and fascinating way the historical roots and, mechanisms of the making of this supremacy. And its severe crisis. Historical materialist analysis at its best' - Prof. Dr. Ulrich Brand, Chair of International Politics at the University of Vienna
Preface
Acknowledgements
1. Empire and Nationality in the Pax Britannica
2. The Crusade for Democracy and World Politics
3. Cold War Discipline in International Relations
4. The Pax Americana and National Liberation
5. The Crisis of International Discipline
References
Index
Published by Pluto Press in Jan 2014
Hardcover ISBN: 9780745323183
eBook ISBN: 9781849648899