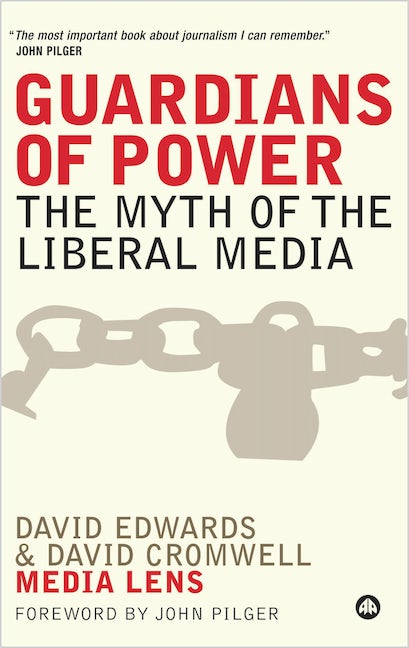 The Myth of the Liberal Media

'The most important book about journalism I can remember.' John Pilger
Guardians of Power is a thought-provoking and controversial challenge to the idea that western media is unbiased, fearless and open to different ideas.

This book argues that a corporate media system be never be expected to tell the truth about a world dominated by corporations. It challenges the complacent view that newspapers, including the 'liberal' Guardian and the Independent, tell the truth about climate change, war and problems in society when they are profit-oriented businesses dependent on advertisers for 75% of their revenues.

Guardians of Power is a radical intervention which will spark debate amongst media students and journalists, and all those who believe in the values of a free and independent media.

'Regular critical analysis of the media, filling crucial gaps and correcting the distortions of ideological prisms, has never been more important. Media Lens has performed a major public service by carrying out this task with energy, insight, and care' - Noam Chomsky 'I really cannot do justice to this superb, devastating book ...It is not merely excellent, it is outstanding. Buy it. Read it. Use it.' - Morning Star Online 'The development of Media Lens may permit it soon to have the power to act as an alternative source and a correcting influence on the gross distortions in the news we receive at present' - Henry McCubbin, The Spokesman
Acknowledgements
Foreword by John Pilger
1 The Mass Media – Neutral, Honest, Psychopathic
2 Iraq – The Sanctions of Mass Destruction
3 Iraq Disarmed – Burying the 1991-98 Weapons Inspections
4 Iraq – Gunning For War And Burying The Dead
5 Afghanistan – Let Them Eat Grass
6 Kosovo – Real Bombs, Fictional Genocide
7 East Timor – The Practical Limits Of Crusading Humanitarianism
8 Haiti – The Hidden Logic Of Exploitation
9 Idolatry Ink – Reagan, The ‘Cheerful Conservative’ And ‘Chubby Bubba’ Clinton
10 Climate Change – The Ultimate Media Betrayal
11 Disciplined Media – Professional Conformity To Power
12 Towards A Compassionate Media
13 Full Human Dissent
Resources
Index
Published by Pluto Press in Dec 2005
Paperback ISBN: 9780745324821
eBook ISBN: 9781783710713